Iran to begin opening schools May 16 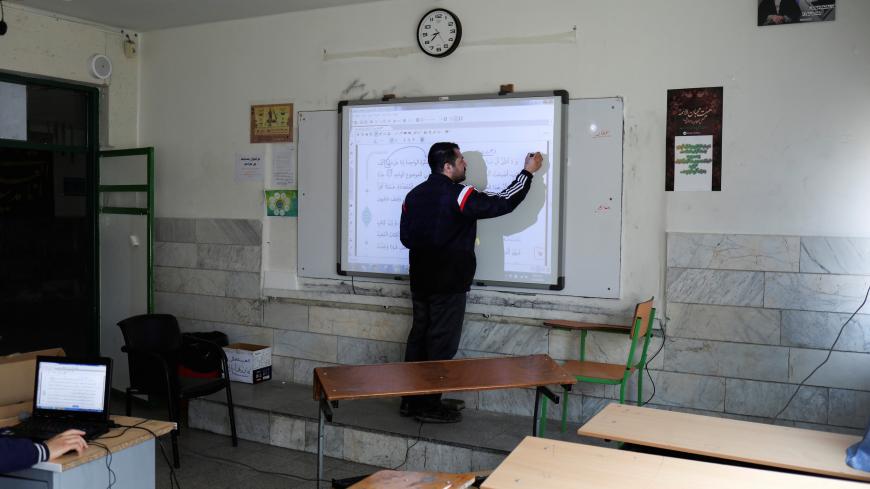 An Arabic language teacher writes on a board while teaching online school classes to students at their homes, as schools are still closed, following the outbreak of the coronavirus disease (COVID-19), in Tehran, Iran April 15, 2020. - WANA (West Asia News Agency)/Ali Khara via REUTERS

After opening mosques and religious sites in a number of cities with low coronavirus infection rates this week, Iran’s President Hassan Rouhani announced yesterday May 3 that they will open schools beginning May 16.

Mohsen Haji Mirzaei, Iran’s Education Minister, said today that at the National Headquarters for Combatting Coronavirus made the decision to open schools in cities that are in what they refer to as “low risk” or “white” regions. Iran has adopted a color system to identify cities with high (red) and low (white) infection rates of the virus. According to Mirzaei, at the moment there are 130 cities that are labeled low risk and would allow schools to reopen given that the health guidelines designated by the health ministry are followed. He did not elaborate on what the health guidelines would be.

Deputy Education Minister Razvan Hakimzadeh said that the reopening of schools will give teachers a months time to catch students up and administer tests. She said that due to discrepancies in access to technology and other materials for some students, the Education Ministry wants to ensure that all students are caught up by the end of the school year.

Starting this week, Iran has also opened mosques and religious sites in cities with low infection rates. A statement released by the health ministry asked mosques that reopen to maintain social distancing, conduct daily monitoring, require all attendees to wear masks and gloves, use single-use plastic bags to hold shoes when inside the mosque, refrain from serving tea or food and provide hand sanitizers at the entrance. The statement also said that mosques which open will only be permitted to hold Friday prayers and cannot be used for other services, such as funerals or religious mourning ceremonies.

According to Nasrallah Lotfi, deputy of Coordination Council of Islamic Propaganda, this year’s Quds Day marches will take place in cities with low infection rates. Quds Day — from the word for Jerusalem in Arabic — is held on the last Friday of Ramadan in support of Palestinians. Lotfi said that this year’s Quds Day marches are important given what he described as the role of Israel in the assassination of former Quds Force commander Qassem Soleimani and the so-called "Deal of the Century" proposed by the White House. The march is scheduled to take place May 22 but will likely be a much smaller affair than previous years given that Tehran likely not will participate due to the coronavirus pandemic.

Despite the labeling of areas as “white” or “low risk” and statements about opening up schools and mosques, Jahanpour warned, “We’re still in the phase of managing this virus and under no conditions at any point in the country are we witnessing normal conditions.” He added, “Our recommendation is to follow health standards, social distancing and using masks in crowded or high traffic areas.”

by Murielle KASPRZAK and Joseph SCHMID | AFP | May 26, 2022
END_OF_DOCUMENT_TOKEN_TO_BE_REPLACED