An international team of lawyers will represent Azeri-Turkish billionaire Mubariz Mansimov Gurbanoglu, a shipping magnate who has been held on terrorism charges in Istanbul since March 17. 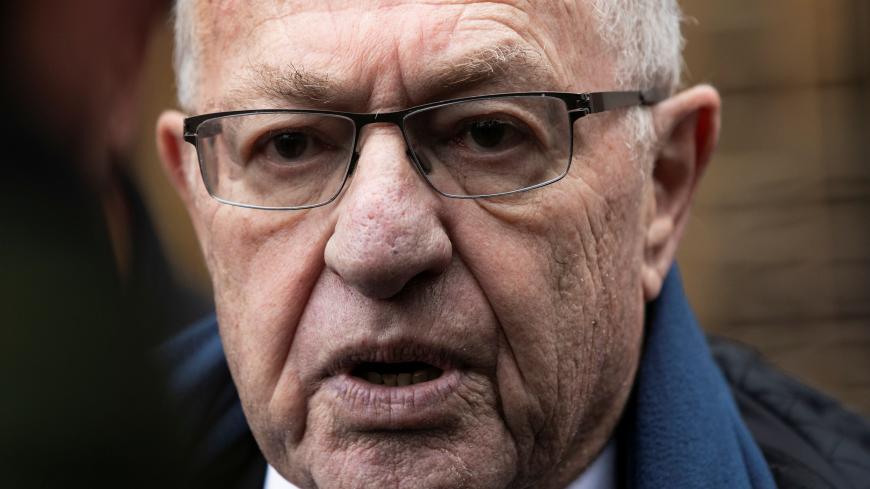 A star-studded team of global lawyers have taken on the case of Azeri-Turkish billionaire Mubariz Mansimov Gurbanoglu, saying they will investigate possible human rights abuses against the shipping magnate who has been held on terrorism charges in an Istanbul prison since March 17.

Alan Dershowitz, a high-profile defender of US President Donald Trump who argued that Trump should not be impeached at his February trial, is among the lawyers working with Gurbanoglu, according to a statement by London law firm Omnia Strategy.

Nick Muzin, a former Qatar lobbyist who previously worked for Sens. Ted Cruz, R-Texas, and Tim Scott, R-S.C., as well as Cherie Blair, are working with Dershowitz. They will have their work cut out for them.

The 52-year-old Gurbanoglu is accused of links to Fethullah Gulen, the Pennsylvania-based Sunni cleric Turkey holds responsible for the July 2016 attempt to bloodily overthrow Turkish President Recep Tayyip Erdogan. Thousands of people including journalists, judges and wealthy industrialists have been jailed on flimsily evidenced charges of conspiring with Gulen, part of a broader campaign to pursue and pressure dissidents of all hues.

“We are repeatedly seeing the misuse of criminal justice systems to target legitimate business executives who fall out of favor. This is driven by a lack of respect for fundamental rights and enabled by a dangerous weakening of the rule of law. This case raises many troubling questions regarding prosecutorial and judicial independence and arbitrary detention. We will investigate this fully and seek answers,” said Blair.

Adam Smith Anthony, a partner at Omnia Strategy, confirmed in a telephone interview with Al-Monitor that Gurbanoglu has not yet been charged. “We will be examining all and any human rights violations to do with his detention and ensuring that a fair trial is accorded and due process is observed.” He declined to elaborate on the substance of the case.

Gurbanoglu protests his innocence, saying he is the victim of a conspiracy led by Rovnag Abdullayev, the president of Azerbaijan’s state oil company, SOCAR. In a March 18 statement, SOCAR denied those claims.

Gurbanoglu owns one of the world’s largest tanker fleets and is embroiled in a multi-billion-dollar arbitration dispute with SOCAR. Azerbaijan’s President Ilham Aliyev and SOCAR, the largest private investor in Turkey, have close ties to Erdogan. The Turkish leader allegedly used to have close business ties with Gurbanoglu, documented in detail by the investigative journalists collective The Black Sea.

There are several theories as to why Gurbanoglu is being held. One is that it’s meant to pressure him to drop the case against SOCAR. Another is that he’s being shaken down for Turkey’s increasingly cash-strapped economy.

By retaining Dershowitz, Gurbanoglu may as a last resort be hoping to leverage his connections to Trump, who ostensibly would intervene with Erdogan on the businessman’s behalf. Gurbanoglu attended Trump’s inauguration and was the first customer when Trump Towers opened in Istanbul in 2009, snapping up eight apartments, according to The Black Sea.

Asked whether his work would include lobbying, Dershowitz said in a text message, “I will of course register if I do anything requiring registration,” and “At the moment I simply helped recommend the European legal team.”

Muzin told Al-Monitor in a text message that he is “working for him as a lawyer” and is “not doing any work in the US.” Muzin said he is doing “no advocacy work at this time” and “if that changes, I would register.”

Either way, as Trump himself discovered when he was seeking the release of North Carolina pastor Andrew Brunson, also held on dubious Gulen-linked charges, Erdogan is a tough nut. It took a volley of threatening tweets coupled with sanctions for him to crack and free Brunson after nearly two years of detention.

Diplomatic pressure and the European Court of Human Rights, whose rulings are binding for Turkey, have failed to sway Ankara in many high-profile cases, notably those of journalist Ahmet Altan and philanthropist Osman Kavala. The pair have been rotting in prison on a cocktail of improbable terrorism charges with new ones fabricated to keep them there, rights groups say.

It will not have helped that Omnia Strategy cited The Stockholm Center for Freedom as a source for Turkey’s bad behavior in its press release. The group is run by exiled journalists who are overtly sympathetic to Gulen.