Turkey enjoys PR win with coronavirus aid shipment to US

Turkey ships face masks and other personal protective equipment to the United States and evacuates a Turkish COVID-19 patient from Sweden. 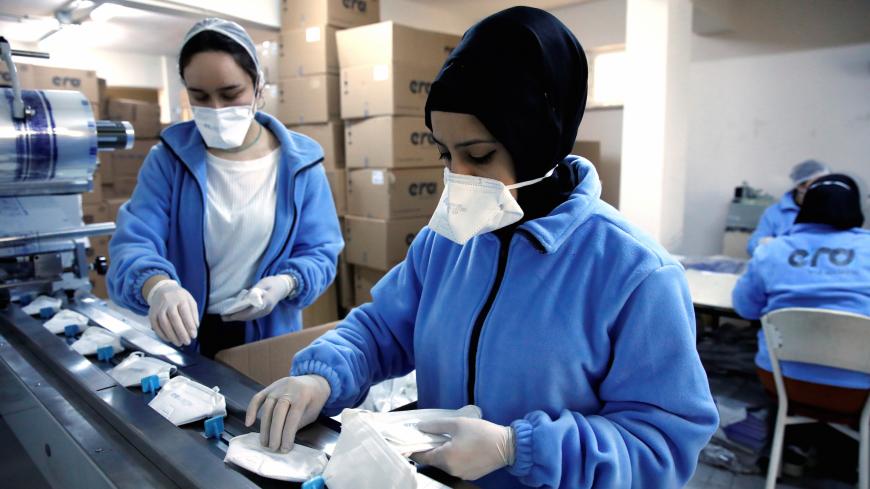 Workers produce face masks as the demand for their production rapidly increased amid struggles to meet orders, at a Turkish manufacturer's facility in Istanbul, Turkey, Jan. 30, 2020. - REUTERS/Umit Bektas

It's a rare moment when something positive happens between Turkey and the United States. It took the COVID-19 outbreak for it to materialize. “Wheels up! We are deeply grateful” the US Embassy in Turkey exclaimed on its official Twitter account. It was referring to Ankara's widely trumpeted donation of a planeload of masks, gowns and face shields — among other items — to help the pandemic-stricken United States contain the outbreak of the novel coronavirus. The supplies were scheduled for delivery today via a Turkish air force cargo plane that took off for Andrews Airbase near Washington.

“As this delivery indicates, the US-Turkey relationship is strong and one of our most important alliances,” said Washington's man in Ankara, David Satterfield, in a written statement. “NATO solidarity during this pandemic highlights the strength of our Transatlantic bond. A very big thank you people of Turkey,” tweeted Kay Bailey Hutchinson, the US ambassador to NATO.

As US diplomats milked the moment, Turks basked in their own magnanimity. “Who would have imagined a United States that awaits an aid flight from Turkey. What days we are living through,” tweeted Hilal Kaplan, a prominent columnist for the pro-government daily Sabah.

“Turkey, under the leadership of our president, Recep Tayyip Erdogan, while caring for our citizens is extending the hand of help to the needy and the oppressed in the four corners of the world,”  presidential spokesman Ibrahim Kalin said on his feed.

Turkey has sent medical shipments to 55 countries, including several rich Western nations such as Britain, Spain, Italy and Ireland, boosting the country’s sense of national pride at a time when it is grappling with the virus, and more critically for Erdogan, with a sagging economy.

“Sending aid to the United States and the UK reinforces Ankara's narrative that the global balance of power is shifting and Turkey is, if nothing else, handling the crisis better than most Western powers,” said Nicholas Danforth, a historian and a senior visiting fellow at the German Marshall Fund, a think tank. “Turkish government media has been eager to paint the situation in America and Europe in apocalyptic terms. And indeed the response of many Western countries has been just bad enough that it may provide political cover for the many failures of Ankara's own policies,” Danforth told Al-Monitor in emailed comments.

Danforth cautioned, however, “Of course as the United States learned in Turkey over the course of the Cold War providing high profile aid doesn't always win you the the undying gratitude from a country you think it should.”

To be sure, few believe that a planeload of aid will fix Turkish-US relations. The two countries remain at odds over a raft of issues, notably the Pentagon’s ongoing alliance with Syrian Kurdish militants Turkey calls terrorists.

Turkey’s purchase of Russian S-400 missiles drove Washington mad, prompting it to halt deliveries of hundreds of state-of-the-art F-35 fighter jets to Turkey and the US Congress to spew out a torrent of sanctions-laced bills targeting Ankara.

The immediate crisis was staved off when Turkey postponed activating the Russian system this month and parked the missiles in a warehouse. The conventional wisdom is that it did so to head off potentially crippling US sanctions and more immediately to help grease its request for Turkey’s Central Bank to be included in swap lines extended by the US Treasury to other emerging economies.

Turkey is desperate to boost its slumping lira and dwindling foreign currency reserves to roll over debt amid dire predictions of ballooning inflation, unemployment and negative growth this year, as in many countries hit by the pandemic. Turkey may in fact be even more vulnerable than most emerging markets to external shocks.

According to official figures released today, 92 people were reported to have died from the coronavirus in Turkey in the previous 24 hours, with 2,392 new cases registered. The total death toll from the disease stood at 5,018. The government says the curve is beginning to flatten, with the numbers of patients recovering outpacing new cases. It is mulling reopening some businesses in May after a protracted lockdown. But there are persistent reports that government figures do not reflect the true picture.

Boasting of its largesse to a world superpower helps distract public attention from these claims.

In a further display of its heft, Turkey on Sunday medically evacuated one of its citizens from Sweden. The man reportedly tested positive for the novel coronavirus but was denied treatment by Swedish doctors, his daughters claimed via Twitter. “A daughter did something that would be an example to all. Our country took very swift action. Our air ambulance brought the patient from Sweden,” Turkish Health Minister Fahrettin Koca wrote on Twitter. Critics remarked that such altruism was not on offer for the hundreds of journalists and other prisoners of conscience faced with the risk of contracting the virus. The Swedish media took a similarly cynical line, calling the move a publicity stunt.

Paul T. Levin, director of the Stockholm University Institute for Turkish Studies, took a more generous view. “I find it hard to blame the Turkish government for capitalizing on an easy PR win, especially when it involved a citizen in need who was very publicly pleading for help.”

Levin told Al-Monitor, “Let’s not dismiss the family’s very real concerns or those of the Turkish community here in Sweden, many of whom live with older family members and are concerned about the laissez faire Swedish approach to the pandemic.”

Editor's note: April 29, 2020. This article has been updated since its initial publication.