Israel’s Cabinet banned visits to military cemeteries on Memorial Day and imposed a curfew on Arab towns for the month of Ramadan. 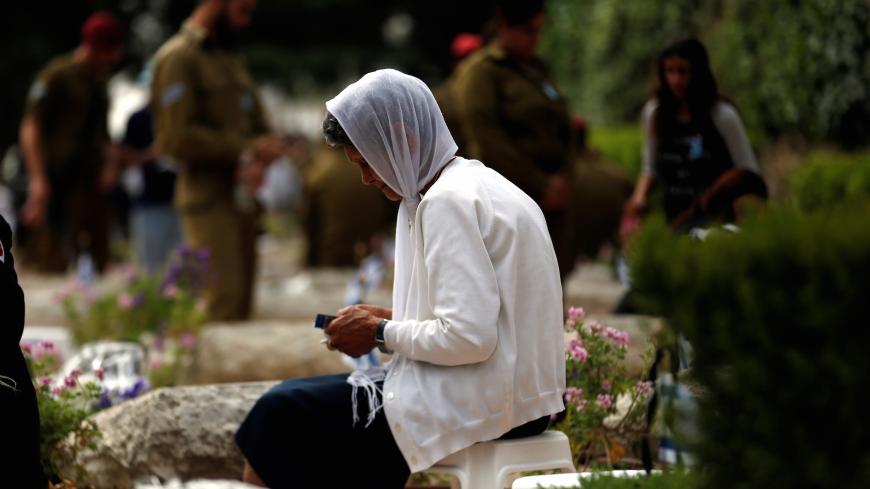 An Israeli woman reads a holy book as she sits next to a grave during the Memorial Day for the Israeli fallen soldiers in the Military cemetery in Mount Herzl in Jerusalem May 1, 2017. - REUTERS/Ronen Zvulun

With the number of coronavirus infections on the rise, Israel’s Cabinet approved today a series of restrictions concerning upcoming Memorial Day, Independence Day and Ramadan celebrations.

As of April 23, to coincide with the beginning of Ramadan, all stores in towns with majority Muslim populations will be closed to the public from evening until dawn, to discourage people from congregating for festive iftar dinners. Deliveries of food will continue, and pharmacies are allowed to stay open.

On April 28, or Memorial Day, visits to military cemeteries and memorial sites are banned. Intercity travel will be prohibited, except for those authorized to work outside the home and for shopping in permitted stores. On Independence Day, April 29, Israel will enter a nationwide lockdown, requiring people to remain within 100 meters of their homes.

On April 18, after the Passover holiday ended, Prime Minister Benjamin Netanyahu announced the easing of some restrictions, with the intent of slowly resuming economic activities and opening shops and businesses. Schools for children with special needs were to reopen, and prayer in small groups of up to 19 people outside could resume.

Though the government took its time to make decisions regarding next week’s holidays, Israelis knew that these new April 22 restrictions were in the offing. Authorities would not repeat the mistake of the Purim festival March 10, when festivities, especially within ultra-Orthodox communities, generated sharp spikes in the number of coronavirus cases.

Israeli-Arab leadership welcomed the government's lockdown decisions, which were made after consultations with health experts, security bodies and representatives of the Arab public. Last week, muezzins called on residents to pray at home and stay away from the mosques, with Arab doctors on Arabic-speaking media promoting social distancing, even during Ramadan, when families traditionally celebrate together.

However, the Memorial Day decision was met with considerable criticism from bereaved families. Ahead of today’s Cabinet meeting, members of bereaved families had pleaded with the government to allow them to visit their loved ones’ graves, as is tradition on Memorial Day.

Defense Minister Naftali Bennett said after the meeting that the bereaved families would be allowed to visit military cemeteries ahead of Memorial Day, to avoid a mass gathering on the day itself, stating, "It’s a painful decision, but it’s necessary." A flag, wreath and memorial candle will be placed on the graves of the fallen by Defense Ministry representatives, and the public is encouraged to light memorial candles at home.

On Independence Day, Israelis will have to forgo the traditional public concerts, street dancing and barbecues. Instead of forests and parks, this year's picnics will be held in backyards and on balconies.