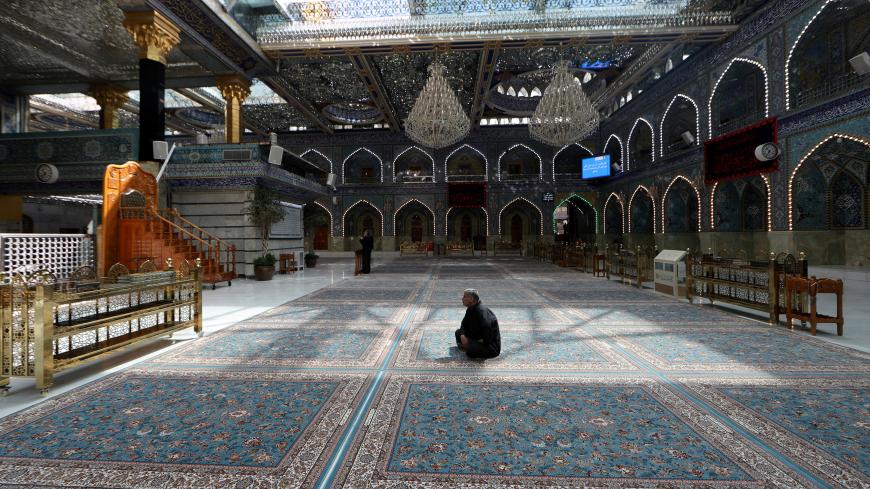 A man sits inside the empty Imam Abbas shrine, as Friday prayers were suspended following the spread of the coronavirus, Karbala, Iraq, March 20, 2020. - REUTERS/Abdullah Dhiaa al-Deen

The spread of the coronavirus in Iraq has modified Iraqi customs and traditions that show personal affection through physical touch. This is in addition to the banning of social gatherings of Iraqis in celebration of joyful events or even for condolences.

Greetings between Iraqis involve three kisses on each cheek as an expression of affection or longing, but this practice is no longer acceptable with the pandemic.

Many Iraqis are now practicing social distancing even with their dearest ones, fearing transmission of the coronavirus. Men no longer kiss each other's cheeks and women no longer hug each other, essentially ending timeless traditions, even if only temporarily.

Iraqi authorities enforced strict measures on March 13 because of the growing number of coronavirus cases. They also banned religious gatherings and visits, funeral services and wedding parties. But some Iraqis are not sticking to these measures.

Jasseb Latif, director of the Ministry of Health’s department in the Karkh district in Baghdad, reported that a person infected with the coronavirus had organized a banquet for about 80 people to celebrate his return from Iran.

Latif doubts authorities can track the 80 people who attended the banquet and were in close contact with the infected person. He urged people to isolate themselves when returning from travel.

Until the end of February, Iraqi authorities permitted funeral and wedding celebrations. Some tribes, however, decided to prevent kisses and handshakes and ordered those attending the celebrations to keep a safe distance between each other.

In Iraqi culture, especially in the central and southern provinces, the families of a deceased person would set up tents to receive people paying their condolences. Arab coffee and two meals are usually served during these funeral celebrations. Dozens of those attending the funeral procession would drink from the same cup without washing it.

But the tribes, who enjoy wide social influence, banned this tradition. Disposable plastic cups were used, and some tribes even refrained from serving coffee.

Meanwhile, some Iraqis find it shameful not to hold a funeral celebration for their deceased loved ones. “This is degrading to the deceased and his or her family," said Hamza Yahya, whose grandfather died in Baghdad at the end of March.

Security authorities in Shula in Baghdad's Karkh district did not allow Yahya's family to set up condolence tents on the corner of the street. The family received mourners inside their house, where they placed spaced chairs and cleaned and sterilized the doors. Mourners were only served bottled water.

Yahya told Al-Monitor, “It was sad. My grandfather was a very well-known man, but not many people attended his funeral because of the curfew. Only the neighbors showed up. But people‘s health is more important. We do not want the funeral of my grandfather to turn into an epicenter for the pandemic. We only served the mourners water and tried to sterilize everything.“

The burial of the dead is an honorable ritual in Iraq. Several Iraqi proverbs stress the sanctity of burying the dead. Iraqis often repeat an Arab proverb affirming that no deceased person should be left unburied. But the spread of the coronavirus seems to be putting an end to this well-entrenched ritual.

The families of persons who died of the coronavirus are baffled and do not know what to do with the bodies of their loved ones. Cemetery workers refuse to receive the bodies, fearing they will transmit the virus to them. Add to this, residents of the homes adjacent to the cemeteries also refuse the burial of any person who died of the virus.

The Health Ministry and Grand Ayatollah Ali al-Sistani of Iraq had to intervene to allow the families of the deceased to find places and ways to bury their dead.

Just like funerals, weddings in Iraq are attended by a large number of well-wishers, and parties are mainly held on the streets or in wedding halls. Iraqis often have bands playing loud, rhythmic folk music at these parties, but since the end of February, this music has rarely been heard.

Ammar al-Kaabi, who lives in Talbiyah, east of Baghdad, chose the date of April 10 to celebrate his wedding. But he told all his friends and acquaintances he had invited earlier that the wedding was canceled until further notice.

"I wished the circumstances were better to be able to hold my wedding celebration, but the danger of the coronavirus has become serious. I do not want to hold a celebration in an atmosphere of fear," Kaabi said.

Since March 22, security forces have tightened the curfew imposed on residents and imposed sanctions on those breaking it, sometimes confiscating vehicles or motorbikes.

But in one case, these same forces helped a couple from Diwaniyah province who wanted to marry despite the prevailing circumstances. They allowed them to drive their decorated car through the streets, all the way to the hotel where they spent their wedding night.

Kaabi refused to hold his wedding under these circumstances. "I want everyone to be present,“ he said, adding, "My wedding celebration after the coronavirus will be a big party because I will be celebrating my wedding and salvation from the coronavirus at the same time. I will be kissing everyone.“

In southern Iraq, many tribal elders and leaders suspended their council meetings. Others who held their council meetings set forth measures aimed at preventing the spread of the coronavirus, including obligating visitors to wear masks and preventing handshaking and kissing. They also banned anyone who feels sick from attending meetings or making contact with other tribe members.

While the pandemic has modified many Iraqi traditions and rituals, everyone still appears ready to immediately resume these traditions once the coronavirus is defeated. On April 13, Iraq registered 76 deaths and 1,352 confirmed cases of COVID-19.