After Trump tweet, Iran warns US about action in Iraq 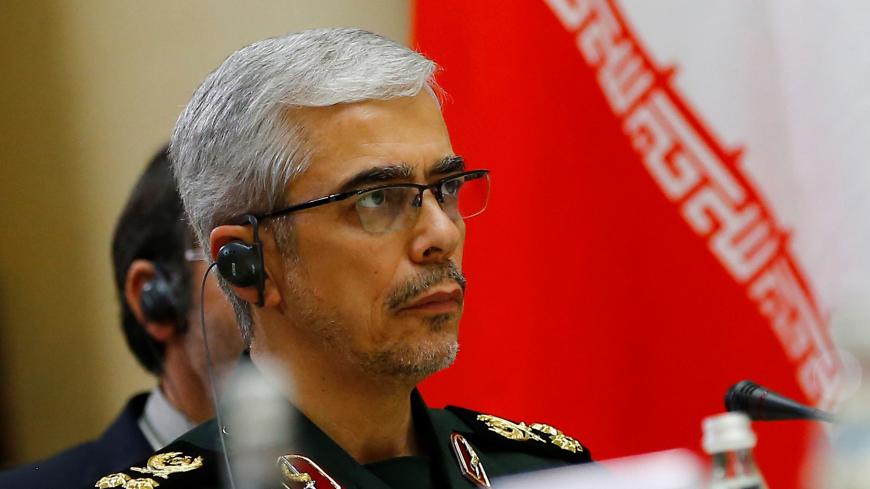 Iranian commanders have warned the United States about taking military action inside Iraq after the president tweeted about Iran on April 1. “Upon information and belief, Iran or its proxies are planning a sneak attack on US troops and/or assets in Iraq. If this happens, Iran will pay a very heavy price, indeed!” Trump tweeted.

Maj. Gen. Mohammad Bagheri, the chief of staff of Iran’s armed forces, said that it was the United States that has been involved in troop movements in the Middle East. “In the last few days American provocations and actions in Iraq and the Persian Gulf have increased,” Bagheri said at a news conference April 2. He added that the United States has been creating a media storm with accusations but that it has “intentions against resistance groups and the Popular Mobilization Units.”

Bagheri added that Iran has been monitoring US troop activities in the region and that all of the Islamic Republic's defense forces are on alert. Referencing the rocket strikes on US bases in Iraq, Bagheri said, “The events that have taken place in the last few weeks on American bases in Iraq is a natural reaction of the people of Iraq and resistance groups in response to the assassination of Qasem Soleimani and Abu Mahdi al-Muhandis and has no connection to us.” Soleimani was an Iranian general and Muhandis a leader of the Popular Mobilization Units in Iraq.

Bagheri continued, “The Americans are well aware that the people of Iraq and the people of the region are opposed to their military presence in these countries.” He warned that the United States would face “the most severe response” if it were to take any action against Iran.

The United States moved out of three bases in Iraq in March in what it called an effort to consolidate its troops. It recently left the base in Kirkuk that was attacked by Iranian-backed forces in late December, killing an American contractor. This attack was the catalyst for an escalatory spiral that led to the US killing of Soleimani in Baghdad on Jan. 3 and which continues.

Mohammad al-Tabataei, deputy secretary-general for Asaib Ahl al-Haq, an Iraqi group with close ties to Iran, celebrated what he referred to as the “US exit from its bases.” In an interview with an Iraqi newspaper, which was translated by Iranian media, Tabataei said there will be “news of more victories” in Lebanon, Bahrain and Yemen.

Maj. Gen. Yayha Rahim Safavi, a military adviser to Iranian Supreme Leader Ayatollah Ali Khamenei and a former commander of the Islamic Revolutionary Guard Corps, also weighed in on what is going on in Iraq. In a statement published by Iranian media April 1, Safavi said the United States needs to clarify its position on international law given that the Iraqi parliament passed a bill in January requesting that US troops leave Iraq. He said, “The era of decline of American political and security power in the world and West Asia is here and the American military knows it is not in its interest to take action.”

Safavi also wrote, “I recommend that American politicians and military commanders think about their responsibility and the consequences of taking provocative actions.”