An engineer from the Gaza Strip is making much-needed medical equipment via 3D printing technology. 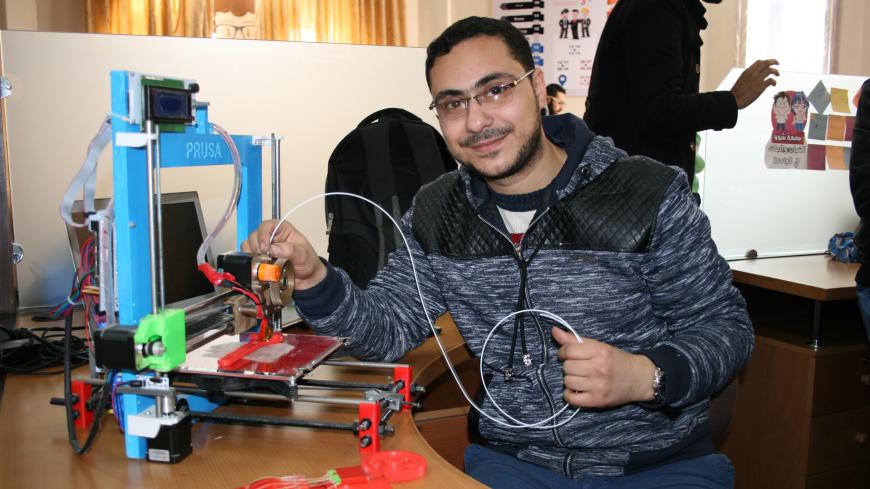 GAZA CITY, Gaza Strip — While the entire world fights the spread of the novel coronavirus, some pioneering, creative ideas are emerging to support these efforts.

In the Gaza Strip, engineer Mohammed Abu Matar and his team at Tashkeel 3D are using 3D printing technology to produce medical equipment needed to confront the pandemic.

Abu Matar, a specialist in digital manufacturing and 3D printing, told Al-Monitor, “As the pandemic spread, we couldn't stand idly by, so we initiated a search for creative ideas that support efforts to fight the coronavirus because that's our social responsibility.”

He added, “We searched within the open source communities on social media where ideas are exchanged on ways to fight the coronavirus, and we focused on those that can be applied in the Gaza Strip based on our available resources.”

The team has produced several different types of equipment, including the protective respirator face masks that front-line medical workers wear, which it is selling for about $6 apiece. The firm is also producing devices that allow two patients to use one ventilator.

Abu Matar’s company, which he co-founded in 2016, works in cooperation with the Ministry of Health in Gaza to provide it with the equipment.

The Gaza Strip, which has more than 2 million inhabitants, recorded 13 cases of the coronavirus as of April 8 — the same day the Ministry of Health announced coronavirus test kits have “completely” run out. The announcement has raised fears that the deteriorating health and economic situation in Gaza will turn into a serious health disaster should the virus spread. The health sector is also suffering from a shortage of protective personal equipment for medical personnel.

On March 31, Al Mezan Center for Human Rights said the number of respirators needed for patients suffering from the virus that causes COVID-19 is proof of the tragic situation in the Gaza Strip. There were only 96 respirators in Gaza intensive care units, despite the dense population packed into its 140 square miles.

Meanwhile, The Guardian cited Abdelnasser Soboh, director of the World Health Organization’s Gaza office, as saying March 22 that the Gaza Strip needs 100 additional ventilators in the event of an outbreak.

Abu Matar noted that 3D printing can be used to fill gaps in the health sector, but he stressed that it is not an easy task and warned against random printing in the medical field. The effort requires precision and scientific construction, and the supervision of specialist doctors and equipment experts to guarantee accuracy and effectiveness, he said. Abu Matar also emphasized that the printing process must be conducted in cooperation with the Gaza Health Ministry.

Meanwhile, 3D printing technology is still relatively new to Gaza and is taking some time to expand. Abu Matar created his first printer in 2015, and also designed a machine to produce the plastic filament the printer needs, since the Israeli blockade makes it difficult to obtain materials and parts.

He was able to produce a tourniquet, as many people believe that the majority of deaths during the wars on the Gaza Strip were caused by severe bleeding, and that many people could have been saved had the bleeding been stopped.

Abu Matar's company produced a large number of such dressings for ambulance and emergency crews to use in Gaza, and he believes they helped many of the people injured in the marches of return, which began in March 2018 on the Gaza borders.

However, Abu Matar and his team members face great hurdles that make their work harder, and sometimes even impossible. He explained that obtaining designs and building the required systems are major challenges, especially with the lack of raw materials due to the Israeli blockade and the coronavirus lockdown, which force them to search for alternatives to these materials locally.