Turkey's president, after meeting with EU leaders, says Greece should open its border with Turkey to migrants and then let them cross into other European countries; Russian and Turkish patrols for a new security corridor straddling Syria's M4 highway also are set. 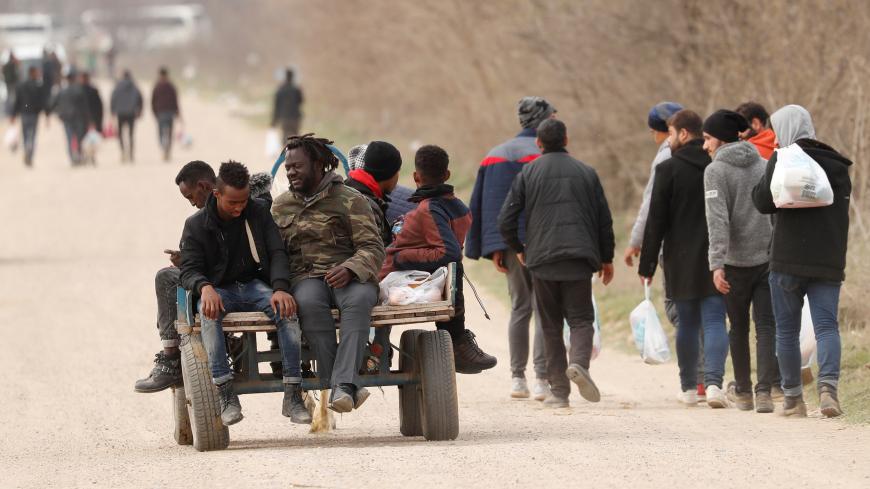 Following a round of tense negotiations with European leaders, Turkish President Recep Tayyip Erdogan said today that he will not prevent migrants and refugees from trying to cross Turkey’s border into Greece.

“We are not thinking of closing these gates. Our proposal to Greece is to open the gates. These people won’t stay in Greece. Let them cross from Greece into other European countries,” Erdogan told reporters.

After Erdogan’s meeting with European Union leaders in Brussels ended in deadlock today, he announced plans to host the leaders of France and Germany for a new round of talks in Istanbul next week. Turkish Foreign Minister Cavusoglu added that Ankara was prepared to reach a deal with the EU before the bloc’s next summit March 26.

"If we are to come up with a road map with the EU, we expect them to be sincere," Cavusoglu told the state-run Anadolu news agency.

In late February, Erdogan announced he was “opening the doors” to Europe and would allow refugees to stream across Turkey's border with Greece, a European Union member state. Fearing a repeat of the 2015 refugee crisis in Europe, the EU leaders have slammed Turkey’s decision.

In 2016, Turkey agreed to prevent refugees from crossing into Europe in exchange for 6 billion euros (nearly $6.8 billion) to be spent on the new arrivals Turkey was hosting. Ankara says it has not received all the funding, and that other promises, including visa-free travel for Turkish citizens, have not been met.

"It is not only about keeping migrants in return for more money," said Cavusoglu.

Turkey, which already hosts more than 3.5 million Syrian refugees, fears the latest outbreak of violence in neighboring Syria will spill across its borders.

Since December, the regime and its Russian allies have been conducting an offensive to retake Idlib province, the last major swath of the country still in the hands of the opposition after nine years of war. In the past three months, nearly a million people — the overwhelming majority of them women and children — have been displaced by the fighting, according to the United Nations.

Turkey has stepped up its military presence in the northwestern enclave, and in recent weeks has inched closer to a direct confrontation with Russia. The two countries back rival sides, with Moscow helping Syrian President Bashar al-Assad and Turkey supporting some rebel groups fighting the Syrian regime.

On Thursday, Ankara and Moscow agreed with Russia to a cease-fire deal in Idlib that would involve joint Turkish-Russian patrols and a new security corridor that would straddle the M4 highway.

A Russian military delegation arrived in Ankara today to hash out details of the new accord. Beginning Sunday, Turkey will patrol the northern part of the corridor and Russian forces will patrol the south.