Coronavirus in Syria: a catastrophe in the making

The Syrian government has stepped up measures to tackle the spreading novel coronavirus amid growing fears among Syrians of the pandemic’s catastrophic spread in light of their harsh living and humanitarian situation. 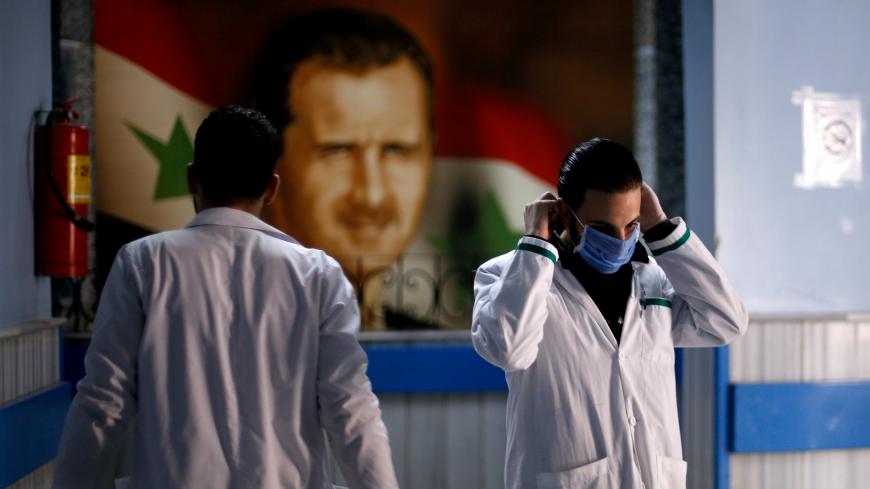 A health worker with a face mask walks inside a hospital, as hospitals enforce a series of measures to prevent the spread of the novel coronavirus, Damascus, Syria, March 19, 2020. - REUTERS/Omar Sanadiki

ALEPPO — The Syrian people fear a sudden spike of the novel coronavirus in the areas controlled by the government of President Bashar al-Assad. With these concerns, the government had already initiated precautionary measures in anticipation of any potential outbreak.

On March 20, the government team dealing with the coronavirus in the areas controlled by the Syrian regime conducted a comprehensive evaluation and review of the precautionary measures that had been taken. The team called on Syrian citizens to adhere to the voluntary quarantine procedures; otherwise, the state would be forced to impose obligatory quarantine.

On March 23, Minister of Health in the Syrian government Dr. Nizar Yazigi announced Syria's first coronavirus infection. According to Yazigi's statement to state TV, the infected is a 20-year-old girl coming from abroad. Apparently she had no symptoms upon her arrival in Syria but was isolated anyway due to her travels, indicating that the necessary measures were taken to deal with the case. The total number of recorded cases is Syria as of March 26 are five.

This is the first official Syrian recognition of the presence of the coronavirus, and on March 23, the government stepped up procedures for the supposed response to the epidemic by carrying out campaigns to sterilize cities and villages and controlling commodity prices in Syrian markets. Yazigi inspected on March 23 a quarantine ward designated by the General Authority of the National Hospital of Hama for any possible infections with the coronavirus. So far, no new cases of infection have been announced in Syria other than that announced by the Minister of Health.

The Syrian government has already made many decisions and taken measures in anticipation of any outbreak of the pandemic within the ministries, service institutions and facilities in the provinces. It closed restaurants, cafes, parks, gyms, sports clubs, internet cafes and tourist facilities. It suspended conferences and launched sterilization and cleaning campaigns at the official departments, in public transportation, and in neighborhoods and cities in the Syrian provinces. Authorities also banned the movement of travelers. Mobile ambulance clinics were allocated along with isolation rooms in university hospitals for suspected cases. Several public departments closed in the provinces. On March 19, the Syrian People's Assembly announced the postponement of its sessions.

On March 18, the Recruitment Directorate affiliated with the Syria regime forces announced the suspension of the issuance of driver's licenses and military service completion attestations until April 22.

On March 13, the government ordered the closure of universities, schools and institutions from March 14 to April 2.

The Ministry of Endowments on March 14 announced the suspension of Friday prayers and group prayers for two weeks. On March 20, the Ministry of Religious Endowments decided to close all directorates and divisions from March 22 to April 2.

Despite the government measures taken in record time, fears are increasing among the Syrian people. The prices of disinfectants, masks and cleaning materials soared as the supply of such materials became scarce due to the increasing demand. Also, the price of some necessary food commodities also increased in light of the rising demand.

The regime's measures and decisions do not seem as ideal as it wants them to sound.

Social media activists on March 18 shared videos, including one of a quarantine center on the outskirts of Damascus, showing dirty rooms packed with beds. Other photos show that the ministry had improved the conditions of the center.

For its part, the Health Ministry posted March 19 photos of Syrian students it said were coming from China who are being quarantined for 14 days.

Another photo also went viral on social media showing a person lying on the ground in Damascus, allegedly infected with the virus; the Health Ministry subsequently denied this.

In another incident, the manager of the Aleppo University Hospital refuted on March 20 the rumor that two physicians in the hospital were infected by the coronavirus.

Yahya Mayo, media coordinator of the Syrian National Army of the Free Syrian Army, told Al-Monitor, “In light of the regime’s security and military grip, no international organization or body can obtain real information about [cases of infections]. The opposition has obtained information from several Syrian regions and provinces confirming the existence of positive cases. The largest number of cases is recorded in Deir ez-Zor, Damascus, Aleppo and Latakia, which are the areas where Iranian militias are heavily deployed.”

News and rumors abound among Syrians in the areas controlled by Assad forces about coronavirus cases and even deaths. These, however, have yet to be officially declared by the government and remain unconfirmed news.

A local source in Damascus confirmed to Al-Monitor on condition of anonymity that a state of panic haunts Syrians in the capital. “People fear the outbreak of the pandemic in light of pro-forma measures. There is unprecedented secrecy about diagnosed cases, which are many and constantly increasing. Cases of coronavirus infection are being diagnosed as pneumonia.”

On March 18, the Committee for Detainees and Missing Persons affiliated with the Syrian High Negotiations Committee appealed to the international community to provide the appropriate conditions to protect Syrian detainees in the regime's prisons from being infected with the coronavirus.

In a statement on its website on March 16, Human Rights Watch (HRW) warned of the impact of the spread of the coronavirus on detainees in Syria. HRW noted that the detainees are denied “adequate food, medical care, sanitation supplies, ventilation and space.” It further noted that if the pandemic spreads, the situation of these detainees “could be catastrophic.”

Al-Monitor met Nour al-Khatib, who is in charge of the detainees section at the Syrian Network for Human Rights. She said fear from the spread of the coronavirus in detention camps is well-founded. “Adra central prison management has suspended family visits. But what about the security branches where the risk is greater? The cells are a very favorable environment for the spread of all infectious germs, viruses and parasites,” said Khatib. The Assad regime has a large number of detention centers and prisons, the vast majority of which are classified and run by political security, military security, air force intelligence and other branches.

Khatib added, “The possibility of the infection of the security branches officers and members with the virus is extremely high given the presence of the Iranian, Lebanese and Iraqi militias who constantly move between their coronavirus-hit countries and Syria.” 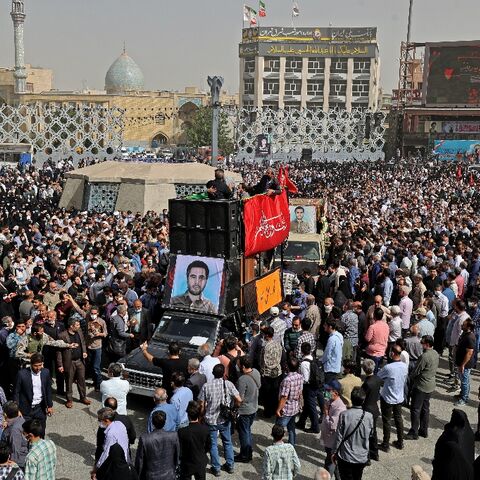