Egypt's young but ambitious space agency is accepting applications from cititzens who would receive training to go into space as the first Egyptian by 2026. 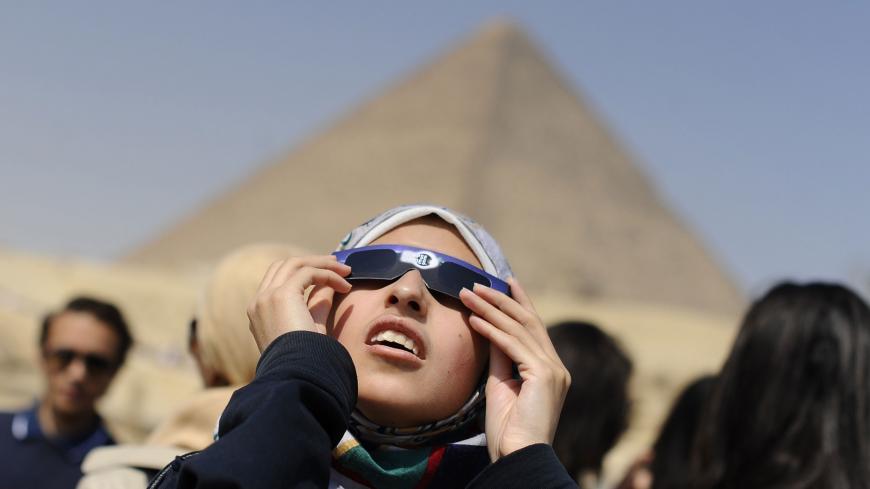 People use protective glasses to catch a glimpse of a solar eclipse in front of the Pyramids of Giza and the Sphinx in Giza, Egypt, March 20, 2015. - Mohamed Hossam/Anadolu Agency/Getty Images

Are you a healthy, educated Egyptian over 35 years of age who speaks English and wants to learn Russian? If so, and you are willing to spend the next six years in a training program, the Egyptian Space Agency (EGSA) invites you to become one of the first Egyptians in space.

By next year, an unspecified number of Egyptians will be selected to receive space training, after which one man or one woman will be chosen to duty aboard the International Space Station (ISS).

Sending an Egyptian into space is part of Egypt’s 10-year National Space Program that was announced by Mohamed Elkoosy, CEO of the newly founded EGSA, on March 6. The program, which is divided into three stages, targets the development of space missions and upgrading of the Egyptian industry facilities. “We also plan to have good international relations and a solid base for standardization,” Elkoosy told local media.

In December, the agency announced that both men and women are eligible to apply for the program and that applicants would be taking psychological, physical and mental tests during the first stage. During the three-year second stage, contestants will be trained to go into space, while in the third and final stage, they would be trained to adapt to living in space at the ISS.

Elkoosy told Al-Monitor that the applicants would be taught Russian in addition to English. “Sources in space science are either in English or Russian and those who are selected would have to deal with Russian-speaking astronauts,” he said, adding that the training also includes two years at a center located either in Russia or the United States to learn space science.

Alaa al-Nahri, vice president of the UN Regional Center for Space Science and Technology Education for Western Asia (RCSSTEWA), told Al-Monitor that all citizens can apply for the competition, “but people with scientific experience would have an advantage.”

He pointed out that the selected Egyptian citizens will spend 10-15 days in space and that the first Egyptian astronaut will be ready in 2025-26.

After years of delays, EGSA was set up in accordance with Law No. 3 of 2018, establishing it as a public body that reports to the president of the republic and enjoys technical, financial and administrative independence. Its mission includes cooperation with other countries to share experiences in the field of space technology.

Elkoosy said that EGSA held several meetings with the United Arab Emirates Space Agency to benefit from its experience, as the agency has already sent one of its citizens, Hazza al-Mansouri, who was part of an eight-day space flight aboard the Soyuz MS-15 in September 2019. He was accompanied by two astronauts — Russian Oleg Skripochka and American Jessica Meir. More than 4,000 Emiratis had applied to the Emirati astronauts' program in 2017 to become the UAE's first astronaut.

Mansouri is the third Arab citizen to go into space. He was preceded by Saudi Prince Sultan bin Salman bin Abdulaziz Al Saud and Muhammad Faris, a Syrian military aviator, in the 1980s.

Elkoosy stated that the agency is cooperating with the US space agency NASA, as well as Egyptian scientist Farouk El-Baz, who is known as the “Egyptian behind the moon landings,” to benefit from his expertise.

The International Astronomical Union, an association of global astronomers, named in September 2019 an asteroid after Baz for his role of choosing the landing sites of the Apollo program and his leading the training of the astronauts.

Magda Nasr, a member of the Education and Scientific Research Committee in the House of Representatives, told Al-Monitor that Egypt currently lags behind in the field of space science, especially compared to other Arab countries, but it now aims to keep pace with the developments that it has missed out on over the past decades. The committee is urging Egyptian universities to establish space science departments, she said.

Once the Egyptian program makes progress, the country intends to assist other African countries in their space programs, Elkoosy said. EGSA had signed a cooperation agreement with Ghana, Uganda, Nigeria, Sudan and Kenya in a bid to launch the African Development Satellite Initiative to monitor climate changes in Egypt and these five countries.

The country will also host the African Space Agency, a new permanent body that will be established in the next two years.