How an Iranian director defied ‘repression’ and won Golden Bear

The Golden Bear-winning Iranian movie “There Is No Evil” revolves around the power to say no, the very same concept that has characterized the filmmaker’s overall mission. 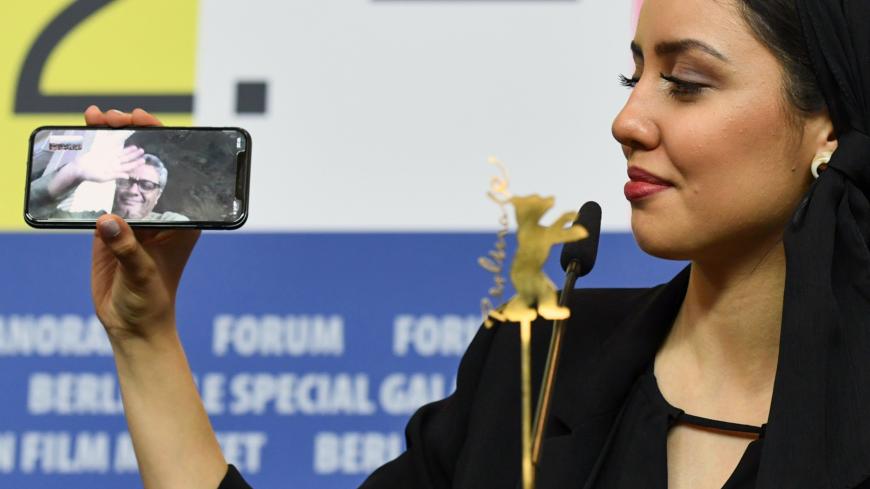 Director Mohammad Rasoulof, winner of the Golden Bear for Best Film for "There Is No Evil," speaks through a video call as his daughter Baran Rasoulof holds a cellphone, during a news conference after the awards ceremony of the 70th Berlinale International Film Festival, Berlin, Germany, Feb. 29, 2020. - REUTERS/Annegret Hilse

Art and entertainment
Courts and the law
March 8, 2020

This year’s 70th Berlin International Film Festival was yet another moment for spotlights to be turned on Iran, where outspoken directors continue to battle censorship and near-crippling bans under restrictive ideological regulations imposed by the Islamic Republic.

Mohammad Rasoulof grabbed the Golden Bear in the main competition section of the 70th Berlin International Film Festival Feb. 28 for his drama “There Is No Evil." Due to a travel ban placed on him at home, Rasoulof was unable to show up at the event, where his daughter, Baran — starring in the same movie — held on to the prestigious trophy before delivering her brief and emotional speech in praise of her father.

In the course of four apparently disconnected episodes, each with a distinct title, the film portrays four plausible characters, who at some point have to face a critical moment of decision-making and take their stance toward Iran’s death penalty laws, a personal choice between submission and disobedience, one that draws a line between those who choose to side with a repressive system and those who pay the price by refusing to do so. In his attempt to lay bare the irrationality of the controversial laws on capital punishment, Rasoulof’s latest movie is by far the most outspoken film, in which he does not shy away from explicitly questioning the powerful ruling establishment.

Rasoulof’s 150-minute drama that premiered in Berlin comes within a continuum of his past portfolio, marked by his defiance against state restrictions, an open example being his 2013 “Manuscripts Don’t Burn” that dares to touch upon the most sensitive security issues in Iran.

While the award presented during the grandiose ceremony was Iran’s best cinematic win in the past three years, Rasoulof received no public message of congratulation from the Iranian officials. Instead, the Iranian judiciary summoned Rasoulof to inform him about starting his one-year term in prison, a verdict he was handed last July.

On the other end of the spectrum, there were messages of strong support for the director and fury at the system that has been pressuring Rasoulof. Internationally acclaimed filmmaker Jafar Panahi, who is suffering similar bans on attending international festivals to receive his awards, described Rasoulof’s achievement as “heartening” news and “a disappointment to those in power, as they cannot enslave Iranian art and artists.”

The 47-year-old Rasoulof began his cinematic career as an assistant director in 1999, standing next to prominent filmmaker Rasoul Sadr-Ameli, as the latter directed “The Girl in Sneakers," a box office success on women’s freedoms in Iran. Since then, Rasoulof has never stopped being a thorn in the side of the Islamic Republic’s supervisory bodies. In “There Is No Evil,” Rasoulof seems to be depicting the same personal defiance and clarifying his view on responsible art, telling his audience that for genuine change, sacrifices have to be made. And he has paid the price in his own career. The verdict he received in 2019 has also barred him from “any activity or membership in social and political groups” for two years. Rasoulof says during interrogation sessions he was grilled specifically over three of his movies: “So Long!,” “Manuscripts Don’t Burn” and “A Man of Integrity." All the three infringe upon themes that Iranian authorities consider red lines.

In the run-up to the Berlin film festival, the House of Cinema, a nongovernmental organization representing Iranian actors and filmmakers, urged the country’s Chief Justice Ibrahim Raisi to issue a furlough facilitating Rasoulof’s presence in the festival. The demand was rejected by the hard-line cleric.

Even before the debut in the German capital, the Association of Iranian Directors sought a permit for the public screening of the movie at home. The request, which has a slim chance of approval, has been met with a harsh response from the influential hard-line camp. Unsurprisingly, the ultraconservative paper Vatan Emrooz attacked the association “for backing an individual (Rasoulof) who is banned [from working] under the law” and expressed concern that such pushes will leave behind a bad precedent.

“The Iranian censorship machine is bound to purge any thought that could enlighten the audience about who they are,” Rasoulof said in an interview with the Persian-language opposition news outlet Iran Wire. “Never become part of the chain of authoritarianism. Your power is the power to say no.” That’s the movie’s theme in a nutshell, which Rasoulof has borrowed from the Czech dramatist Vaclav Havel. According to Rasoulof, his award-winning film leaves his audience with the same choices his characters have to make to define their boundaries with the “despotic establishment.”