Yemen's Houthis are using newer and deadlier drone models that discharge explosives and shrapnel, according to a report. 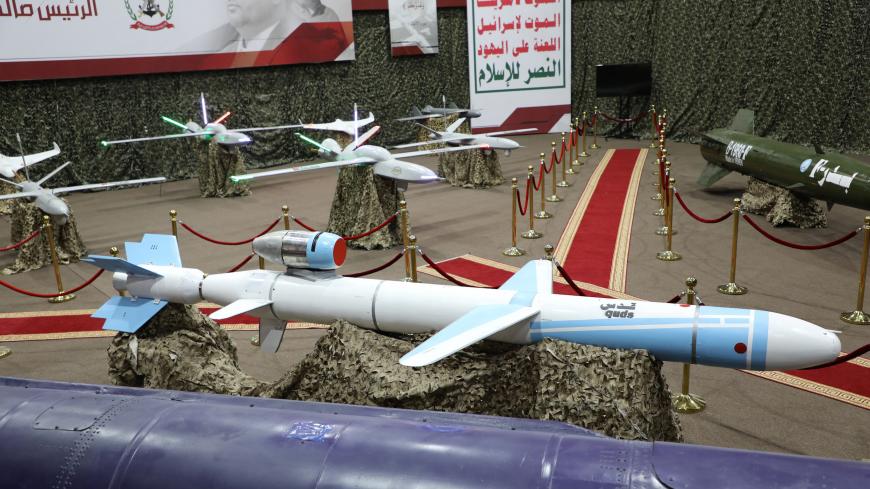 Drones used by Iran-backed Houthi rebels in Yemen are becoming deadlier and more accurate over long ranges, according to a report released Wednesday.

While the Yemeni group had been using earlier variants of Iran-linked drones in kamikaze-style attacks that sought to smash directly into targets, newer models discharge explosives and shrapnel, such as in an attack on a Yemeni military parade in al-Anad last year that killed six people and wounded several more.

“It’s not just an evolution in their technology, but their ability to reach targets beyond the conflict,” said Jonah Leff, the director of operations at Conflict Armament Research, known by the acronym CAR, which analyzed nine drones seized from the battlefield by the United Arab Emirates.

The CAR report states that the parts used in drones are “identical or similar” to improvised explosive devices found in Yemen and Bahrain.

As the Donald Trump administration has backed off of earlier claims of direct linkages between the Houthi movement, which practices a blend of Zaydi Shiite Islam, and Iran, Leff, the CAR expert, said it’s increasingly “likely” the rebel fighters have the ability to develop their own parts.

But experts say it’s not clear that the Iranians are ready to offload their best technology on the rebels, even as experts said last year the Houthis were running low on components such as engines, fuel tanks and internal computing for unmanned aircraft, preventing deployment of more sophisticated models.

It is “highly doubtful Iran would give Houthis latest-generation technology,” said Fernando Carvajal, a former member of the UN Panel of Experts who reviewed the CAR report. “This would give [Saudi Arabia] and the US access to Iranian technology since Houthi drones tend to crash” over the border, risking the possibility that it could end up in American or Saudi hands, he said.

But even as Houthi-produced airframes — while there’s no evidence that they are fabricated in large factories like the Islamic State's improvised explosive devices in Iraq and Syria — have extended the Iran-backed group’s range deeper into Saudi Arabia for use against Patriot missile defense batteries, most of the models shot down have been linked to surveillance, not weaponized.

Carvajal said the drones are used to disrupt the Saudi-led coalition and assassinate high-level Houthi opponents. “I don’t see their drones affecting battles anywhere so far,” he added. Houthis assassinated two major officers in 2019, one from the Yemeni army and another from the Security Belt Forces of the Southern Transitional Council.

What’s more, Carvajal said, the Houthis have “no way” to test and produce drones inside Yemen. A lack of computer capability and operational security would limit such activity, he said. “So far, we can say the embargo is working,” he said. “The shipments are being intercepted, [and there are] no new developments in Houthi strategy or tactics.”

Last week, the US Navy seized a cache of Iran-made weapons on a dhow bound for Yemen, including suspected drone components. US Central Command said the systems were identical to advanced weapons captured in a November seizure of an Iranian dhow by the USS Forrest Sherman, an American guided missile destroyer.

Yet the UN and other countries trying to stop drones from getting into the hands of the Houthi rebels face an uphill battle. The UN suspects that the Houthis rely on complex shipping and land routes to get the drones in country, including an overland route via smugglers through Oman.

“It’s very difficult because these are dual-use items. Their argument in many cases is that they’re not conducting any wrongdoing, even in areas where there might be risk,” said Leff.

The UN Panel of Experts, which advises the Security Council on the possible implementation of sanctions, has indicated that the Iranians likely procure parts for the drones from within Europe. The expert grouping also identified a shipment from Hong Kong into Oman last year.

Meanwhile, as the network of proliferation has continued to spread, the Pentagon is looking to develop new defensive weapons to protect US troops in the field from weaponized unmanned aircraft.

In January, the US Army began standing up a counter-drone office designed to curb the proliferation of unmanned vehicles, part of a broader Pentagon effort to spend $373 million by the end of the fiscal year in September.

Ellen Lord, the Pentagon’s top weapons buyer, told reporters last month that the agency is looking at a number of different systems to defeat drones.