Can Ankara’s sudden change of heart on NATO save the day in Idlib?

Ankara’s abrupt U-turn to reembrace NATO appears driven by conjunctural necessity to balance Russia in Idlib and Libya rather than a new realization of structural dependency between Turkey and NATO. 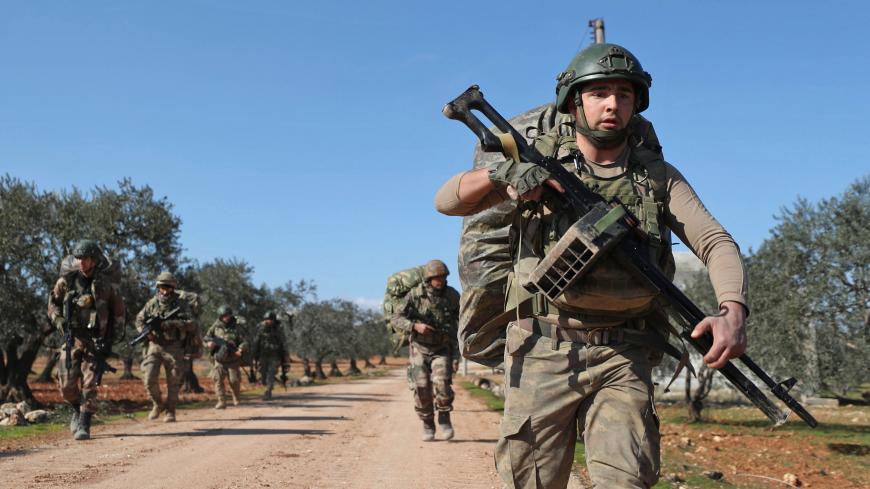 Turkish soldiers deploy at a position near the village of al-Nayrab, about 14 kilometers (9 miles) southeast of the city of Idlib in northwestern Syria, Feb. 20, 2020. - OMAR HAJ KADOUR/AFP via Getty Images

On Feb. 18, Turkey marked the 68th anniversary of its NATO membership with enthusiastic messages of commitment to the alliance and a series of laudatory events, which could have drawn little attention were they not in sharp contrast to the dismissive atmosphere of last year’s anniversary.

Neither Ankara nor the media seemed to care about the 67th anniversary of the country’s NATO membership last year. The occasion was passed over with a mundane statement by the Foreign Ministry, while the year 2019 in general was abuzz with debates, mostly in the pro-government media, on whether Turkey should leave the alliance.

Indeed, a long list of issues marred Turkey-NATO relations in 2019, including:

In light of all those tensions, Turkey’s pro-government media came to depict NATO as a top security threat. NATO became a hate object, accused of myriad misdeeds, from having a hand in orchestrating the coup attempt to plotting to divide Turkey.

On this year’s anniversary, however, things looked diametrically different. Ankara and the pro-government media seemed to have rediscovered NATO. The anniversary was celebrated with high-pitched gatherings, conferences and a government-backed social media campaign under the motto “Turkey is NATO, we are NATO,” which became a top trending topic on Twitter. In short, last year’s prevailing discourse that portrayed NATO as a shackle that keeps Turkey from acting independently to advance its national interests gave way to a narrative about NATO being an anchor bonding Turkey to the Western security bloc.

And what aroused this NATO fervor in a country where arguing in favor of NATO required much courage around this time last year? What happened in a couple of months to make Ankara remember NATO’s importance as a security partner?

NATO itself did nothing special to win Ankara’s affection. Yet, Turkey’s relationship with Russia nosedived into a fresh chapter of chill as tensions shot up in Syria’s rebel-held province of Idlib and Russia’s position in Libya shifted from impartial mediation to favoring Gen. Khalifa Hifter, the adversary of the Turkey-backed Tripoli government. As a result, Turkey and Russia have come to the brink of a military faceoff akin to the crisis of November 2015, when Turkey shot down a Russian jet at the border with Syria.

A quick survey of the pro-government media’s coverage of Idlib and Libya would reveal a fast U-turn in sentiment since the Russian-brokered meeting between the Turkish and Syrian intelligence chiefs in Moscow on Jan. 13, when the Turkish-Russian partnership apparently began to crack.

Yet, judging by both Ankara’s rhetoric on the importance of the Western security bloc and the publications of media outlets and think tanks close to the government, Ankara’s outreach to NATO is a result of Turkey’s predicament in Idlib and its need to counterbalance Russia rather than a sign of a structural, long-term reorientation.

For instance, in an article titled “NATO’s support of Turkey,” a member of SETA, a staunchly pro-government think tank, asks the following questions: “Can Turkey rely on NATO against Russia, [Syrian President Bashar al-] Assad and Iran in the problem it is experiencing in Idlib? Is NATO supposed to give Turkey practical support against those actors in Idlib? What does the Idlib crisis mean for NATO and its members?” The author then proceeds to a cautiously optimistic conclusion on NATO backing.

And does Ankara’s abrupt U-turn stem from conjunctural necessity or a new realization of its structural dependency on NATO?

The outlook suggests the change of heart is driven entirely by the dead ends that Turkey has hit in Idlib and Libya. To extricate itself from those dead ends, Turkey is attempting to counterbalance Russia and shift its bilateral relationship with Russia, which has spiraled out of balance and become a one-sided dependency, to a multilateral ground.

Ankara is obviously trying to draw NATO, the United States and European heavyweights into greater involvement in Idlib to readjust the balance, while Assad's forces are expected to forge ahead until they assert control over the strategic M4 highway.

And is NATO capable of deterring Russia in Idlib at all?

Recalling the case of Ukraine might be enough to answer the question. Looking like “a giant that cannot bite” in the Ukraine crisis, NATO appears unlikely to take the risk of armed confrontation with Russia over Idlib, which it sees as an out-of-area conflict and outside the scope of the NATO treaty’s Article 5 on collective defense. The most tangible sign of NATO’s reluctance on Syria is its foot-dragging on taking some operational responsibilities in the fight against the Islamic State in the 2014-2019 period.

NATO is likely to swiftly return to its hate-object status in Turkey if NATO fails to meet Ankara’s request for urgent assistance. Ankara is in constant need for enemies — real or imaginary — to be able to sell to the Turkish public its rapid U-turns in its foreign policy and the consequences of its political and strategic miscalculations. NATO tops the nominee list of outside foes because it remains a “common enemy” on which pro-government quarters and the still influential anti-Western and Euroasianist lobbies in Ankara can agree and cooperate.