Two Tunisian chefs are marrying art with gastronomy in a fresh look at the country's culinary and artistic heritage. 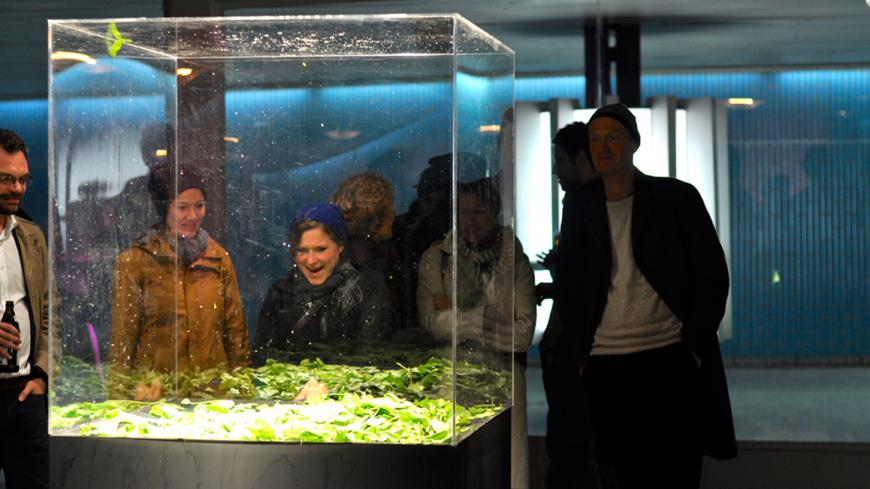 A glass cube filled with hundreds of spinach leaves stands on a black wooden pedestal for artist Rafram Chaddada's installation "Pkeila" which was exhibited at Maximilian Forum, Munich in 2015. - Rafram Chaddad/

Tunisia’s art scene has gained momentum since the fall of President Zine El Abidine Ben Ali in January 2011 but its restaurant and food culture has not kept pace. However, behind closed doors in supper clubs and even private art salons, a new and exciting interpretation of Tunisian cuisine is beginning to emerge.

The old Medina quarter of Tunis is the epicenter of an artistic and cultural movement that has blossomed since the revolution of 2011. It is home to a number of public festivals such as Dream City, a multidisciplinary contemporary art event that has grown over the past seven years and inspired other festivals, such as the art biennial Interference.

At Medina's southern edge in an old stone house is the atelier of Sabri Ben Mlouka, Tunisia’s best-known fine art nude photographer. A grand gate and a candlelit passageway lead to a large black-walled salon that opens onto a modernist garden. His works in progress hang on the walls, graceful nudes photographed surreptitiously in Catholic cathedrals, private rooms or roadsides in front of grazing sheep. One disarmingly intimate photo is of a 70-year-old woman in a bath, lost in thought.

Ben Mlouka eschews public galleries in favor of private exhibitions. He told Al-Monitor, “The work is very intimate, so during the course of the private viewing, I want my guests to enjoy this feeling of intimacy. I don’t seek publicity or public promotion; I prefer to keep things discreet.”

“There’s a lot of hypocrisy here [in Tunisia],” he went on. “People [here] are sensitive to eroticism and fetishism but are too afraid to talk about it publicly. I seek to push the limits of taboos. The women [who pose for me] want to push their own limits.”

At the small, private events, select guests drinks Tunisia’s finest wines and feast upon the experimental cuisine of chef Malek Labidi. Ben Mlouka and Malek Labidi met by chance in 2018 and the photographer became the chef’s collaborator and muse.

Labidi returned to Tunis to open La Bo’M in 2011 after studying in France and working for the great chef Alain Ducasse in Paris. In 2015, she sold her restaurant and started a daily culinary show on Tunisia’s Nessma TV. She was invited to judge Arabic TV cooking competitions.

Labidi told Al-Monitor, “When I met Sabri, he told me that I would have no budget restrictions, as I would be preparing a meal for just a handful of people who were used to [eating at] top restaurants. So it was a great opportunity. It is the only place that I do my own cuisine because they are not customers.”

The planning starts a few weeks before a new exhibition, with Ben Mlouka sharing his photos with Labidi. “It is a very close collaboration between us — often I am the first to look at his photography,” Labidi said. They create a menu inspired by what will be exhibited. “He shows me the photos and says something like, ‘I want something hot, spicy or something black.’”

“It always starts with an amuse-bouche,” she explained, followed by a dinner of seven or eight small plates made from seasonal, locally sourced produce. “Maybe some foie gras with date and mint,” she told Al-Monitor, explaining that she likes to tease and surprise the guests. “When somebody eats my food, I want them to reflect a bit on what they have eaten, and slowly realize what the flavors and ingredients are in a dish.”

A Tunisian of Jewish origin who returned to his homeland in 2015, Rafram runs cultural tours around Jewish Tunis and the Ghriba synagogue on the Island of Djerba during the pilgrimage of Lag BaOmer every year. He not only encourages Jews to reconnect with the land they left but Tunisians and other Arabs to embrace their common history.

Born in Djerba in 1976, Rafram emigrated to Israel with his parents when he was three. He said he returned to Tunisia in 2015 to concentrate on his passions for art, culture and gastronomy. “[I thought I was] basically moving to a better place for me — a place that would make my life easier. But my move to Tunis became a political statement because of the Jewish-Muslim conflict,” he told Al-Monitor.

“There are 200 Jews in Tunis and 1,500 in total in Tunisia," he pointed out, adding that the Israeli government has been striving to destroy the Jewish heritage in Arab countries for its own political ends. "They are making a lot of efforts to destroy a 2,700-year-old community,” he said.

In Tunis, he is known for his monthly gastronomic events at Dar Ben Gacem, one of Medina’s emerging luxury boutique hotels. Rafram takes guests on culinary explorations through dishes and accompanying talks.

“During the dinner, I present the history of the recipes the customers have just eaten and the local customs," he explained.

He includes food in his other art, such as an installation titled "Pkeila" which had been displayed at Maximilian Forum, Munich in 2015. Raw spinach flutters in a glass box in a wink to the slow-cooked spinach-based stew that is part of Tunisia’s Jewish cuisine.

Another of his works, “Fish Smuggler," is an X-ray image of fish inside a suitcase. “This is called the ‘Fish Smuggler’ because I always take fish to my mother [in Jerusalem]. I freeze them and put them in my suitcase,” he said with a laugh. “She asks me for many things, not only fish. Fish is the strangest of her requests."

He compared the fish to his family's story, saying, "Fish have neither nationality nor a country."

For Rafram, food is one of the many battlegrounds of the Israeli-Arab-Jewish conflict. “Israel appropriates Arab Jewish food. It is occupied food, strange and weird as it sounds," he said.