What a Russian-Turkish compromise on Idlib may look like

Although a new round of Russia-Turkey talks on Idlib failed, there are still ways to settle the conflict. 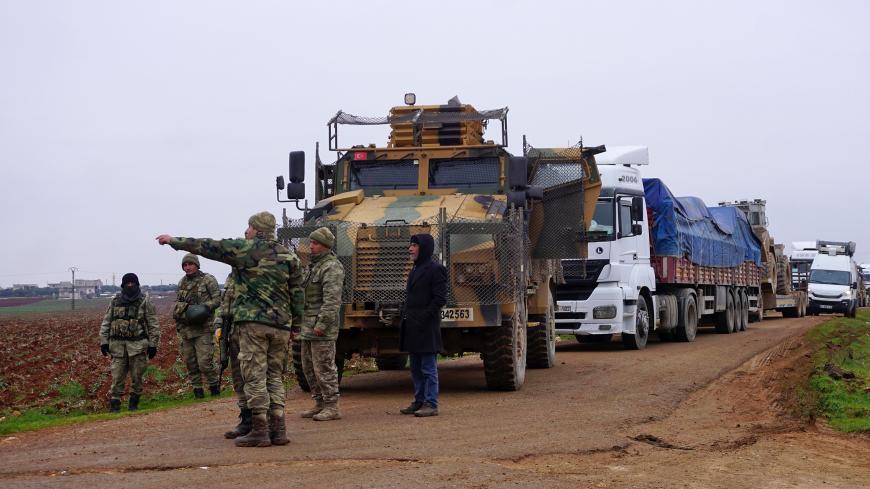 Turkish military vehicles are pictured in the town of Binnish in Syria's northwestern province of Idlib, near the Syria-Turkey border, Feb. 12, 2020. - (Muhammad Haj Kadour/AFP via Getty Images)

“A detailed discussion of the situation ‘on the ground’ in Syria continued, with an emphasis on the Idlib de-escalation zone," the Russian Foreign Ministry said in a statement. "Both sides noted their adherence to the existing agreements that envisage measures to reduce tensions, ease the humanitarian situation and continue the fight against terrorism.”

The negotiating parties also stressed “the importance of promoting the political process of resolving the Syria crisis led and implemented by the Syrians themselves in accordance with UN Security Council Resolution 2254,” according to the statement.

According to Turkish presidential spokesman Ibrahim Kalin, Ankara is not satisfied with the outcome of negotiations.

​“We did not accept the map [of de-escalation zone borders] proposed by Russia," Kalin said. "Our goals are not oil or capturing territory. We only want to protect civilians and achieve stability in the region. The waves of refugees are gradually putting pressure on Turkey.”

A source from the Syrian opposition told Al-Monitor that Russian proposals implied Turkish control of a strip of the Idlib de-escalation zone, 15 kilometers (9 miles) wide, along the Syrian-Turkish border, where Syrian refugee camps could be located. Currently, Turkish troops are positioned 20-35 kilometers from the border. The proposals also suggested deployment of Russian checkpoints between the Turkish-controlled part of the Idlib de-escalation zone and the areas of Operation Olive Branch in Afrin. Finally, the deal proposed that the M4 and M5 routes be open for traffic under joint Russian-Turkish control.

Turkey rejected the plan and insists on the complete withdrawal of Syrian forces from the Idlib de-escalation zone.

“We insist on the implementation of the Sochi memorandum on the Idlib de-escalation zone and withdrawal of the Syrian army outside the area," said Kalin. "It is about the borders that were outlined 2.5 years ago. Our observation points were placed in accordance with them, and we are not going to change this.”

Despite the absence of any visible progress in the Russian-Turkish talks, there is seeming improvement in the background for relations between the two countries. Joint Russian-Turkish patrols resumed in the Syrian northeast Feb. 17. In addition, it is likely that the countries are coordinating tactical steps in Idlib. This may apply to both the Turkish military deployment and the areas of military operations of the Bashar al-Assad regime forces.

In between the settlements of Taftanaz and Ariha, the most dense deployment of Turkish troops blocks the Syrian army's advancement to Idlib. Yet, until recently, the routes in the Aleppo region and in the direction of the city of Atarib were open to the Syrian army. The military operations there led to the return of Assad's control over the Aleppo suburbs.

After completing operations in the Aleppo suburbs and creating a security zone near the M5 highway, the Syrian army might advance to recapture the M4 highway, which links Aleppo and Latakia. The Turkish troops have so far left a window to allow Assad to launch an unhindered attack there. When the Syrian regime regains full control over both the M4 and M5 highways passing through Idlib, another freeze of the situation in the de-escalation zone may follow.

In the meantime, any possible new agreement on Idlib is likely to be temporary and fragile. It will also likely be based on the 2018 Sochi memorandum, which, despite its irrelevance to the actual situation, both parties continue to insist on the necessity of its implementation. Thus Turkey's refusal to give up on its demand for Assad's forces to withdraw from the de-escalation zone. Yet Turkey will not apparently make any efforts toward the memorandum's practical implementation.

Russia, in turn, is unlikely to agree to grant — albeit unofficially — the status of “Turkish security zone" to Idlib territories not yet captured by Assad. Such an informal status has already been given to the areas where the Turkish army conducted its operations Euphrates Shield, Olive Branch and Peace Spring.

At the same time, there are doubts that the Turkish forces deployed in Idlib are ready to provide an actual counteroffensive. Their current deployment is seen as a demonstration of force with no real willingness to use it and without a well-considered plan.

Thus, an attempt by the Syrian army to launch an offensive in the cities of Idlib and Taftanaz, where the concentration of Turkish troops is highest, might be seen as a moment of truth. If the regime’s forces can squeeze between Turkish positions without an actual Turkish counteroffensive, they could advance right up to the Turkish border, establish full control over the Idlib de-escalation zone and block all Turkish bases.

Yet such a scenario would be a serious defeat for Erdogan before his voter base, and therefore it is unlikely he will allow this to happen.

It's unlikely, though, that the Syrian army would be able to block and evade Turkish troops, which are estimated at 7,000-9,000 in Idlib.

If Turkish troops effectively counteract Assad’s offensives, Ankara will force the Syrian regime to stop its operations in Idlib. All other Syrian offensives would be similarly blocked. Then the separation of spheres of influence in Idlib would become real, along the line of contact between the Syrian and Turkish armies. After this de facto demarcation, an agreement could be reached, taking into account the new reality developed in the de-escalation zone. Everything depends on Turkey’s stance and its readiness for tough actions, not its statements.

In any case, Moscow and Ankara do not seek to sever ties and are likely to continue to seek solutions to the Idlib equation. Even Turkey’s harsh demand for Syrian troops to withdraw behind the line established by the Sochi memorandum does not entail the return of opposition forces to these areas, or for these areas to be transferred to Hayat Tahrir al-Sham. For instance, the areas taken by Assad in Idlib can be controlled by the Russian military police and the pro-Russian 5th Corps, which includes the 8th Brigade made up of “reconciled” fighters of the Syrian opposition. This would cause less of a counteroffensive from the Turkish side. In other words, there’s still room for a viable compromise for the parties to embrace.