The US administration shot down the idea that it will send troops back into Syria amid assurances from the secretary of state that the United States is "working" with Turkey on the "complicated" situation. 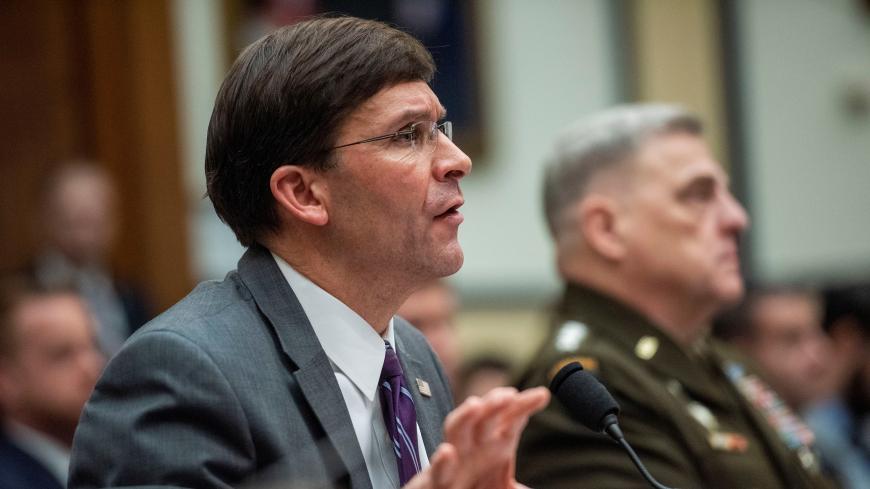 Syrian President Bashar al-Assad’s efforts to reconsolidate the area that the State Department says has led more than a million people to take off for the Turkish border has led to American and United Nations calls for a cease-fire.

But Esper, who oversaw the removal of US troops from northern Syria in October amid a Turkish incursion into Kurdish-held areas, said the limited American mission of 600 troops remains focused on defeating the remnants of the Islamic State.

“There has not been that discussion about reengaging in the civil war,” the Pentagon chief said under questioning from Florida Republican Rep. Matt Gaetz, a Trump ally, at a House Armed Services Committee hearing on Wednesday. “At this point in time, I don’t see any likelihood that we would be back along the border.”

“Obviously the situation has become a lot more complicated in Idlib province right now given the confluence of many actors,” Esper added. Secretary of State Mike Pompeo said Tuesday that the United States was “working” with Turkey to deal with the tensions, but did not provide specifics.

Turkey has asked the United States for Patriot missile coverage to defend against a possible Syrian or Russian barrage along the border. On Wednesday, Turkish President Recep Tayyip Erdogan told reporters he had learned that the United States did not have any of the batteries to give, but said he planned to raise the issue again with Trump.

The Pentagon has already deployed three Patriot systems to Saudi Arabia since the Trump administration suspected Iran targeted oil installations in a September missile attack, but officials insist that Riyadh has already paid $500 million to offset US costs.

Typically, Turkey would have to notify the Defense Department of its interest in purchasing or borrowing the system through a letter, but even a formal request could face challenges. Defense Department officials are still mulling the potential of deploying Patriots to Iraq after an Iranian ballistic missile attack in January left 112 US troops with mild traumatic brain injuries, though Esper said today that more than 70% of those service members have returned to duty.

Earlier this month, the Pentagon announced a $200 million request for the upcoming year to support vetted Syrian opposition fighters taking on IS, including the Syrian Democratic Forces. That’s $100 million less than last year’s request, following an appropriations reduction of the same amount.

“The FY 2021 budget planning process began as early as June 2019, when the Combined Joint Task Force-Operation Inherent Resolve identified needs and requirements to accomplish its mission to ensure a lasting defeat to [IS],” said Chris Sherwood, a Pentagon spokesman. “For Syria, these requirements included a request for … funds to train and equip the [vetted Syrian opposition] totaling $200 million.”