The Russian side is said to be developing two strategies to thwart Turkey’s possible objections to cultural autonomy for Syrian Kurds. 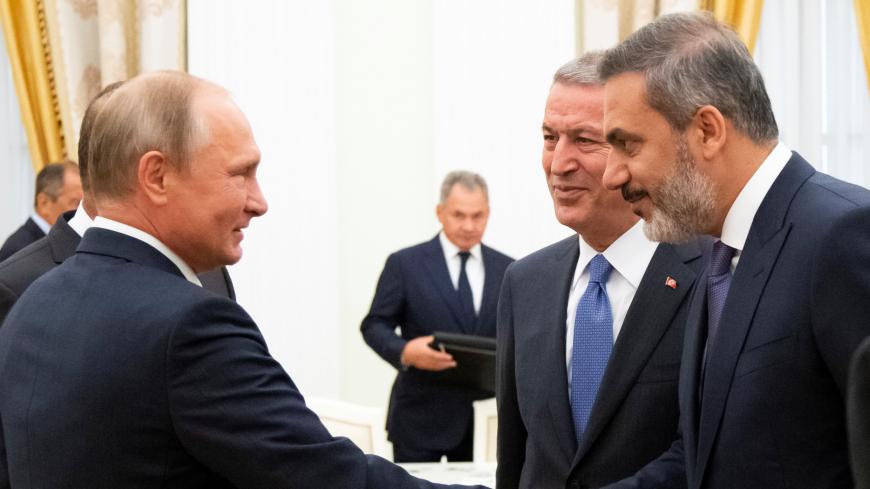 A possible Russian-brokered reconciliation between Ankara and Damascus could change the course of Syrian’s nearly 9-year-old civil war amid the unprecedented level of clashes in Idlib.

The last rebel stronghold not only keeps Turkey on the brink of direct confrontation with the Syrian government forces but also tests Russian-Turkish ties.

The ramped-up Russian efforts finally translated into a high-level direct dialogue between the two sides when Turkey’s intelligence chief Hakan Fidan and his Syrian counterpart Maj. Gen. Ali Mamlouk met in Moscow on Jan. 13. Despite ongoing low-profile contacts, the face-to-face encounter of the two represents the first high-level meeting between the two sides since 2011.

Aware of the fact that the Syrian crisis cannot be settled without mending bridges, Russia is pushing for restoration of ties on the basis of the 1998 Adana accord, which envisages enhanced security cooperation against terrorist organizations. The two spymasters are said to have agreed on a nine-point road map to advance the dialogue, including a goal to cooperate against terrorism, according to Turkish reports.

Sources who are familiar with the nature of the Russian-brokered contacts between Turkey and Syria told Al-Monitor that some high-level Turkish officials of Circassian origins played a facilitating role in the dialogue process. Exiled from Russia in 1864, Circassian people were scattered across the Middle East and over time they rose to positions of significance in security establishments in their respective countries.

A Turkish general of “Circassian” origin headed one of the low-level contacts between the two countries and held talks with the Syrian delegation headed by Hussam Luka, a high-ranking Syrian intelligence officer, the source told Al-Monitor.

The meeting also stood witness to a first: Fidan and Mamlouk reportedly discussed possible cooperation grounds against the Syrian Kurdish Democratic Union Party (PYD) and its armed wing, the People’s Protection Units (YPG). The YPG is a sister organization of the Kurdistan Workers Party (PKK), which Turkey — along with the United States and many other Western powers — considers a terrorist group.

The meeting grabbed the attention of global and regional powers. Their capacity as spy chiefs aside, both Mamlouk and Fidan are known as close associates to the leaders of their countries. Mamlouk participates in important political negotiations on behalf of President Bashar al-Assad while Fidan is known as one of the vital pillars of Ankara’s Syria policy.

Although the surprise meeting might be followed by further steps, the Russian ambition is not yet matched either by Ankara or by Damascus.

The Russian side says a “reset” between Turkey and the Syrian regime is a must for two reasons.

First, once the relations between Ankara and Damascus normalize, Turkey-backed armed forces would have no choice but to compromise, lessening the potential for violent conflict; Turkey would have to stop supporting the armed Syrian opposition, thwarting any possible confrontation between the Turkish army and regime forces.

Second, the normalization of political relations could help mitigate the financial problems of the Syrian economy, which is on the brink of collapse due to the war and sanctions. The economic crisis is threatening the military gains the Syrian government forces have achieved on the battlefield. Turkey’s contribution to the reconstruction efforts of the country would also be important.

However, Turkey’s support for the Syrian rebels and the Turkish military presence in the Syrian territories continue to be a deal breaker for the Damascus government.

Indeed, the first demand Mamlouk expressed during the Moscow meeting was for Turkey to respect the country’s sovereignty and withdraw its forces from Syria immediately, the Syrian state news agency SANA reported.

The Syrian source told Al-Monitor that although the situation on the ground dictates an agreement, the current positions of Turkey and the Syrian government don’t allow for reconciliation. “Russia believes that the reconstruction process in Syria will not be successful without Turkey’s involvement. The financial crisis in the country is so deep that it’s threatening the Syrian government's military achievements on the ground. Certain vital supplies can only be provided by Turkey,” the source told Al-Monitor on condition of anonymity.

“Ankara has made its position quite clear on one matter in talks with Moscow: Turkey may consider withdrawing its forces from northern Syria should Damascus agree to implement some structural changes, including limiting the regime control to the south of the safe zone and taking the YPG under its full control.”

According to the source, the nine-point road map shouldn’t be overestimated and it can only be seen as a “common ground” to launch a dialogue because Assad “may not be able to convince” his base on the legitimacy of these nine points

Furthermore, the source said Iranian forces may opt for a tactical withdrawal from their positions in the wake of Iranian Maj. Gen. Qasem Soleimani’s killing and that Turkey may attempt to fill the vacuum. “The Trump administration wouldn’t stop Turkey’s efforts to restrain and push back Iranians,” the source added.

The widespread opinion is that Turkey will not agree to withdraw its military presence from the war-torn country without ensuring a mechanism to completely eliminate the PYD and the YPG.

This leads many to wonder whether the Syrian government would sacrifice the Syrian Kurds to mend ties with Ankara. “Right now, the regime’s main concern is survival; maintaining its territorial integrity is not a priority, at least for now. They are neither ready to fight against the PYD nor do they have the capacity for that. Besides, Russia and the United States will not allow that.”

Russia deems it necessary that Kurds have at least a cultural autonomy in order to end the American military presence in Syria, particularly around oil fields under the control of Syrian Kurdish groups.

The Russian side is said to be developing two strategies to thwart Turkey’s possible objections to this idea: giving Turkey a share in the reconstruction process in Syria and establishing a cooperation bloc between Syria, Turkey and Russia to support Ankara’s policies in the energy war over hydrocarbon resources in the eastern Mediterranean.

Can mutual interests over the hydrocarbon resources in the eastern Mediterranean play a constructive role in this process? The source said that Turkey’s unilateral strategy to explore natural gas resources in the waters prevents Syria from following an independent policy and that Syria will probably develop its strategy by taking all the players into account.

“Turkey has to be strong; otherwise it cannot overcome these problems. The fire needs to be put out completely; otherwise a tiny spark could reignite the fire. Turkey has to understand this,” Ahmad told Al-Monitor. “The end of the war will bring peace to the neighboring countries as well.”

Ahmad said the Syrian government will not permit the Syrian Kurds or any other group to pursue ethnic policies once the regime regains its strength after restoring its territorial integrity and sovereignty. “The YPG can merge into the Syrian national army, but the government won’t allow the YPG to keep their flag; no one can expect such a thing,” Ahmad said.

Despite his seemingly uncompromising attitude, Turkish President Recep Tayyip Erdogan has a record of backpedaling when push comes to shove. Given the financial problems the Turkish economy faces, Erdogan may well follow his track record once again should he be given assurances that Turkey will be given a share in the Syrian reconstruction process.