Turkey's ruling party has imposed religious rules in the public sphere, a move that could have major implications for the country's future. 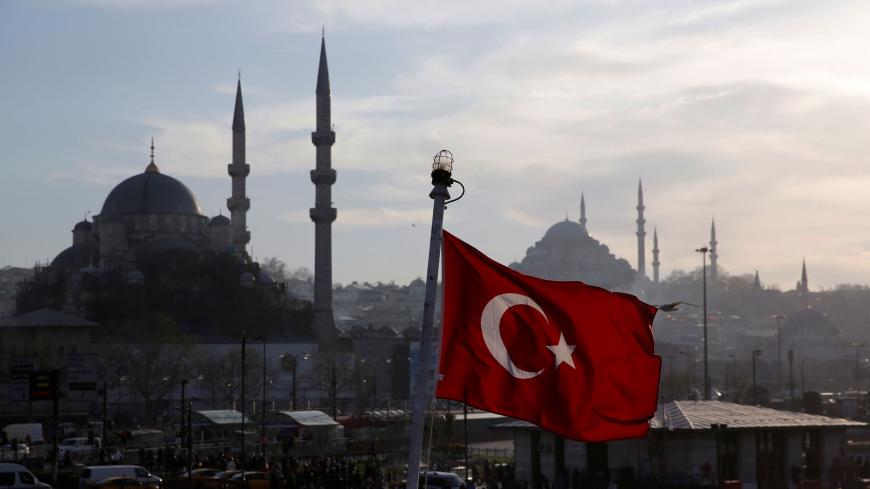 A Turkish flag, with the New and the Suleymaniye mosques in the background, flies on a passenger ferry in Istanbul, Turkey, April 11, 2019. - REUTERS/Murad Sezer

For the the first time in the modern Turkish republic, a ruling party has officially imposed religious rules in the public sphere, reigniting concerns that Turkey is gradually drifting toward an Islamic regime.

The Turkish government set out Islamic directives to regulate inspections on interest-free finance. Independent auditing firms will have to obey Islamic rules and established Islamic practices while inspecting the interest-free financial institutions, according to the country's official gazette published Dec. 14. Interest-free finance, also known as Islamic banking, is a fast-growing market in Turkey under the rule of the Justice and Development Party (AKP).

Speculation over Turkey’s drifts toward Islam is not new. Ever since the AKP came into power in 2002, there has been incessant discussion of whether Turkey would become an Islamic regime. However, according to most political scientists and observers, the Turkish experience under the leadership of President Recep Tayyip Erdogan is not unique. For them, Erdogan is yet another populist leader, not so different from Hungary’s Prime Minister Viktor Orban or President Donald Trump. They also tend to think that the regime is not unique to Turkey: It is competitive authoritarianism, where competition exists to a degree and the power of the opposition is curtailed.

​When it comes to the role of religion in Turkey, the general tendency has been in line with the above-mentioned approach: Yes, Erdogan openly expresses his wish to raise pious generations, and he doesn’t hesitate to spend state funds for this purpose. He also challenges the secularist order set by Ataturk, the founder of the modern Turkish republic.

Categorically, one cannot see the pillars of a religious state in Turkey. There is no ban on alcohol and no state-sanctioned dress code, as in Iran or Afghanistan. There is no coercion to send people to the mosques during prayer times.

​However, some of Erdogan's decisions, particularly in recent years, contrast with the above perspective. For instance, there may not be an alcohol ban, but under AKP rule alcohol has become extremely expensive. As a result, alcohol consumption is limited to certain segments of society. Also, public alcohol consumption is only possible in major cities and certain provinces of Turkey. It is no longer possible to find restaurants or pubs that serve alcohol in rural Anatolian towns and cities.

Another example is the mammoth annual budget of the Directorate of Religious Affairs, or Diyanet, Turkey’s official religious body. Its 2020 budget is bigger than the budgets of eight ministries, including ministries of interior and foreign affairs. Thanks to its enormous budget, the directorate has extended its services to kindergartens, where the Quran is taught to young pupils.

During the AKP's reign, many schools were converted into religious institutes called Imam Hatip schools. The number of students enrolled in Imam Hatip schools reached some 1.3 million in the 2017-2018 education year.

All of these developments can be seen as efforts to create a pious generation rather than efforts to impose religious rule. But a recent development refutes this optimism.

The Turkish government introduced Dec. 14 unprecedented wording and language to the Turkish public record by a ruling issued in the country’s Official Gazette. For the the first time in the modern Turkish republic, the ruling party officially imposed religious rules to regulate the service sector: inspections on interest-free finance. The ruling sets basic rules and regulations for independent auditors by referencing several Quranic verses and hadiths — the words of the Prophet Muhammad — and fiqhs — the established Islamic practices.

“An act against Islamic jurisprudence and rules cannot be considered legitimate even if it is legal and in accordance with the established practices of the market,” the ruling said.

According to the ruling, the auditors must obey “Islamic jurisprudence and rules,” in addition to the relevant national and international laws, while inspecting interest-free financial institutions.

The ruling came about a month after Erdogan’s much debated call for organizing daily life in accordance with the Islamic rules.

“Time and conditions change, but the words of the Quran do not. … We will act according to Islam, not vice versa,” Erdogan said, addressing the sixth Religious Council meeting of the Diyanet Nov. 28.

The fear that Turkey "will wake up one morning and see that Sharia rule has been imposed, as in Iran" is "unrealistic, because it is not possible for them to do so," Gultekin wrote Jan. 12 in Diken, an independent Turkish news outlet. "But there is a trend in this direction proceeding step by step."

Gultekin argued that Turkey is rapidly drifting toward Islamism. “In fact, we can say that the country has covered much distance in terms of this transition,” he wrote. According to Gultekin, the public will soon not be able to hold a dialogue on such matters because such a discussion itself will be considered anti-religious.

Indeed, recent developments confirm such a trend. Perhaps Turkey will not adopt Sharia overnight, but there are indications it could gradually drift toward a new order, where secular rules are replaced with religious ones.

Meanwhile, regardless of the religious agenda of Erdogan and his party, surveys show that efforts to create a pious generation are backfiring. A poll by the prominent Turkish firm Konda showed that the number of people who defined themselves as religious conservatives dropped to 25% from 32% between 2008-2018. In the same period, those who fast during Ramadan dropped from 77% to 66%. Also, several polls indicated that the AKP is losing its support base.

However, these impediments do not necessarily mean that Erdogan and the government will give up their agenda.