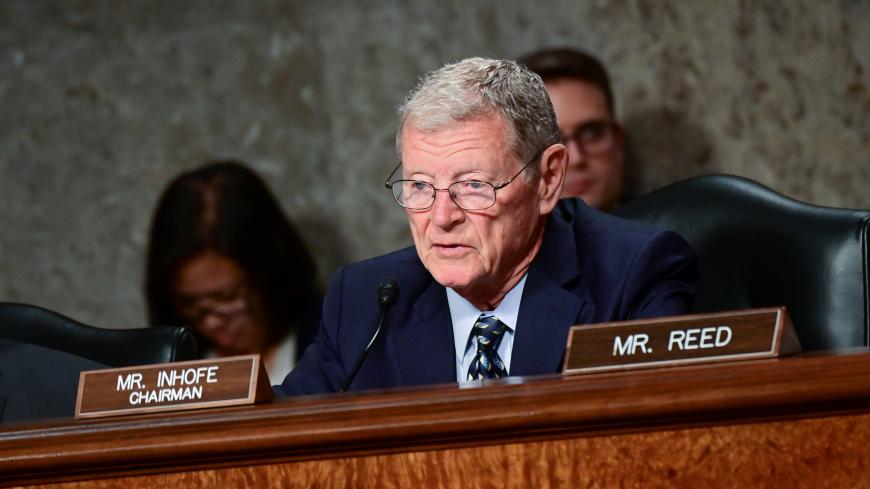 The Donald Trump administration is doubling down on its Iraq pressure campaign, threatening to impose devastating sanctions on the fragile country should Baghdad move forward with its threats to expel US forces. And the policy has buy-in from key Republican lawmakers, who are in no hurry to push back against the president’s sanctions threats.

After the Iraqi parliament approved a nonbinding resolution Jan. 5 that called on all foreign forces to leave the country in the wake of the Jan. 3 assassination of Iranian Maj. Gen. Qasem Soleimani, Trump threatened to “charge them sanctions like they’ve never seen before.” Trump threatened not to withdraw US forces — regardless of Baghdad’s wishes — until Iraq pays the United States for an “extraordinarily expensive air base that’s there.”

“We know what we want Iraq to do, and that might be a worthwhile step,” said Inhofe.

AFP reported Sunday that Trump administration officials have threatened to cut Iraq off from a $35 billion US-based account that holds Baghdad’s oil revenue, accounting for some 90% of the state budget. The United States has also repeatedly granted Iraq a sanctions waiver to import natural gas from Iran that supports its electric grid. That waiver expires next month.

Additionally, Baghdad has resumed negotiations with Moscow to purchase a missile defense system — a sale that would incur legally mandated US penalties on Iraq per a 2017 Russia sanctions bill.

Senate Foreign Relations Committee Chairman James Risch, R-Idaho, another Trump ally, initially declined to provide an opinion on the president’s sanctions threats. However, he told Al-Monitor, “We’re certainly not going to continue to provide assets to Iraq if they want our troops gone. It’s that simple, and that’s all I’ve got to say.”

Neither the White House nor the Iraqi Embassy would comment, but the State Department reaffirmed today that the Trump administration is still serious about the sanctions.

“We will consider sanctions, if we deem them necessary,” a State Department spokesperson told Al-Monitor, accusing the Iraqi parliament’s vote of putting the campaign against the Islamic State at risk.

The spokesperson noted that Secretary of State Mike Pompeo “has made it clear that there does need to be a conversation between the United States and Iraq not just regarding security, but also our financial, economic and diplomatic partnership.”

Iraq's caretaker Prime Minister Adel Abdul Mahdi has requested that Washington dispatch a delegation to discuss a US troop withdrawal — a request that the State Department rebuffed. But multiple sources familiar with Abdul Mahdi’s thinking have told Al-Monitor that he would actually prefer the United States to stay despite his public support for parliament’s resolution calling for US troops' expulsion.

“The fact that we would be punishing Iraq and jeopardizing our ability to affect future counter-[Islamic State] missions there is just so deeply irresponsible,” Sen. Chris Murphy, D-Conn., the top Democrat on the Senate’s Middle East panel, told Al-Monitor. “We knew that taking out Soleimani while he was there under Iraqi government protection would come with consequences. And you’ve got to accept the consequences of your actions, and this administration doesn’t seem to want to do that.”

The United States invaded Iraq in 2003 to topple Saddam Hussein under President George W. Bush. President Barack Obama withdrew all US troops from the country in 2011 after failing to reach an agreement with Iraqi Prime Minister Nouri al-Maliki. Obama reintroduced US troops into Iraq in 2014 to fight the Islamic State, which had taken over Mosul and other parts of the country.

Iraqi bases hosting US forces have become the focal point for attacks from Iran-backed Shiite militias in recent years, culminating in Iranian missile attacks on the bases last week in response to Trump’s Soleimani strike.

“We have handed Iran a sort of backdoor victory here,” House Armed Services Committee Chairman Adam Smith, D-Wash., who opposes sanctioning Iraq, told CNN last week. “Iran wants us out of Iraq. This makes us getting out of Iraq much more likely. This is a victory for Iran, and I think a policy mistake for those reasons.”