Successive incidents in East Jerusalem are keeping the 350,000 Palestinians on edge as there seems to be no process that can lead to fill the leadership vacuum in the city. 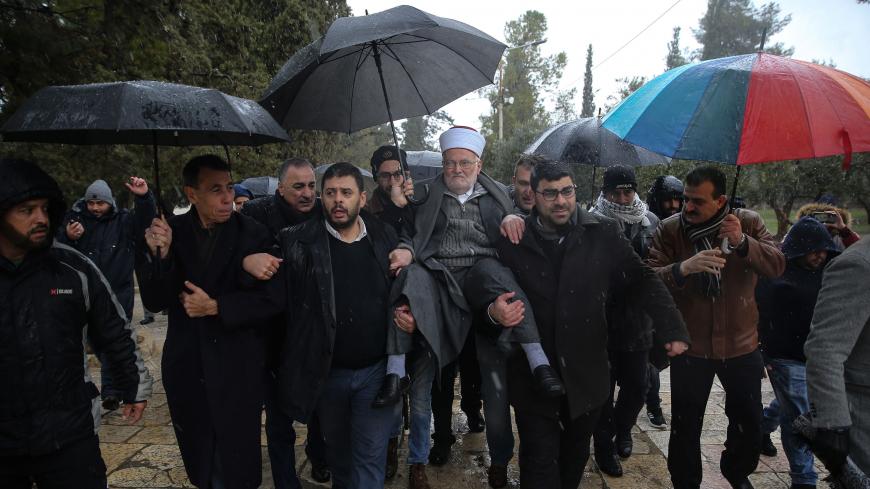 Sheikh Ekrima Sabri (C), the former grand mufti of Jerusalem, is carried to the flashpoint Al-Aqsa Mosque despite being ordered not to enter it by Israeli officials, Jerusalem, Jan. 24, 2020. - Mostafa Alkharouf/Anadolu Agency via Getty Images

Like any other large city, Jerusalem has its share of daily problems and challenges. But unlike in other such metropolises, one part of the city has a huge leadership vacuum. The 350,000 Palestinians who make East Jerusalem their home are undergoing one problem after another without any process that could create a leadership to address their daily issues.

The week of Jan. 24 is a perfect example. During that week, tens of thousands of people were in the streets demonstrating, complaining and searching for answers about issues that reflect the absence of trust and confidence in Israel and the Israeli authorities.

The week began with a defiant act by people living the holy city in response to what they considered anti-Islamic provocations against Al-Aqsa Mosque. The local Islamic leadership called on worshipers to come out in large numbers for the Friday morning dawn prayers Jan. 24. Despite rain and inclement weather, a very large number of Palestinians showed up in the Old City, including 81-year-old Ekrima Sabri, the former grand mufti of Jerusalem. He is the head of the Supreme Islamic Council in Jerusalem and has been giving Friday sermons at Al-Aqsa for decades.

A week earlier, Sabri had been called in by the Israeli police and verbally told not to enter Al-Aqsa Mosque; the police say Sabri incites violence in his sermons.

Sabri, since he was not given a written legal order, decided to join the worshippers at Islam’s third holiest site Jan. 24. After a discussion with the Israeli guards, who were unable to produce a legal document preventing his entry, he was carried by worshippers who insisted that their revered religious leader join them in prayer.

Before dawn the same day, Jewish extremists sneaked into a mosque on the southern outskirts of Jerusalem and set part of it on fire. The attackers left Hebrew language graffiti on the walls of the mosque in the Beit Safafa neighborhood calling for “death to Arabs” and “death to Palestinians.”

That night in the northern neighborhood of Beit Hanina, a tragedy was unfolding. An 8-year-old Palestinian child, Qais Abu Rmeleh, went missing. The people of Beit Hanina, many of whom had participated in the morning prayers in Al-Aqsa and had heard about the torching of the Beit Safafa mosque, immediately thought extremist Jews had kidnapped the boy. The fact that Beit Hanina is very close to Shuafat played into this fear since the case of the kidnapping and burning of a Palestinian teenager had occurred nearly six years earlier in that neighborhood; on July 2, 2014, Mohammad Abu Khdeir, a 16-year-old, was kidnapped in Shuafat, taken to a secluded forest and burned to death by three Jewish extremists.

The convergence of the events of the day and the disappearance of the 8-year-old turned the normally peaceful neighborhood into a rage-filled mob. Thousands filled the streets as they searched for the missing child despite the inclement weather. At one point, the crowd wanted to enter the nearby Jewish settlement of Neve Yacoub, but Israeli police prevented that, bringing about more friction and clashes.

Fourteen hours later, the body of the missing child was discovered in a water-filled cistern left uncovered after Israeli construction workers had erected the security wall surrounding East Jerusalem. Israeli officials traded blame as the municipality of Jerusalem claimed that the location lies in an area that is considered outside the city limits and under the jurisdiction of the Israeli civil administration responsible for West Bank Area C.

At 2 a.m. Jan. 25, despite the ongoing events, Israeli police went to Sabri's house and handed him a court order banning him from entering Al-Aqsa Mosque for four months. Sabri told the Saudi daily Arab News that the order was issued in revenge because the photo of him being carried into the mosque the day before in defiance of Israeli verbal orders had angered the Israelis

The three incidents that took place over two days signal a clear problem. Israel’s efforts to deny Palestinians in Jerusalem their political rights to choose their local leaders has meant that people cling to their own religious leaders, while at the same time they don’t accept or trust the Israeli occupiers who are forcing themselves on the large Palestinian population.

What makes this lack of trust even more worrisome is that Israel is not reining in Jewish extremists who torch mosques and are trying to take over Islam’s holy city. The mix of these elements produces a toxic atmosphere that turns a large city into a ticking bomb that could easily explode from a tiny spark. The leaderless 350,000 residents of East Jerusalem have become political orphans and they feel that they have to act alone to defend their existence and their rights in the city.