The Kurdish dialect of Hawrami is on the path to extinction, according to UNESCO. 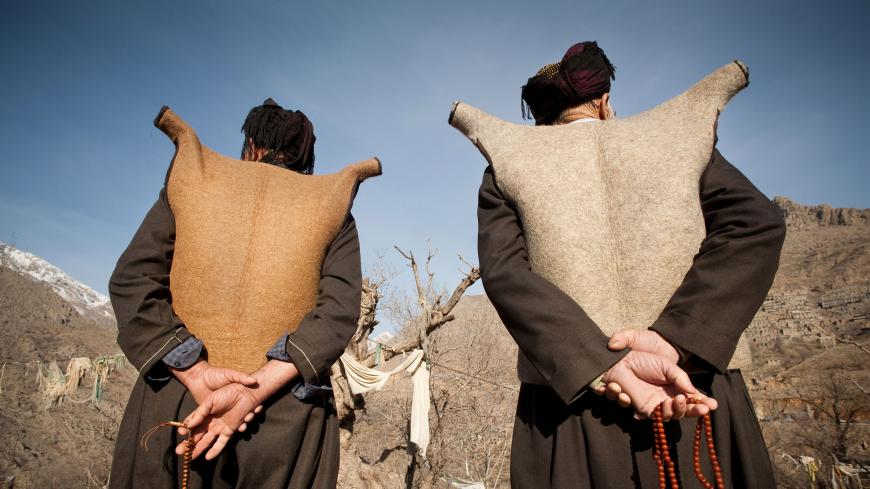 Hawrami, a dialect of the Kurdish language, is spoken by some 23,000 people in Iran’s Western Kurdistan and Iraq’s Hawraman area. UNESCO classed the dialect as “definitely endangered” in 2010.

The people of Hawraman, located in northeastern Iraq, mostly reside in the mountainous highlands where tough conditions have earned them the reputation of being self-reliant, resilient and resourceful. They are known for their traditional attire and long life expectancies.

They are also known as good fighters. After the First World War, when Sheikh Mahmoud Barzinji rebelled against the British in 1919, it was with the help of several hundred Hawrami fighters that he delivered a humiliating defeat to the British at Tasluja Pass just outside Sulaimaniyah.

Today, the region is well represented in national bodies. For example, Ashti Hawrami served as the Kurdistan Regional Government's minister for natural resources.

However, the language is fast disappearing as families leave Hawraman for larger towns such as Sulaimaniyah and Erbil and new generations grow up unable to speak their heritage language.

Concerned with the trend, one 73-year-old teacher decided to translate the Quran into his mother tongue and publish it last October. Jamal Habibullah Faraj Bedar, a retired schoolteacher from the town of Tawela, translated the entire Muslim holy book from Arabic.

He told Al-Monitor that he wanted to translate Quran into Hawrami, whose speakers became Muslims very early on — in the ninth century. Today, the population is almost entirely Sunni Muslims, many of whom lean toward mysticism. One of the best known centers of education in the area is a religious school in the border town of Byara, the site of tombs of Naqshbandi sheikhs who formed the major Sunni spiritual order of Sufism.

“However, they could not read the Quran in their own language. So, I wanted to be the first one to translate the Quran into Hawrami,” said Bedar. “In the past years, UNESCO has indicated that Hawrami is in danger as the dialect is no longer used [much] in writing. I was very concerned to hear this. Hawrami is an ancient language we inherited from our forefathers."

He went on, "I decided that the best way to keep my native language alive is to translate the Quran into Hawrami.”

Bedar finished the translation in two and a half months and a local businessman from Hawraman offered to print 1,000 copies of the book in Tehran.

Interpretations of the Quran have been translated into most of the world’s major languages even though Islamic Sharia forbids the holy book’s literal translation. It was therefore unsurprising when Kurdistan’s Regional Supreme Fatwa Council stated its opposition to Bedar’s move, based on a fatwa issued in 2013 against the translation of the Muslim holy book.

Bader disagrees. He said the council’s view is illogical and the Quran should be first translated and then interpreted line by line.

“Their view is not correct. Reason and logic are with me, not with them,” Bedar told Al-Monitor. “The Almighty God has sent the Quran so that people can read it, understand it, learn it and then practice it in life. If the view by the Supreme Fatwa Council is correct, then it means that the Quran has merely been sent to the Arabs and they alone can read and understand it.”

Mam Burhan Qanie, an independent lawmaker in the Kurdistan Regional Government, told Al-Monitor that he supports any effort that will help revive the Hawrami dialect, the mother tongue of many poets and intellectuals.

“I believe that the books of the major religions — Quran, Bible or Torah — should be translated into all key languages and dialects so that people can read them,” he said. “There is no verse in the Quran that says the text should not be translated into other languages. Islam itself says it is a religion for all mankind. How can Islam influence an Italian or a Greek if they cannot read it in a language they understand?”

Qanie, who sits on the parliamentary committee of culture, youth and civil society, said, “I cannot make any promises that the dialect [will be granted a formal status], but we support any efforts deemed as serving the Kurdish language and culture.”

Alarmed by the danger to their dialect, many intellectuals from Hawraman called last year for its inclusion in the Kurdistan region’s public education curricula. But nothing to that effect has yet happened amid complaints that the Hawrami dialect and the Hawraman area have been neglected both economically and culturally by the authorities.