Mosul joins the protests in Iraq but in a different way

Although Mosul seems quiet amid ongoing protests in Iraq, residents of the Ninevah capital are expressing solidarity with the anti-government protests in various ways. 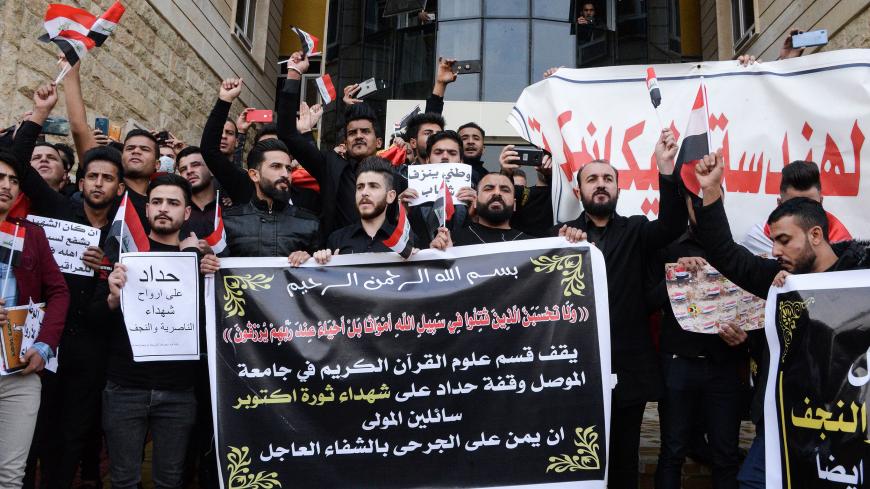 MOSUL, Iraq — Many in this capital of Ninevah province are supporting the anti-government protests taking place in Iraq, but in their own way.

For example, on Dec. 4, the usually bustling University of Mosul was fairly empty. Many students were not attending classes, adhering to the protesters' slogan and hashtag “No homeland, no work.” Students across the country have been skipping classes in opposition to a state they view as corrupt, authoritarian and controlled by neighboring Iran.

While many students in Mosul have not been going to class like their counterparts in Baghdad and in the south, those in Mosul are not protesting as fiercely as young people are in those other areas. One reason why is that many activists in Mosul are afraid to join Iraqis in the capital and elsewhere in the streets.

“Our hearts are with the protesters in Baghdad, but we can’t join them right now,” Aliya Muzaham, a volunteer with the Peace and Freedom Organization, told Al-Monitor. “We protested before and Daesh came.” Daesh is an Arabic abbreviation for the Sunni-led Islamic State (IS).

Mosul residents fear Iran-backed Shiite militias or IS will attack them or take advantage of the situation should they start protesting. However, some small demonstrations are starting in the largest city that was occupied by IS.

Solidarity with protesters and those who died

Anti-government protests began in Baghdad in October. The protesters are demanding the fall of the political system in place since the aftermath of the 2003 US invasion, a presidential system with direct elections, the prosecution of corrupt politicians and an end to Iran’s perceived dominance in Iraq, among other things. The protests have since spread to other cities in southern Iraq.

As of December, nearly 500 had died in the protests, with 27,000 injured, some of them permanently disabled, according to the quasi-governmental Iraqi High Commission for Human Rights. The figure mainly includes protesters, but security service members have been killed and injured as well.

So far in Mosul, there have only been some small demonstrations at the University of Mosul, according to Ali Imad, a Peace and Freedom Organization activist. The group supports peace-building and nonviolence programs for Mosul residents from different ethnic and religious groups.

Instagram posts show University of Mosul students wearing black in support of protesters in Iraq and holding signs in solidarity with killed protesters in the south.

“Right now, there are only strikes at the university in solidarity and wearing black for the martyrs,” Imad told Al-Monitor, saying these are the only regular demonstrations anywhere in Mosul.

Social media pictures show gatherings where students wear black and stand together at the university.

There was also an impromptu protest in November following Iraq’s soccer victory over the United Arab Emirates, where people shouted “With blood and spirit we sacrifice for Tahrir,” referring to the center of the protests in Baghdad, Tahrir Square.

The participants used an event where Iraqis were in the streets for a sports event to get political, Muzaham said.

“It was a soccer celebration, but also supporting the martyrs in Baghdad and Nasiriyah,” she said. “They took this opportunity and wore black for the people who died.”

"Sunni politicians are even more corrupt"

Many in Mosul back the protests, even though the overt support that has taken place has been limited to the soccer celebration and small gatherings at the university. One major reason why Mosul residents favor the protests may be due to the protests’ anti-corruption message; corruption is rife in the city, according to Muzaham.

“When you go get any documents, you need to pay to make it ‘free,’” she said, referring to the acquisition of needed government IDs. “You can’t get anything without 'wasta.'”

Wasta, an Arabic word meaning “connections,” refers to people in government or positions of power who can make obtaining state services easy.

“All of Iraq is corruption,” Peace and Freedom Organization volunteer Younes Abbas told Al-Monitor. “Sunni politicians are even more corrupt.”

Mosul is the most populous Sunni-majority city in Iraq.

Posters targeting Iraqi parliament Speaker Mohammed al-Halbusi, the highest-ranking Sunni politician in the country, are common in Baghdad’s Tahrir Square. Some believe the businessman became speaker only due to his wealth.

One reason Mosul residents do not protest more is the fear that IS will take advantage of any chaos in the city, as the militant organization did in 2014. Some also fear the Iran-backed Popular Mobilization Units (PMU), which control many checkpoints and yield considerable power in Mosul.

The mostly Shiite PMU militias played a crucial role in liberating Mosul from IS, but are seen as an extension of Iran at a time of rampant anti-Iranian sentiment. Protesters recently torched the Iranian consulate in the Shiite holy city of Najaf. In October, a video surfaced showing Abu Azrael, a PMU social media star, badly beaten by protesters in Baghdad.

Mosul is strategic for the PMU, which does not want to lose the city to protesters, IS or anyone else, Iraqi political analyst Diyari Salih told Al-Monitor.

“The Hashd believes Mosul has symbolic geopolitical importance,” Salih said, using the Arabic-language acronym for the PMU. “It’s a rich city with an active economy...It forms an important bridge between the Kurdistan Region and the rest of Iraq.”

Salih also said the PMU also wants to keep Mosul to prevent Kurdish forces from moving back into the disputed Iraqi-Kurdish territories, which they did following IS’ rise in 2014, before losing them to Iraq in 2017 after the Kurdistan independence referendum.

“The Hashd recognizes that there is a Kurdish desire to annex Sinjar,” he said, referring to the contested city west of Mosul. “The Hashd’s presence prevents the Kurds from widening their territory.”

“The Hashd is also thinking to undercut Turkey’s role there.”

Turkey maintains a military base in Bashiqa, which is also in Ninevah province.

Mosul has protested before. The city and other Sunni areas experienced widespread demonstrations in 2012 and 2013 before a crackdown from the government. A year later, IS swiftly took the city. Today, Mosul residents fear they will be called supporters of Saddam Hussein or IS if they take to the streets again.

Mosul students and activists are quietly expressing support for protesters in Baghdad in the south despite this. During IS’ occupation of Mosul there were few shows of solidarity with the city from other Iraqis, though, because most Iraqis felt all of Mosul was IS, Imad said.

“Daesh said they were true Sunni Islam,” he said. “Because Daesh used our religion, we need to speak out to Baghdad and tell them this is not true.”

Imad is speaking openly about the protests to show Baghdad that people in Mosul are not all IS. “Baghdad didn’t support Mosul when Daesh came,” he said. “They thought all of Mosul was Daesh.”