Iran's Zarif under fire for saying he’d negotiate with US

Iranian conservatives have attacked Iran’s foreign minister for stating that Iran is open to talks with the United States. 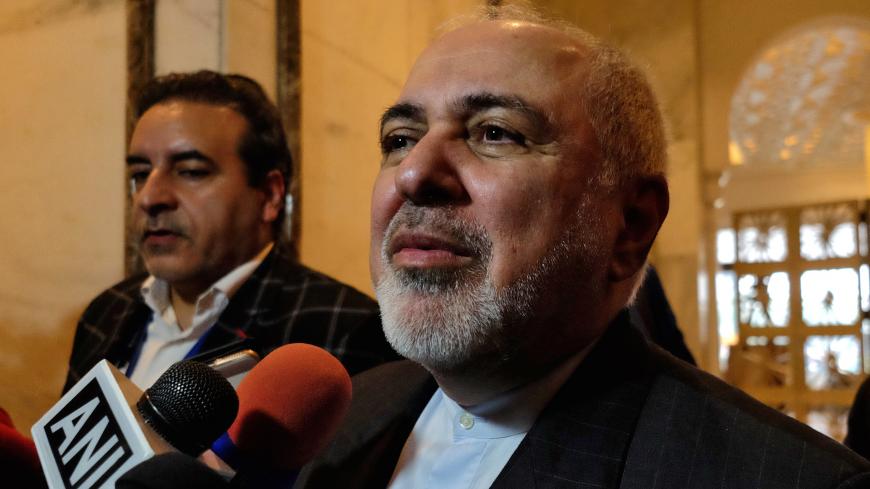 A number of protesters gathered outside of Iran’s Foreign Ministry building to demand the resignation of Foreign Minister Mohammad Javad Zarif over an interview with the German publication Der Spiegel in which he discussed negotiations with the United States.

In the interview, Zarif was asked about the possibility of negotiations with the United States following the assassination of the Islamic Revolutionary Guard Corps' Quds Force commander Qasem Soleimani. Zarif repeated Iran’s stated policy since the United States exited the Joint Comprehensive Plan of Action between Iran and six world powers in May 2018, saying, “The Trump administration can correct its past, lift the sanctions and come back to the negotiation table. We’re still at the negotiation table. They’re the ones who left.”

In the heightened tensions between the two countries, the comments took on a life of their own. President Donald Trump responded in tweets in English and then in Persian, “Iranian Foreign Minister says Iran wants to negotiate with the United States, but wants sanctions removed. No thanks.” Zarif responded with tweets of his own that Trump is “better advised to base his foreign policy comments and decisions on facts, rather than Fox News headlines or his Farsi translators.” He posted a screenshot of the comments from a transcript of the interview. In another tweet, Zarif claimed that Trump simply wants a “Trump deal” and reiterated Iran’s position that “the only possible venue for talks is at the P5+1 table.”

Despite the exchange of tweets, Zarif still faces domestic turmoil over the initial comment. Judiciary chief Ebrahim Raisi spoke at a Jan. 25 meeting for the Supreme Council of the Judiciary, where he said that he had spoken to Iraqi officials who were looking into taking legal action against the United States for the assassination of Soleimani along with Popular Mobilization Units commander Abu Mahdi al-Muhandis at a Baghdad airport. Raisi then took a swipe at Zarif, adding, “We too will pursue this through international forums. Sooner or later we will meet with the murderers of Soleimani and not for negotiations and talks, but for trial and punishment.”

Kayhan editor Hossein Shariatmadari was more direct, asking Zarif in an editorial, “With what goal are you pursuing talks with the murderer of martyr Soleimani?” Shariatmadari wrote that even if Trump returns to negotiations, his administration has made it clear it wants to negotiate with Iran on its missile program and support for regional groups. He added, “If it were not for the missile industry, they would have flattened Iran to dirt in one night.”

After the controversy erupted, the foreign minister said in a statement that the country is being polarized between those who support negotiations and those who don’t for domestic political purposes ahead of the parliamentary elections. He added that such discourse will have “negative consequences on national interests and public trust.”