Intel: How Trump has laid the legal groundwork to strike Iran after Iraqi militia attacks 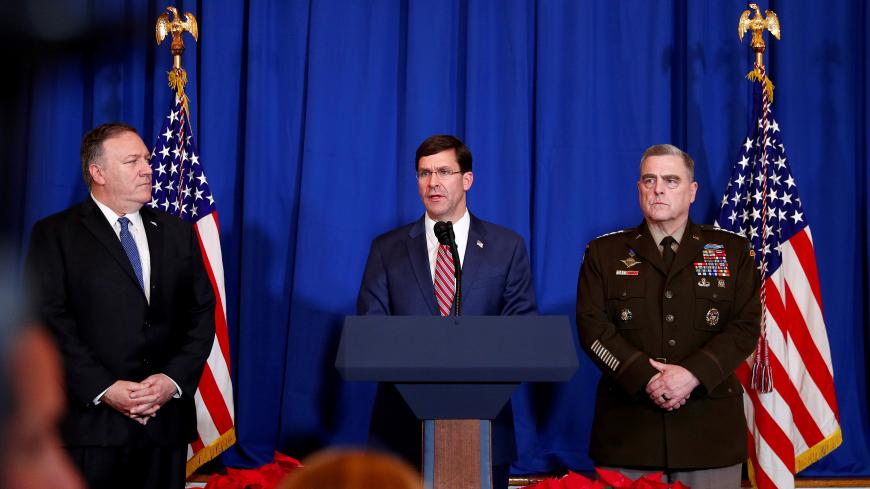 US Defense Secretary Mark Esper speaks about airstrikes by the US military in Iraq and Syria, at Mar-a-Lago in Palm Beach, Florida, US, Dec. 29, 2019. With him are US Army Gen. Mark Milley and US Secretary of State Mike Pompeo. - REUTERS/Tom Brenner

Mounting tensions between US forces and Tehran-backed proxies in Iraq could lead to broader American military action against Iran. If that happens, President Donald Trump already has at his disposal a legal opinion the State Department submitted to Congress last June.

“We do not make a distinction between the Iranian regime and any of its proxies that they organize, train and equip,” a senior State Department official told reporters today. “We are not giving Iran the fiction of deniability any longer.”

Why it matters: Democrats in Congress are worried the Trump administration could use two prior military authorizations — one from 2001 and the other from 2002 — to use military force against Iran as tensions mount in Iraq.

The State Department submitted a legal opinion to Congress last June stating it did not view either Authorization for Use of Military Force (AUMF) as greenlighting strikes against Iran “except as may be necessary to defend US or partner forces engaged in counterterrorism operations or operations to establish a stable, democratic Iraq.”

“The AUMF does permit us to operate defensively, so in this case, we were attacked by a militia in Iraq and then we took strikes as a matter of self-defense, which is consistent with the AUMF,” a senior State Department official told Al-Monitor.

What’s next: Iraq has objected to the US strikes against Kataib Hezbollah as a violation of its sovereignty. But it’s unclear how much authority the current government has as protesters flock to the streets to demand a political overhaul and an end to Iranian influence over Baghdad.