The Pentagon awarded a $15 million contract to a Virginia-based company to provide English-language training to Saudi Arabia’s air force at an air base in Riyadh, just hours after a Saudi national killed three people at a naval installation in Florida on Thursday. 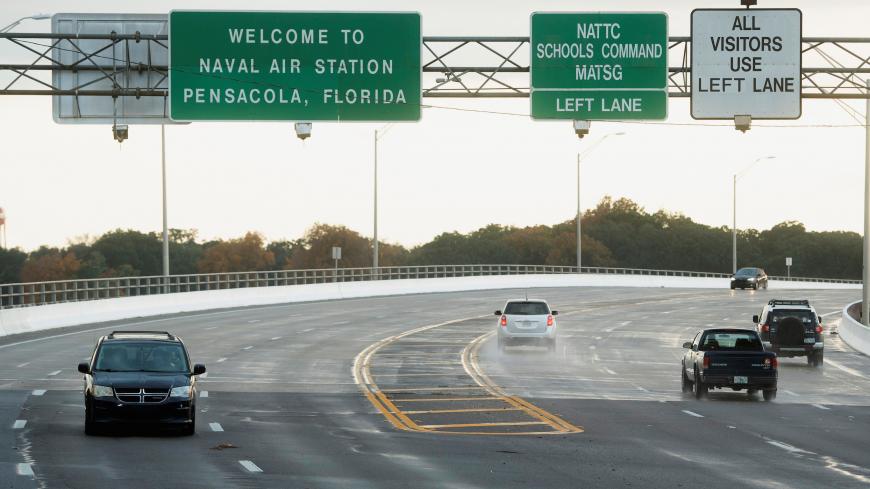 Traffic on and off base is restricted after a member of the Saudi Air Force visiting the United States for military training was the suspect in a shooting at Naval Air Station Pensacola, in Pensacola, Florida, US Dec. 6, 2019. - REUTERS/Michael Spooneybarger

The Pentagon awarded a $15 million contract to a Virginia-based company to provide English-language training to Saudi Arabia’s air force at an air base in Riyadh, just hours after a Saudi national killed three people at a naval installation in Florida on Thursday.

The move is the latest effort from the Pentagon to temper blowback from the shooting on the robust US military relationship with Riyadh, as the United States reportedly looks to deploy thousands more American troops to the kingdom to counter Iran (though the Defense Department has refuted these stories at least five times in the past week).

Downplaying the impact: Speaking to Fox News Dec. 8, Defense Secretary Mark Esper downplayed reports that other Saudi trainees had filmed the shooting, telling Chris Wallace that “today, people pull out their phones and film everything and anything that happens.”

Esper also told Wallace he’s asked US base commanders to review their screening procedures for foreign nationals in the wake of the shooting.

Despite reports that the suspected gunman, Mohammed Saeed Alshamrani, a pilot-in-training with the Saudi air force, showed footage of mass shootings to fellow trainees, Esper also refused to call the killings an act of terror at a defense forum in California on Saturday.

Not a consideration for future deployments: Esper insisted the incident wouldn’t factor into future Donald Trump administration decisions to deploy troops to the region. "Saudi Arabia is a longstanding partner of ours in the region," he said.

The United States has sent more than 14,000 American troops to the Middle East over tensions with Iran since the summer, deploying nearly 2,000 forces to the kingdom in October after Tehran-linked cruise missile and drone attacks on a Saudi Aramco facility.

Pushback coming? But Congress could still push back on close US-Saudi ties that have already been thrown in jeopardy by the ongoing war in Yemen and the 2018 murder of journalist Jamal Khashoggi. While Trump has moved to defend Riyadh in the wake of the shootings, White House ally Rep. Matt Gaetz, R-Fla., who represents the district where the shooting took place, said Dec. 8 on ABC’s "This Week" that the incident “has to inform” US ties with Saudi Arabia.

What’s next: Congress has also wrapped up talks for the annual US defense authorization bill, which could include provisions that would push back Pentagon support for the Saudi-led war in Yemen.

Know more: Check out Al-Monitor’s reporting on Trump’s interactions with Saudi Arabia after the shooting.