As protests continue in Lebanon, a group of lawyers is working to help detainees and push for the enforcement of laws protecting freedom of expression, association and assembly. 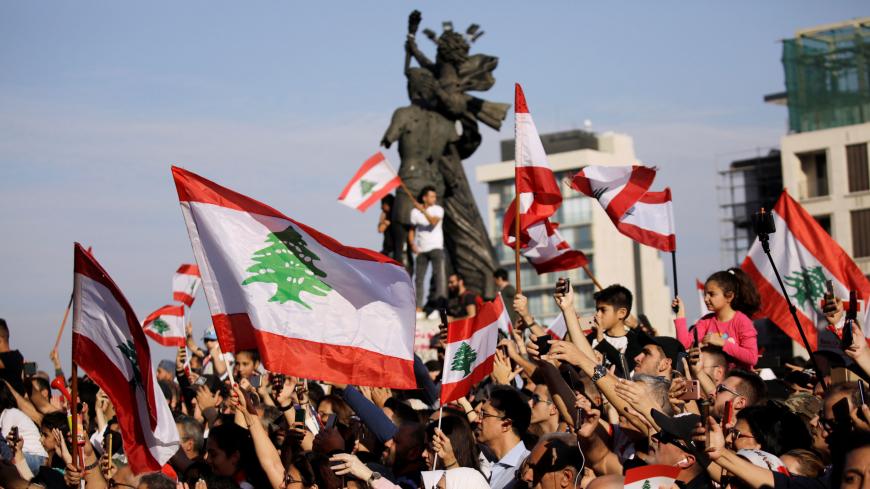 Attendees wave flags during a parade on the 76th anniversary of Lebanon's independence, at Martyrs Square in Beirut, Lebanon, Nov. 22, 2019. - REUTERS/Andres Martinez Casares

BEIRUT — Before the Lebanese protesters head down to the streets, some put on face paint and others grab a Lebanese flag. Many write a phone number on their arms for a hotline started by a group of lawyers to assist protesters in navigating Lebanon’s vague legal system.

The Lawyers Committee for the Defense of Protesters (LCDP) has members around the country and a similar hotline has been set up by the Tripoli Bar Association in Lebanon’s second-largest city.

Nermine Sibai, a member of the LCDP since it was founded in 2015 during the protests centered on the trash crisis, told Al-Monitor, “In 2015, we had this urge and need for the lawyers to make a small committee. We were around 15-20; now we are 50-60.”

The LCDP has received over a hundred calls a week since the protests began Oct. 17 from people being detained, beaten by Lebanese security forces, unlawfully fired from work and more.

The protests that began against the austerity measures, corruption and the ruling elite are the biggest demonstrations in Lebanon since 2015. Sibai pointed out, “The difference is the scale. In 2015 it was centralized in Beirut and now it is in all the towns and cities.”

Sibai also noted a change in how the Lebanese authorities have been responding. “Back in 2015 people would [be detained] for days, but now there is so much pressure from the people. They are staying outside the police stations and not leaving.”

In Beirut, when protesters have been arrested, demonstrations have quickly formed outside the police stations where they are held, often leading to a release within a day. Outside of Beirut, some protesters face different treatment. Four demonstrators in the southern city of Sour are still detained despite being arrested over a month ago and no evidence of criminal activity has been presented, Sibai told Al-Monitor.

Despite the LCDP documenting 300 arrests linked to the uprising as of Nov. 18, few have been officially charged with a crime. However, the delay does not mean they won’t be, as Lebanon’s laws concerning freedom of speech, association and assembly are extremely malleable.

Layal Sakr, a lawyer and co-founder of the nongovernmental organization Seeds for Legal Initiatives, is trying to address this problem by providing public information on Lebanon’s legal code in an accessible manner online.

Sakr told Al-Monitor, “If you imagine a pyramid, we have the constitution at the top, the international treaties and then the laws, and they should all be aligned. Unfortunately, the [local] laws are in contradiction.” Sakr also stressed that the laws in the Penal Code are “very vague” concerning disruptions to “general peace” in Articles 345 and 346, which are used “all the time.” Sakr said, “We can't really define what general peace is.”

The term could include protesting techniques like burning tires and blocking roads — despite Sibai saying they should be protected under freedom of expression and general assembly.

These are by no means the only laws that threaten protesters. With many on the street insulting politicians, hundreds of thousands could technically be prosecuted.

Article 384 prohibits insulting the flag, the national anthem and the president. Articles 385-388 cover public defamation and has been found to include comments on social media. All these articles were being used to suppress freedom of speech in the run-up to Oct. 17.

On Sep. 30, President Michel Aoun’s office also reminded the country of Article 209, warning, “Those who broadcast fabricated incidents or false allegations about a decline in the national banknotes to undermine confidence in the state’s robust liquidity and bonds” could face up to three years in jail. He reiterated the comment on Dec. 2 amid a worsening economic crisis. The unofficial exchange rate of the Lebanese pound to the dollar has reached 2,250, while the official rate is 1,507.

Sakr said another "very vague" article — not in the Penal Code but in the Military Justice Code — is “really a big concern.” Article 157 allows the military to arrest citizens if they insult the flag or the military's “dignity, reputation and morale, or do anything that weakens order in the military or that undermines subordination to superiors or respect owed to them.”

The LCDP said arbitrary arrests of protesters by the military and the lack of information about them can be considered forced disappearances.

If charged under the Military Justic Code, civilians are tried in a parallel legal system in military courts, Sakr explained. “It is hard for lawyers to be with [the accused] in a military court.”

Some lawyers are hopeful that the system can be reformed, given the momentum of the protests. Sibai said the rarely applied Article 47 of the Lebanese Criminal Code of Procedure guaranteeing detainees the right to medical assistance and contact with lawyers may start to be enforced.

The recent election of independent Melhem Khalaf to head the Beirut Bar Association is feeding this optimism. Khalaf's opponent ran as an independent as well, but was supported by major political parties.

“Getting an independent at the bar means our work will be facilitated,” Sibai said, adding, “We didn't have access to where protesters were taken. Whenever we went to the bar to ask about this, there was nobody. … The new president will push [for Article 47] and it will not be violated anymore.”

She added that on Nov. 29, two activists in the 2015 protests were acquitted of charges under Article 384, setting a precedent. The lack of evidence and exceptional circumstances of the arrests since Oct. 17 is giving the LCDP solid ground from which to defend the accused from future similar charges.

Article 13 of the Lebanese Constitution protects freedom of expression, assembly and association. The country also ratified the International Covenant on Civil and Political Rights in 1972.

Sibai said, “Because the laws are vague, it is both a disadvantage and an advantage. You can apply them in the strictest and narrowest form, but you can also raise the ceiling, and this is what the revolution is helping us do.”