A collective of activists in Lebanon and abroad are archiving the Lebanese protests that broke out more than two months ago as a way to preserve the materials for future analysis. 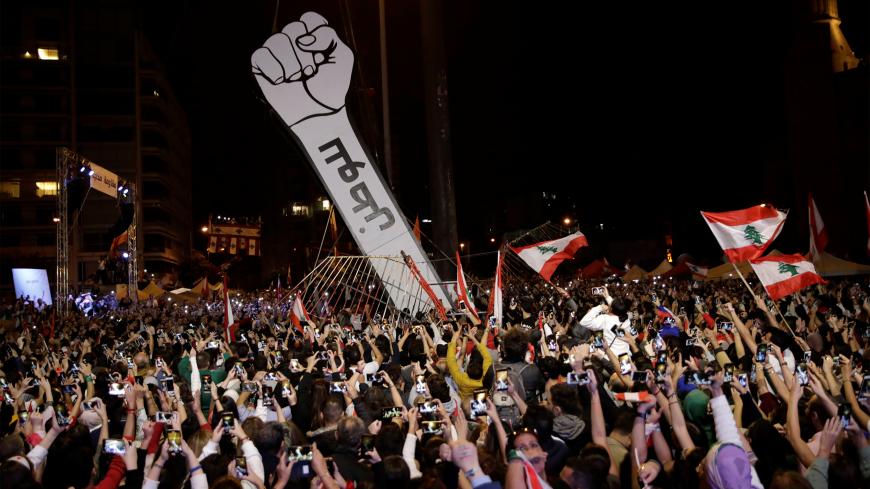 Protesters take pictures as the image of a fist is erected to replace a previous one that was burned at Martyrs' Square, Beirut, Lebanon, Nov. 22, 2019. - REUTERS/Andres Martinez Casares
Zoe Dutton
@@zoedutton48
December 26, 2019

Late on a smoggy Friday afternoon Dec. 13, three friends sat huddled around a laptop at Raseef coffeeshop in the Hamra neighborhood of Beirut. On Twitter, many Lebanese users urged people to head down to Martyrs’ Square to protest over the weekend. Thousands did, with state security forces tear gassing and shooting rubber bullets at demonstrators, who posted videos of the confrontations online.

With each day of the mass anti-government demonstrations that have swept Lebanon for the past 12 weeks, protesters are adding a new page to the country’s history books. To ensure their activism is not lost or distorted by the passage of time, a handful of tech-savvy citizens are working to preserve and archive materials associated with the demonstrations through open-source online projects.

“Collaborating on the archive was a way for me to use my skill set — which is not really normally applicable to political revolutions — to help out and to show up for people,” Ramsey Nasser, a Lebanese coder who works in New York, told Al-Monitor. “Plus, you know, the reality is I have power in New York. So I could actually connect to activists on the ground,” he added, alluding to the daily electricity outages that are a common complaint among protesters fed up with politicians’ corruption and mismanagement.

Along with Nasser, friends Marc Farra and Majd al-Shihabi are creating “Lebanon 2019,” a series of interactive maps about the demonstrations, while the Beirut-based media advocacy group Maharat has partnered with analytics company Data Aurora to launch the interactive platform Lebanon Protests, breaking down Twitter engagement. The American University in Beirut has also published an online research guide, Lebanon Protests 2019, to accompany the thousands of documents it has preserved for in-person viewing at its campus library.

These projects follow an explosion of social media accounts and blogs displaying in-depth photo galleries and analysis about the protests.

But while demonstrators in Lebanon are already plenty active online, many of the uprising’s most ambitious digital efforts are helmed by millennial technologists and their peers in the sizable Lebanese diaspora, whose deep engagement in online activism has bridged their geographical distance from the protests. Particularly impressive is Daleel Thawra (Arabic for the Revolution’s Directory) run by volunteers scattered across Beirut, London and New York. With few opportunities in Lebanon, many young Lebanese say they feel forced to leave their families for work abroad, and remittances are essential to the country’s economy.

Now, preserving the protests’ sizable digital presence in open-source archives is the logical next step in these ongoing online efforts.

The trio of Lebanon 2019 creators said they had seen numerous uprising-related posts and images vanish.

“If we don’t download and save this stuff, it’s gone forever,” Nasser told Al-Monitor, noting that people are sometimes pressured to delete posts, while tech companies also remove material. “The story we are trying to capture is ephemeral.”

Nasser is now in Beirut, and Farra has been in there for a couple months. Although Nasser and Farra work as coders in the United States, both are in Beirut over the holidays, their days split between attending protests and working on the archive. They'd previously collaborated with Shihabi, a systems engineer and AUB graduate student, to map the wildfires that devastated Lebanon a week before the protests began Oct. 17, following the announcement of a tax on WhatsApp calls. During the uprising’s initial days, they created a heat map to show its spread, which at the peak of the protests received over 20,000 views a day.

The project is well-suited to the demonstrations’ diffuse, popular character.

“Our question has been: How can we make sure that what happens in Lebanon, in all its depth, gets remembered so we can understand it better in the future?” Shihabi told Al-Monitor. “Archives allow us to study and learn from the past.”

The creation of the archive comes during a renewed discussion in Lebanon about the country's history. The protests have been hailed for their non-sectarian character, and many in the streets have expressed a sense that the poisoned legacies from the country’s 1975-1990 civil war have at last been truly transcended.

Shihabi previously helped to create The Archive of the Disappeared, a digitized trove of newspaper clippings from Lebanon’s Civil War collected by family members who are still seeking justice for their lost loved ones. He emphasized that because only a small portion of events are ever even recorded, much less preserved, an essential aspect of archival work is developing political methodologies that endeavor to be representative.

In recent years, many online projects documenting political movements have sprung up around the Middle East. In 2018, a group of Egyptian activists created a repository of video footage from the 2011 uprising called 858: An Archive of Resistance. A Syrian-led open-source platform called the Syrian Archive gathers, corroborates and preserves visual evidence of war crimes and human rights violations in the country. More than 10,000 songs, graffiti and other artworks created in Syria have been uploaded to the Creative Memory of the Syrian Revolution platform since 2011. Shihabi has also collaborated on Palestine Open Maps and the Syrian Oral History Project, through his involvement with the Arabic-English tech collective Masrad.

Nasser told Al-Monitor that creating online platforms for Arab audiences involve an extra layer of difficulty, because most algorithms and digital typography are designed for the Latin alphabet and incompatible with Arabic script. He runs a blog, "Nope, Not Arabic," dedicated to the issue.

Researcher Sina Zekavat has observed that the 2011 Arab Spring sparked the dissemination of “a new Western savior discourse” around events in the region, through the media’s use of terms like “Facebook revolutions” or “WhatsApp and Twitter revolutions.” These tropes, he argues, misattributed political movements to technological platforms, forming a discourse that erased the collective agency of activists and inhabitants. In practice, their determination, creativity and labor are what give “meaning to modern digital technologies and transforms them from mere consumerist products into ad-hoc tools of revolt and resistance.”

Mohamad Najem, the executive director of the Beirut-based digital rights group SMEX, told Al-Monitor that archival efforts associated with Lebanon’s uprising will be an invaluable resource for future activists, researchers and journalists. Najem and other Lebanese activists have continually advocated for measures to ensure that protesters are able to engage in free open dialogue, both online and in the streets.

“We can’t pretend we have technological solutions to the revolution’s immensely complex political, social and communal questions,” Farra told Al-Monitor. “Right now, we are just trying to capture a ground truth of what is happening in Lebanon, so we can remember it tomorrow.”