“A National Monument” exhibition in Beirut presents the changing map of Palestine after the Nakba. 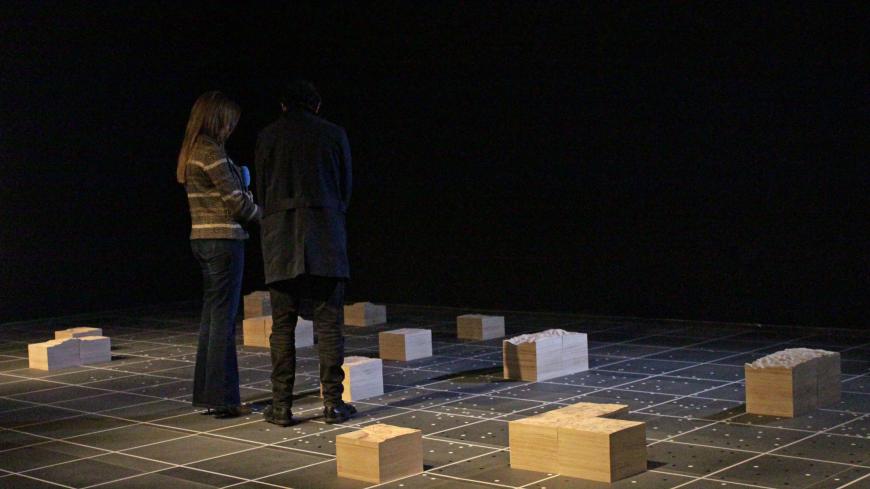 BEIRUT — Thirty-two plywood boxes are meticulously positioned on the floor of Beirut’s Dar El-Nimer for Arts and Culture, forming a map of Palestine. On top of each box is a detailed carving of the largest 22 cities in the region. Between the wooden carvings of Safed, Galilee and Gaza City are black and white dots, symbolizing the Palestinian villages that were depopulated during the 1948 Nakba, or “Catastrophe,” which marks the establishment of Israel. Together they form a semi-3D topographical map of 1940s Palestine, radically different from Palestine today, in an effort to contextualize the impact of the Nakba.

The 3D map is the center piece of the exhibition “A National Monument,” which is the last event of a yearlong project by Visualizing Palestine, an organization that creates infographics and artworks on the Israel-Palestine conflict. It is presented in the two-story building — in Le Corbusier’s domino style — that houses Dar El-Nimer, a Beirut-based Palestinian arts and culture nongovernmental organization.

The event showcases three exhibits: a collection of 3D wooden topographical maps of 1948 Palestinian cities, an online platform tracking the villages depopulated after the Nakba and scarves with a rectangle pattern that symbolizes the Palestinian villages destroyed or replaced by Jewish towns in 1948. 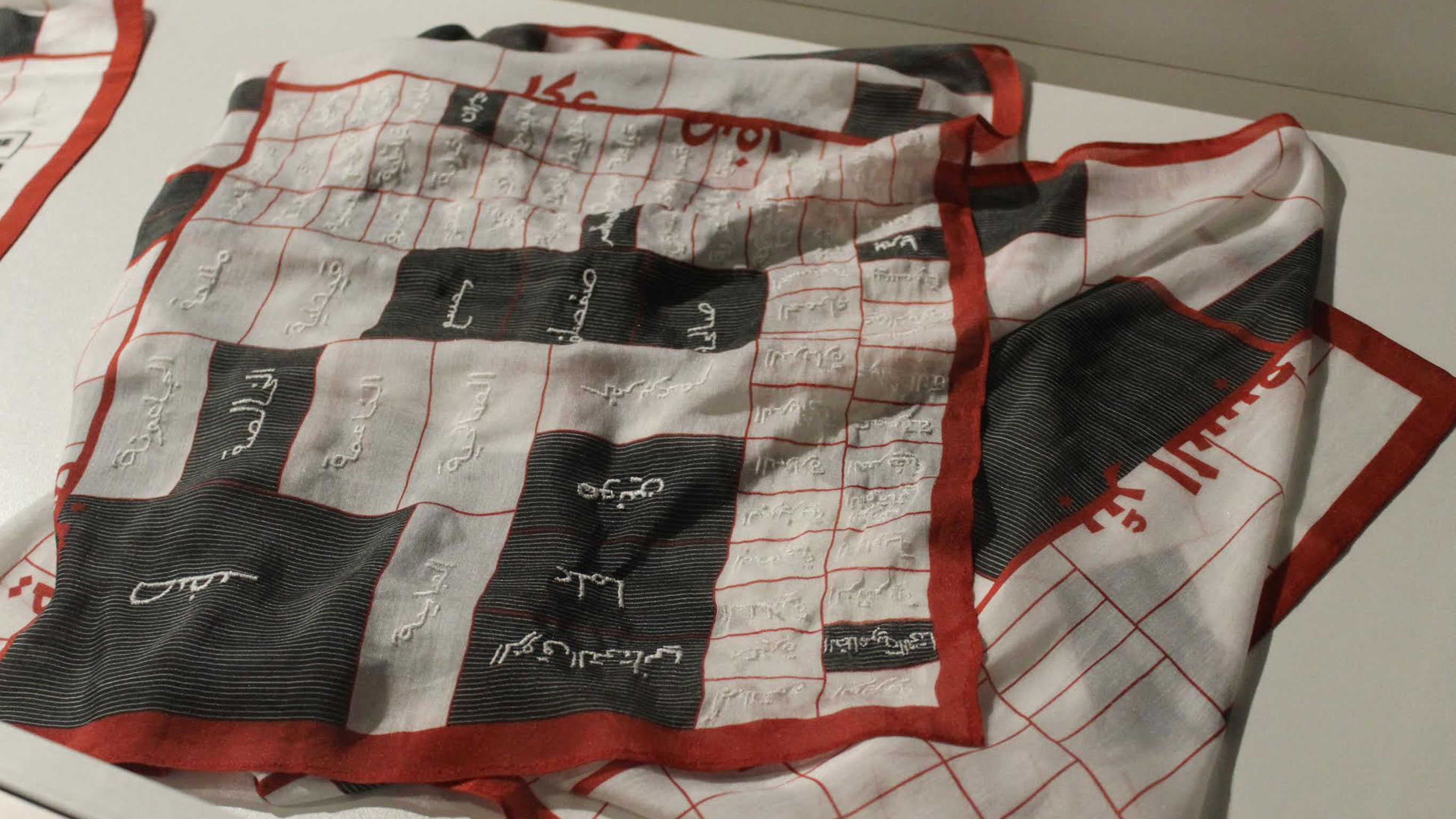 A photo of scarves made by Visualizing Palestine, with a rectangle pattern depicting the villages that were depopulated during the 1948 Nakba, at "A National Monument" exhibition, Dar El-Nimer for Arts and Culture in Beirut, Lebanon, Jan. 10, 2019 (Sam Brennan/Al-Monitor).

Each exhibit aims to present the Nakba to a broad audience by utilizing different mediums to make this often distant event more tangible.

Marwan Rechmaoui, the artist who created the 3D models, told Al-Monitor, “I was surprised by some of the questions I was asked at the exhibition — like, 'What happened in 1948?' We are only a few hours away from the issue. Some people don’t know, and it is good to remind them … and how we are still feeling the consequences of it today.”

During the formation of the State of Israel and the 1948 Arab-Israeli War, roughly 700,000 Palestinians were either expelled or fled, and over 500 villages were evacuated or demolished by Israeli forces, with many replaced with Jewish towns.

Currently over 5 million Palestinian refugees are registered with the United Nations Relief and Works Agency for Palestine Refugees in the Near East. Palestinians commemorate this event on May 15, a day after Israel celebrates Independence Day.

The exhibition is an attempt to educate and inform the public on an event that happened over 80 years ago.

“Those who know about [the Nakba] assume it is a well-known issue,” said Rechmaoui. “[By contrast] you would be surprised that the Palestine issue is out of the limelight.”

To introduce this issue to a wide audience through art, Rechmaoui and Ahmad Barclay, a partner of Visualizing Palestine and curator of the exhibit, combed through research material and archived maps of the region dating back to the 1800s.

“We really used a lot of different sources,” Barclay told Al-Monitor, crediting the Palestine Land Society and David Rumsey Map Collection among others for the material. He said, “Some [maps] we even got from the Australian National Library.”

However, Barclay explained that this information was not user-friendly and failed to convey the narrative of what happened in 1948. So, they decided to create a 3D map and “bring something into a space that people can experience.”

To achieve this, the team drew on a map obtained through the National Library of Israel, which showed in great detail the roads and villages of Palestine under the British Mandate in the early 1940s. This was combined with satellite images from the US National Aeronautics and Space Administration in order to create a detailed 3D model of Palestine. Rechmaoui then etched this into the plywood blocks.

Barclay explained, “The aim of Visualizing Palestine is really advocacy, by using visual media and visual storytelling to communicate about Palestine and Palestinians. … We felt it was natural to extend that into 3D, to kind of broaden the audience outside of advocacy and activism to a more cultural space.”

Dar El-Nimer, which offered Visualizing Palestine the space for the exhibit, was established in 2016 by Rami El-Nimer, a general manager at First National Bank of Lebanon. Born in Nablus, Palestine, Nimer had collected over the years a vast amount of art and artifacts from around the region.

Omar Thawabeh, the head of communications and content at Dar El-Nimer, told Al-Monitor that the organization’s goal is “to share this collection with the public … [and to create] a Lebanese, Palestinian and Arab platform that showcases art from Palestine and beyond.”

He said, “Our aim is also to show different genres and materials of art, which can be creative, cultural, academic and historical. ["A National Monument"] I think is a combination of the artistic and the historical.”

The historical value of the event manifests through a project conducted in tandem with the 3D model maps. During the research for the exhibition, Visualizing Palestine also developed an interactive online platform, Palestine Open Maps, which overlays the maps of the region from 1880 until today, with dots indicating the villages that were depopulated. This platform is showcased at the exhibition.

Barclay explained that whereas the models were made to create an experience, Palestine Open Maps was made for an analytical purpose, “so you can search for places and understand how things have changed over time.”

The final work shown at the exhibition continues the theme of education around the Nakba, showing a scarf with a rectangle pattern.

Joumana al-Jabri, the co-founder of Visualizing Palestine, told Al-Monitor that each of the 530 rectangles symbolizes a village that was depopulated in 1948, targeting an audience that would not usually be exposed to information on this issue.

After its run at Dar El-Nimer on Jan. 10-26, Visualizing Palestine is planning to take the exhibition to other countries in the region and Europe, to audiences who are even less familiar with the scope of the events of 1948.

Both the scarves and the 3D models will be for sale eventually. However, Jabri stressed, “We are not promoting consumerism, we are promoting knowledge.”