Cairo brought together leaders of the Hamas and Palestinian Islamic Jihad political bureaus this month to ensure they're all on the same page regarding the truce with Israel. 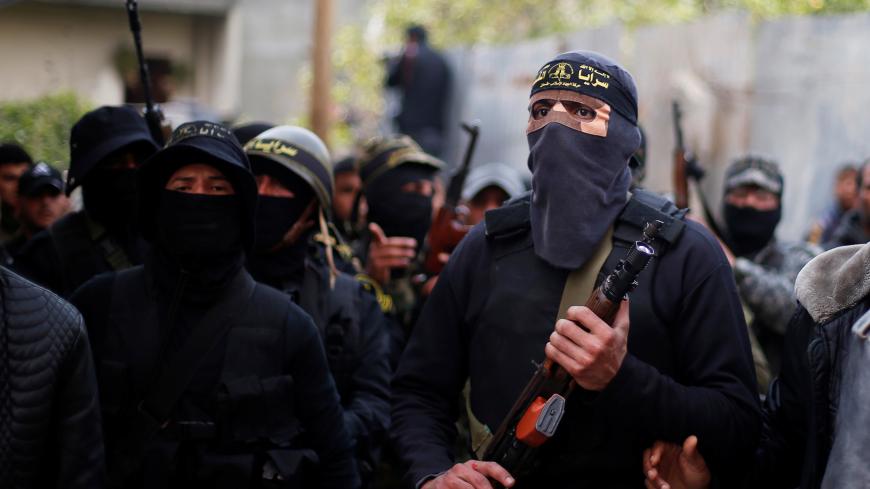 The Dec. 3 meeting was chaired by Hamas political bureau head Ismail Haniyeh and his Islamic Jihad counterpart, Secretary-General Ziad al-Nakhalah. The men discussed a number of issues, most notably the Egypt-sponsored truce understandings signed between the Palestinian resistance and Israel in late March.

Following the meeting — which dragged on for more than five hours — the two movements said they will continue to coordinate closely and further develop joint operations. They stressed that their strategic relations are tantamount to a sustained alliance.

They also claimed to have overcome all attempts to sow discord among the movements’ members, which they said is what caused Hamas to refrain from participating in the Nov. 12-13 military confrontation that ignited between the Islamic Jihad and Israel. (Some observers, however, have speculated that Hamas sat out the fight to score points with Israel.) The fighting, in which 34 Palestinians were killed, erupted after Israel assassinated Islamic Jihad commander Bahaa Abu al-Atta and his wife, and in a separate attack that day, killed a son of Islamic Jihad leader Akram al-Ajouri.

Hamas won't be absent in the future, according to a senior Hamas source who declined to be named. “Hamas will not remain silent at seeing Israel assassinating Palestinian figures again, though it remains committed to the truce understandings, along with the rest of the factions," he told Al-Monitor.

Describing the Dec. 3 meeting, the source said, “The truce dossier got the lion’s share of the talks between the Islamic Jihad and Hamas leaders, as well as the movements’ talks with Egyptian officials. [The two meetings] aimed to complement Egyptian efforts to establish the truce understandings with Israel.”

Islamic Jihad spokesman Daoud Shihab told Al-Monitor, “The Islamic Jihad-Hamas meeting came about to affirm their unified position and to boost cooperation between the Palestinian factions.”

Commenting on the position Islamic Jihad shares with Egyptian leadership, Shihab said his group “will remain committed to [the truce] as long as Israel abides by the terms of the cease-fire reached following the recent confrontation — namely, to halt assassinations, to refrain from targeting civilians at the weekly return marches in the Gaza Strip, and to hold on to the March truce understandings between the resistance factions and Israel.”

Speaking to Al-Monitor on condition of anonymity, an Egyptian parliament member close to Egypt’s General Intelligence Service said, "The talks … did not focus on new truce understandings with Israel or on adding new terms to them. Rather, they were centered on unifying the Palestinian position toward the understandings, following the Islamic Jihad’s recent military confrontation with Israel in which Hamas was not involved.”

The parliament member said, “Egypt believes that establishing the truce understandings will pave the way for a prisoner swap between Hamas and Israel. … Nevertheless, based on the data we have, it is still too early for a new deal to be concluded."

He also noted that the talks were designed to “prevent sporadic rockets from being fired from Gaza toward Israel despite the truce." He added, "In case such a thing persisted, the entire truce would be undermined and new military confrontations between the two sides would be ignited.” Israeli Prime Minister Benjamin Netanyahu said Dec. 2, "As long as the rockets continue to be fired intermittently, no settlement with the Gaza Strip will be achieved in the long run.”

Speaking to Al-Monitor, Talal Awkal, a political analyst and writer for the Palestinian daily al-Ayyam, stated, “Egypt wanted to make available a unified position on the rules of the truce with Israel between the Islamic Jihad and Hamas, given that they are the largest armed resistance factions in the Gaza Strip. That will be reflected in the level of success of a constant truce on the ground.”

Cairo was Haniyeh’s first stop on a tour that includes several other countries. The anonymous Hamas figure explained that Haniyeh left Cairo Dec. 7 once the talks with the Egyptian officials were over, before heading to Turkey, Qatar, Russia, Kuwait and probably Iran.

Haniyeh's tour marks the first time Egypt has allowed him to travel abroad since he became head of the political bureau in 2017. Awkal believes this progress demonstrates the convergence between Hamas and Egypt.

The Hamas source said that during the visit, Haniyeh will ask Kuwait to continue pressuring Saudi Arabia to free detained Palestinians, including Hamas leaders and members.

Iyad al-Qara, an author and a political analyst for the daily newspaper Felesteen in Gaza, also mentioned the possibility of a prisoner exchange. “Haniyeh’s visit to Moscow could be focused on a new Hamas-Israel prisoner swap, as Russia is one of the few countries that have ongoing contacts with the two sides," he told Al-Monitor.