Why some members of Lebanon's diaspora returned for Independence Day

Following a speech by President Aoun in which he was interpreted as having encouraged demonstrators to leave the country, some members of Lebanon’s diaspora returned home for Independence Day on Nov. 22 to join in the protests. 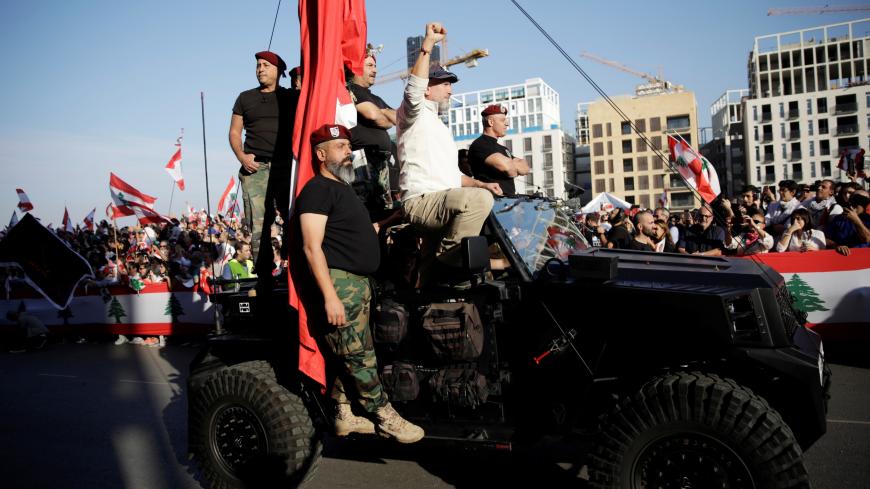 This year, the same politicians held a much more limited event Nov. 22 at the headquarters of the Defense Ministry outside the capital in Baabda.

Still, a parade downtown with military trappings that day did bring traffic to a halt. Retired veterans who headed the parade protested delays in pension payments and austerity measures introduced by the government and were cheered by demonstrators who first took to the streets Oct. 17.

Following the veterans were doctors, lawyers, students, artists, farmers and several other groups.

Joining the marchers downtown also were some fresh faces — members of the Lebanese diaspora, some pulling their suitcases behind them, who had returned to Lebanon in time to join the protests on Independence Day. Many decided to come back after hearing remarks from Aoun that seemed to encourage some protesters to leave Lebanon.

Between 4 million to 14 million people of Lebanese descent live abroad; the small country of more than 6 million has one of the largest diasporas in the world.

Many Lebanese people left during the Civil War of 1975-1990 and recently younger citizens have been emigrating due to the poor economic conditions, corruption and lack of opportunities.

However, since the beginning of demonstrations, Lebanese expatriates have been following the events from their phones overseas.

Tracy Saad, a Lebanese student currently studying in Amsterdam, told Al-Monitor, “I have been on Instagram every day, barely sleeping, just making sure everyone is safe.”

Saad participated in solidarity protests in the Netherlands over the last month — with similar ones held across the world from London to Sydney.

“We [the Lebanese diaspora] all felt a piece of us was missing. When a Lebanese person lives abroad, we don’t really connect with each other, maybe one person or two but we don’t realize how many of us are around the world. So, when we met [at the protests] we all felt we were back home for a bit,” she said.

Saad and others also reached out to people inside the country to see what they could do to help.

“There is a huge group of people from all over who have never met; I am talking to people in Dubai, England, the US and Amsterdam,” Nour Najem, a local Lebanese designer, told al-Monitor. She said, “They were ready and wanting to get involved.”

Saad, Najem and others, both in and out of Lebanon, contacted flight agents for cheap tickets and raised funds for those who could not afford a flight to Lebanon. Saad said she received over 600 emails either asking for tickets, giving donations or letting her know they were flying back.

Najem also got people to bring medicine with them. “The whole idea to help people with medicine started very simply,” Najem said. “My friend was coming from Italy and asked if we needed any medication. So I called my uncle and he said my grandma needed something, which we can’t find.”

The head of the hospital syndicate said Nov. 8 that there were only enough supplies for a month, raising concerns about the availability of over-the-counter medications. However, Najem said that after reaching out to pharmacies in the country, she found that there is still a supply of medicine but that “no one can afford it.” Najem and others are now organizing funding to try to resolve this; such efforts have been made all the easier by the help from the newly mobilized diaspora.

“The more time passes, the more ex-pats are involved; let’s face it, ex-pats left Lebanon because they lost hope,” Najem said. “When time passes and we are still here they start to feel hope again.”

She said that when people “hear a speech like Aoun’s” they also feel more invested in the protests; she was referring to the president's Nov. 12 interview in which he said that if demonstrators "see no honest people in this state, let them emigrate.”

This did not sit well with Lebanese people both inside and outside Lebanon.

“Everyone in the diaspora was crying and screaming, some nearly broke their phones,” Saad said of Aoun's remarks. She added, “I didn’t really react until a friend of mine called me in tears, she said, 'I am here alone, do they know what it is like to leave your family, to live with people who don’t always appreciate you or your culture, when your family is a video call family.’ That’s when I burst into tears.”

She added, “He told people to leave, so we are coming back,” landing in Beirut late Nov. 22.

Saad was not alone in her reaction. Nouhad, a Lebanese national who moved to Dubai five years ago and who only gave her first name, said she bought a plane ticket after the speech and was standing outside Beirut’s Rafik Hariri International Airport on Nov. 22 chanting and waving flags before heading downtown.

She told al-Monitor, “I was honestly offended [by Aoun’s speech] because I felt like I was being kicked out of my own house.”

She added that she left Lebanon “not only for money but for safety, a career. The progress I made in five years would have taken me 50 years here.”

Nouhad was joined outside the airport with locals such as Mariana, who told al-Monitor, “One of the reasons we are protesting is to bring them back here. ... My sister and my brother live abroad because of the corruption and you don't have a chance to work here if you don't know someone.”

However, there is hope that the issues that drove many Lebanese people out of the country will change, with Nouhad saying, “It feels good [to be back]; before when people asked where I was from, I used to say, 'I am Lebanese, unfortunately.' But now I say ‘I am Lebanese’ and raise my head up high; I am super proud to be Lebanese and super proud to see my people standing up for what they believe in.”