Many young Lebanese protesters forced to hide activism from parents

Young protesters are still demonstrating despite the disapproval of their parents, who cling to Lebanon's sectarian-based political system. 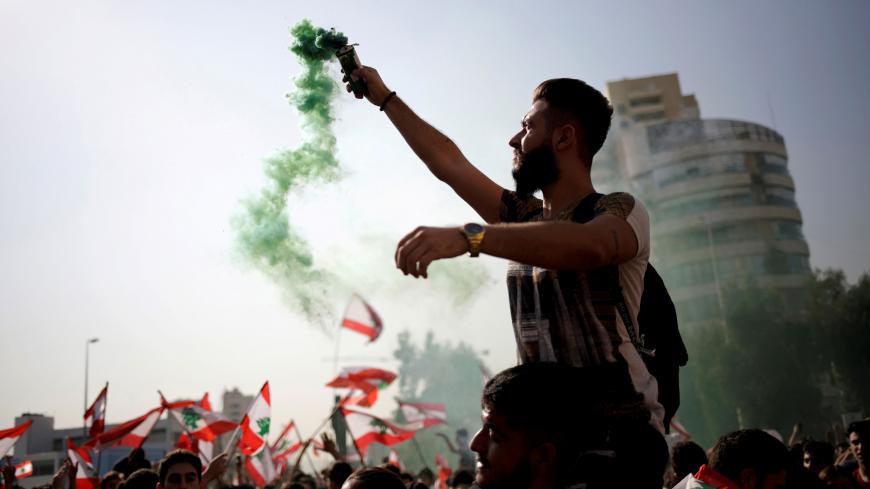 A demonstrator holds a flare during ongoing anti-government protests near the Ministry of Education in Beirut, Lebanon, Nov. 7, 2019. - REUTERS/Andres Martinez Casares

BEIRUT, Lebanon – Nour, who preferred not to reveal her full name, packed her bag with a Lebanese flag, a notebook and her wallet before heading out to join her fellow protesters at Beirut’s Martyrs Square. The demonstrations in Lebanon have been ongoing for nearly four weeks now and she has gone almost every day. She and her friends rented an office to host workshops on battling misinformation in the news media. But she never told her parents.

With hundreds of thousands of people joining the country-wide protests that call for the resignation of the entire government among other reforms, Nour finds herself in constant arguments with her parents, who wholeheartedly oppose the protests and support the current government.

“My dad is a [President Michel] Aoun supporter and one of his biggest dreams is to secure a position in the parliament,” she told Al-Monitor. “There is this big ideological division between him and me, and he wouldn’t appreciate that I’m going to these protests.”

She hides her face whenever she sees cameras during protests because she doesn't want her parents to see her on TV. At home, arguments come up almost daily on dinner table. “Look at these protesters — what they are doing is ruining this country,” Nour’s father commented while watching a live stream of protests across the country.

“I’m doing my best to topple the corrupted government that my father so vehemently defends,” Nour said.

Her story is not uncommon in Lebanon, a country that remains deeply sectarian and where religion forms many people's core identity. Different religious beliefs almost always correlate with specific political stances.

However, since the beginning of this series of protests, this ideology has been challenged. The diverse protesters are fighting back against efforts to divide them along sectarian lines. They point out that people are taking to the streets out of economic desperation and are not religious sects attacking another.

This unity narrative has reached much of Lebanon, but the generational division that has been amplified by these protests still has the power to divide families.

Rayane Raidi, another protester who relationship with her parents became strained because of the ongoing protests, told Al-Monitor that she hadn’t seen her parents in person since the beginning of the movement.

“Every time we chat on WhatsApp, we just argue,” Rayane said. “Sometimes we’d have objective and civilized arguments, but more often than not, they get extremely offensive, so I see no reason to have these discussions in person.”

“They say that they regretted sending me to a school that adopted a secular curriculum,” Rayane said, describing one of their arguments. “Because they believe the courses that I took made me go against their political opinions and ruin the country.”

But the political connotations of religious beliefs among the younger generation in Lebanon are weakening and giving way to a focus on better livelihoods. The young people of Lebanon have become the backbone of the movement that pushes the protests forward.

“I get why religions mattered to my parents that much, but I can’t put myself in the same position when all of our livelihoods are at stake,” Najeeb, another protester who also did not disclose his full name, told Al-Monitor. “I couldn’t care less about religion when I can’t find a job or put food on the table.”

However, many people in the generation who endured the 15 years of bloody civil war find it impossible to completely separate their religious affiliations from their political opinions.

The Lebanese state as we know it today reached a political balance when Sunni Muslims, Shiite Muslims and Christian Maronites agreed to a power-sharing government through the Taif Agreement signed in 1989. Since then, the prevailing belief has been that peace can only be sustained by working within the political dynamics defined by religious sects.

“This kind of close attachment people have to their religious beliefs comes from the deep fear that once their sect separates their religion from politics, they will become political minority,” Gino Raidy, an activist and blogger well known among the protesters, told Al-Monitor.

However, this mentality doesn’t resonate with the protesters on the street. They are calling in a unified voice for ditching such religion-based division.

My parents’ generation “keeps scaring people and saying if we keep protesting, this is going to turn into a civil war,” security analyst Christel Ghandour told Al-Monitor. “But they are completely blinded by the trauma from the civil war because what we are doing is exactly the opposite of what triggered the war — sectarianism.”

However, most protesters seem uninterested in tackling this division at home. A number of them interviewed by Al-Monitor said they were simply trying to avoid arguments with their parents, even if the price is to not talk to them at all.

“Too much is at stake and there is no turning back,” said graffiti artist Samir Hacker. “We are not going to stop just because our parents do not agree with us.”