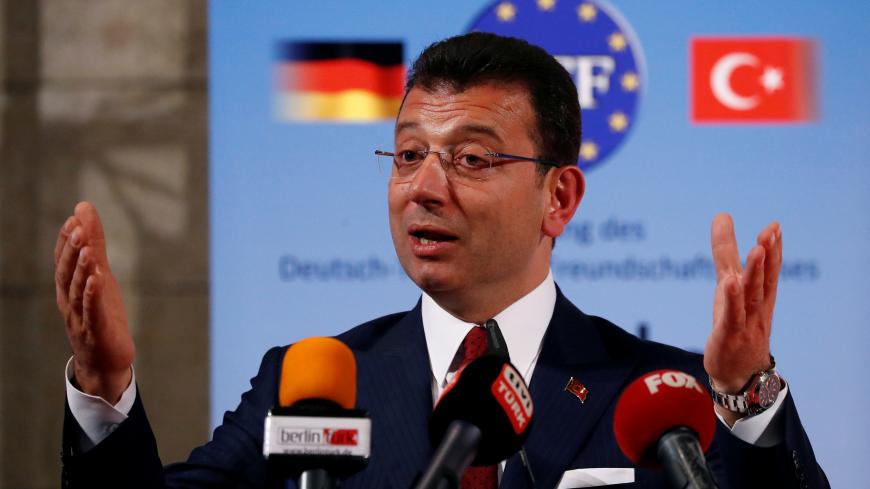 Istanbul has been forced to turn to foreign banks to find money for frozen infrastructure projects because Turkey’s state lenders have refused financing for the municipality since President Recep Tayyip Erdogan’s party lost control of the country’s biggest city, its new mayor said.

The city of 16 million people needs more 20 billion lira ($3.48 billion) to finish metro rail projects and other investments, but publicly owned banks have ceased extending even short-term credit to Istanbul and other municipalities controlled by the opposition Republican People’s Party, Mayor Ekrem Imamoglu told a news conference on Sunday.

Imamoglu has emerged as a rival to the powerful Erdogan since beating the ruling party’s candidate for mayor not once but twice after the president forced a re-run election in June. Erdogan himself launched his political career as Istanbul's mayor and his political movement controlled the city for a quarter century before Imamoglu’s upset victory.

Control of Istanbul was a major source of patronage for the ruling Justice and Development Party (AKP), which was able to hand out lucrative contracts and jobs under the city’s $4 billion budget. Imamoglu campaigned on a pledge to do away with wasteful spending, and on Sunday he blamed the previous administration’s mismanagement over the past half-decade for tripling city hall’s debt to 28 billion lira ($4.87 billion).

Taking over a city whose size exceeds most countries’ total populations from the AKP, which has dominated Turkish politics since 2002, was never going to be easy. Imamoglu has pledged to build bridges with the central government, but said his patience has run out as the city’s “urgent financing needs” are rebuffed.

“Unfortunately, all of Turkey’s state banks have shut their doors to us,” Imamoglu said. “I do not know the motivation behind the state bank’s cool stance or show of resistance — it goes beyond a banker’s motivation based on economic principles. … I’ve been patient for five months, but now I condemn these unreasonable managers’ attitudes.”

No one could be reached for comment at the state-run VakifBank and Halk Bank, and the largest state lender, Ziraat, did not respond to emailed questions. The lack of funds for municipalities may also reflect the stresses Turkey’s government-run banks face amid a sharp economic slowdown.

The banks have slashed interest rates on loans and credit cards to kick-start the economy, which slipped into recession earlier this year after a currency crisis erupted in 2018 over concerns about Erdogan’s foreign and economic policies. “They have borne the brunt of state pressure to lend to the real economy. The credit growth at state-run banks is off the charts,” Timothy Ash, senior emerging markets strategist at Bluebay Asset Management, told Al-Monitor.

Work on expanding Istanbul’s metro lines and other infrastructure projects has stalled for two years due to economic turbulence, Imamoglu said. Finishing the eight ongoing metro projects alone will cost as much as 12 billion lira ($2 billion).

So the municipality has turned to both private Turkish banks and foreign lenders to drum up cash. It most recently secured 110 million euros ($121 million) from Germany’s Deutsche Bank to restart a metro construction project on the Asian side of the city, Imamoglu said.

Imamoglu told reporters that a recent tour of European capitals including London, Paris and Berlin, where he met with investment bankers, had helped convince foreigners to open up their coffers. He also plans to visit the Far East in a bid to secure both financing and direct investment from China.

Even as Turkey struggles to attract foreign investment amid worries about a global economic slowdown, Turkey’s most affluent city — which accounts for almost a third of the national economy — still offers a good return for investors, who may also buy into Imamoglu’s political story, Ash said.

“The economics of Istanbul probably stack up really well,” he said. “People also recognize that Imamoglu is a reform story, and that’s positive. He’s perceived as a politician for the future.”

For his part, Imamoglu said he didn’t “promise anyone that I would let the genie out of the bottle. But when I told them that this was a talented city were democracy prevails, that this city has important messages for the world and that the institutional structures we have established are transparent and accountable … financial institutions were positively affected. They want to see solid documents, appropriate investments and an accurate economic road map,” he said.

The municipality could also hold initial public offerings of the companies it controls and is considering eventually tapping the eurobond market to raise more cash, Imamoglu said. That would require approval from the treasury, which is controlled by Erdogan’s son-in-law.

Erdogan has taken other steps to curb Imamoglu’s authority. The mayor said he has been excluded from a commission that would tackle municipal problems — a proposal that came from the Imamoglu himself and was accepted by Erdogan. A draft law would transfer development planning for the Bosporus Strait to the central government, newspapers have reported. Imamoglu said that plan was still hearsay but warned the government: “Such actions by a political party that has lost an election would be a great blow to Turkish democracy.”

The government’s refusal to work with his administration is “psychological,” Imamoglu said. “I understand that there’s a natural reflex after a change in administration after 25 years. But this process should not be prolonged; the government needs to work through these feelings. I believe that they will adapt.”

In the end, Erdogan, Turkey’s most popular politician, may extend a hand to his foe because of the political costs of refusing to do business with a city that is home to one out of five Turks. “I believe these relations will normalize — they have to normalize. It’s a requirement of a sound political position,” Imamoglu said.