The PA’s call for general elections seems to have gained traction in Palestine, especially with Hamas' approval for them to be held. 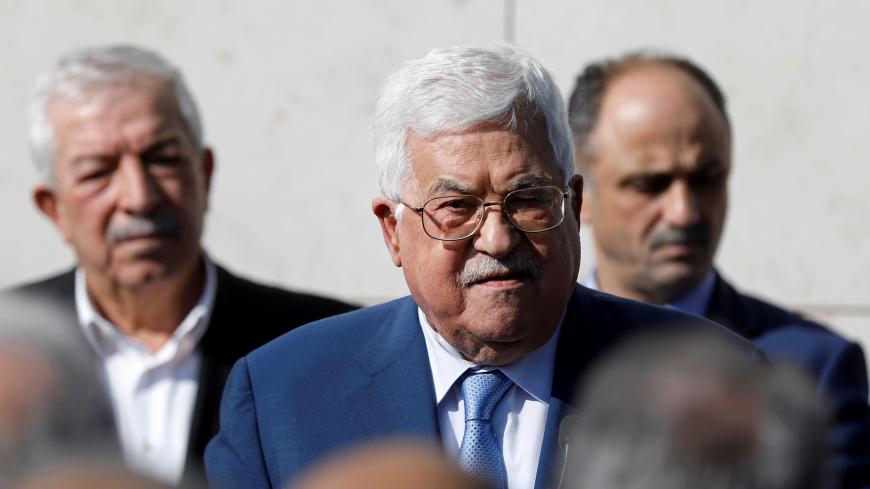 Palestinian President Mahmoud Abbas attends a ceremony marking the 15th anniversary of the death of his predecessor, Yasser Arafat, in Ramallah in the Israeli-occupied West Bank, Nov. 11, 2019. - REUTERS/Mohamad Torokman

GAZA CITY, Gaza Strip — Palestinian Prime Minister Mohammad Shtayyeh said Nov. 14 that a national consensus has been reached for holding Palestinian elections, after Hamas said Nov. 10 that it approved of holding presidential and legislative elections in the West Bank, Jerusalem and the Gaza Strip.

In a letter sent to all Palestinian factions Nov. 4, Abbas required written approvals from the factions on the seven points he put forth in order to issue a presidential decree on the date of the Palestinian general elections. The majority of the factions, including Hamas, handed over their approvals to the Central Elections Commission.

The Palestinian factions’ written approvals were sent in after visits by the elections commission delegation, which met with the different factions in the West Bank and Gaza Strip from Oct. 28 through Nov. 11, where views on the elections, technical details and procedural and legal measures were discussed.

On Nov. 26, Hamas handed over what it described as its "positive" response to Abbas' request to the commission, which was then on a visit in Gaza. In its response, Hamas set a series of conditions, namely: Legislative and presidential elections must be held within three months after a presidential decree is issued; elections must be held in all Palestinian territories, including in Jerusalem; an electoral court must be established and the constitutional court must be distanced from the electoral process; and the results of the elections must be respected and transparent.

With that, all Palestinian factions have sent their response to the commission. Meanwhile, the Lebanese Al-Akhbar newspaper reported Nov. 27 that Qatar promised the PA to financially support the elections commission by providing $25 million to facilitate its work during the electoral process.

Yahya Moussa, chairman of the Monitoring Committee in the Palestinian Legislative Council and a senior Hamas leader, told Al-Monitor that his movement has shown flexibility in order to move forward in the preparation for the Palestinian general elections. He said Hamas would like for Abbas to issue the decree in the coming days to set the date of elections.

Moussa stressed the importance of a conducive environment for the start of the electoral process in the West Bank and Gaza Strip, an atmosphere of transparency and freedom and that the 2006 election scenario not be repeated; Hamas won overwhelmingly then but the results were contested.

While Palestinian Elections Law No. 9 of 2009 stipulates that legislative elections be held every four years, the internal divide between Hamas and Fatah has prevented any such vote.

Jamil al-Khalidi, the elections commisssion's regional director in Gaza, told Al-Monitor that the commission is technically ready to hold elections and is awaiting the presidential decree to determine their date. Khalidi said the commission’s meetings with the different factions and civil society institutions in the West Bank and the Gaza Strip have bridged the gap between different views and answered questions about the elections.

Kayed al-Ghoul, a member of the Popular Front for the Liberation of Palestine politburo, told Al-Monitor that his movement has agreed to the holding of elections based on its conviction that this is a national duty and a way to rotate power and restructure the Palestinian political system. He stressed that the elections are part of several other steps that need to be taken to end the internal split and achieve political partnership between the components of Palestinian society.

Ghoul also called on Abbas to rush to convene a meeting of the general secretaries of the Palestinian factions to discuss the technical steps for the elections to ensure a fair and transparent electoral process to the satisfaction of the parties involved and the need to respect the vote results. He warned that a lack of consensus to this effect could jeopardize the process.

Ghassan al-Khatib, a former Palestinian minister of planning and head of the Jerusalem Media and Communication Center, told Al-Monitor that the written approvals for holding the elections submitted by Palestinian factions need major follow through to overcome obstacles that could hinder the electoral process, especially with regard to the party monitoring the vote in the Hamas-controlled Gaza Strip.

Khatib expressed concerns that Israel would refuse to hold elections in East Jerusalem, which would mean halting the electoral process in all Palestinian territories, as agreed to by all factions with Abbas.

Imad Ghayaza, a professor of political science at Birzeit University, called on the Palestinian Authority to exert more efforts with the EU and Egypt to pressure Israel to allow the holding of elections in East Jerusalem. He said the call for general Palestinian elections came as a result of international pressure on the PA, especially from the EU.

The EU was among a number of international stakeholders, mainly the United Nations, Qatar, Egypt and Turkey, that supported Palestinians' efforts to hold elections in order to end the internal division.

Ghayaza told Al-Monitor that the factions’ written approvals confirm their seriousness for conducting general elections and are also a prelude to creating a positive atmosphere in the West Bank and Gaza Strip for the release of political prisoners and for the freedom of political and syndicate activity.