The Turkish president received a warm welcome in Washington despite launching a military operation in northeast Syria that has upended US regional policy and defying NATO to acquire Russian weapons. 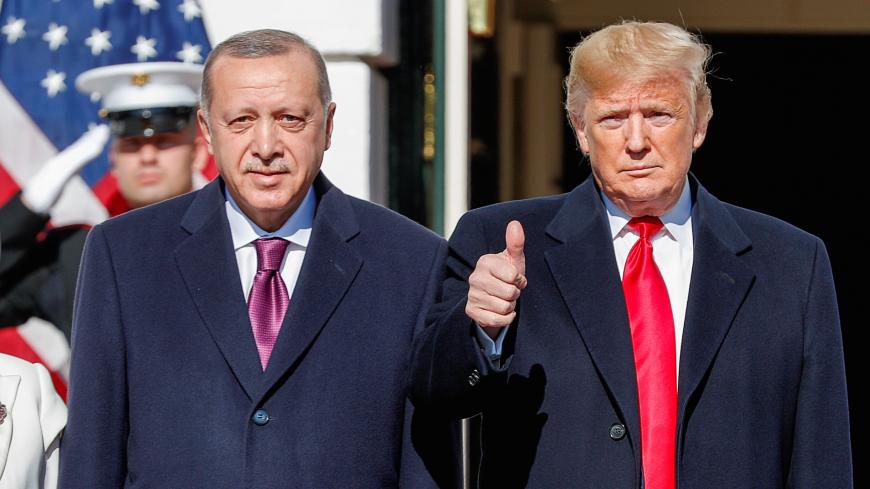 ISTANBUL — President Donald Trump is “sincerely” trying to settle a litany of disputes between the United States and Turkey despite efforts by his political opponents to destroy the relationship, President Recep Tayyip Erdogan said on Thursday, a day after clinching a meeting with the American leader at the White House.

Although neither president said they had resolved their countries’ many differences after a 1.5-hour meeting on Wednesday, Trump’s warm welcome for Erdogan during a low point in Turkey’s ties with the United States still marked a diplomatic triumph for the Turkish leader. The meeting also coincided with the first day of televised hearings in a congressional impeachment inquiry against Trump.

Erdogan outraged most of Washington, including lawmakers in Trump’s own party, by launching a military operation last month in northeast Syria to fight US-allied Kurdish militants in the People’s Protection Units (YPG). The incursion forced American troops to hastily withdraw and allowed Russia and President Bashar al-Assad to assert control over territory that Kurdish and US forces had captured from the Islamic State.

The United States and Turkey have also clashed over Erdogan’s decision to buy Russian-made missiles that NATO fears will undermine alliance security, a criminal lawsuit in New York against a Turkish state bank for allegedly helping Iran dodge sanctions and the United States’ refusal to extradite a Turkish cleric that Erdogan accuses of plotting to topple him in an attempted 2016 coup. Turkey has imprisoned Turkish staff working at American diplomatic missions.

“Naturally, we discussed the political climate in the US. I can say that Mr. Trump is sincerely trying to resolve our problems with mutual respect and on the basis of national interests. It’s important for me to say that anti-Trump circles are engaged in intense efforts to destroy our relationship,” Erdogan was quoted as telling reporters who accompanied him on the plane back from Washington.

That the meeting took place against such an acrimonious backdrop testifies to the power of the personal politics between the two leaders, both right-wing populists who have known each other at least since Trump’s foray into the Turkish real estate market in 2012. Turkish officials have said Trump genuinely admires Erdogan and has sought to emulate his style of rule, including staging public rallies when he’s not campaigning for election.

As public opinion in both countries turns against the other, distrust brews in governmental agencies and US congressional anger against Turkey mounts, all that is keeping US-Turkish ties on the rails is the friendship between their two leaders, said the Washington Institute for Near East Policy's Soner Cagaptay, who has written a new book, “Erdogan’s Empire,” about Turkish foreign policy.

“We must give this relationship credit. These two leaders share an affinity as strongman presidents; they get along well. They have a political man-crush on each other,” he told Al-Monitor. “Trump is happy that when he feels so isolated with impeachment and domestic troubles, he has his friend Recep Tayyip Erdogan come to the White House to sit around the table and smile at the cameras.”

At a news conference after the meeting, Trump heaped praise on his counterpart, describing himself as “a big fan” of Erdogan, who is a “great president.” A White house statement issued later was more sober, warning that Turkey must fix the quandary created by its purchase earlier this year of the Russian missile systems designed to shoot down NATO aircraft. “In order to achieve progress on other fronts, it is vital that we resolve the issues involving Turkey’s purchase of the Russian S-400 air defense system, strengthening our defense partnership,” it said.

But Trump is unlikely to sanction Turkey for acquiring the $2.5 billion weapons system from Moscow, Al-Monitor reported, citing a congressional committee aide. Trump has singlehandedly helped Turkey evade what are supposed to be automatic economic penalties legislated by Congress for buying the Russian weapons.

Erdogan told reporters traveling with him that Turkey could buy the rival Patriot system from the United States if it offers them under “suitable conditions,” but it will not give up its Russian missiles.

“In buying the Patriots, [a demand to] completely remove the S-400s is an imposition on our sovereign rights and we find it absolutely inappropriate,” he said. “Diversifying our sources of defense is a necessity for our national security and our sovereign rights. We see the S-400s within our defense systems as important.” He added that Turkey will not undermine its strategic relations with Russia.

Erdogan may have offered to keep the S-400s packed in boxes to help Trump block sanctions and reinitiate the sale of the Patriots, but he first has to convince Russian President Vladimir Putin, Cagaptay said, adding, “The Erdogan-Trump meeting will be finalized when the Erdogan and Putin meeting takes place. … Putin wants a rupture in NATO because of Turkey’s purchase of this system [and] to sow discord within NATO, so Putin may not let Erdogan go so easily.”

At Wednesday’s press conference, Erdogan chastised critics of his military operation in Syria as well as US lawmakers for passing a bill on Oct. 29, Turkey’s national day, that recognizes as genocide the killing of up to 1.5 million Armenians during World War I by Ottoman Turks. That measure was accompanied by another bill to sanction Erdogan personally for invading northeast Syria, causing civilian casualties and threatening global security by potentially reviving the Islamic State.

“Certain circles that cultivate sympathy for terrorist organizations are unhappy and are attempting to muddy public opinion with disinformation and ruin our relations,” Erdogan said. “They even try to distort historical matters and create new problems to dynamite our ties. I shared with the president that the House of Representatives’ decision serves this exact purpose, has injured the Turkish people and is an effort to cast a shadow over our relations.”

Erdogan told reporters on the plane that Trump was “deeply affected” after watching a video prepared by the Turkish presidency of purported YPG wrongdoing, while the five Republican senators in the Oval Office with them “viewed it differently” because of their sympathy for Kurds. The lawmakers found the video to be “straight propaganda” and “unpersuasive,” according to news reports.

But Erdogan apparently did sway Lindsey Graham on the genocide bill. The Republican senator, who vacillates between defending and voraciously slamming Turkey, said late on Wednesday he would block the legislation.

Graham also reportedly joked about Turkey’s dismal press freedom record at the press conference. (Turkey is the world’s top jailer of journalists, and 90% of the media is under the government’s direct control or run by companies close to Erdogan.) When Trump called for “only friendly reporters” from the Turkish side to ask questions, Graham said in an aside to an American journalist: “There aren’t any others left.”

Erdogan then picked Hilal Kaplan, an outspoken supporter of the president in her columns for Sabah newspaper, which is run by Erdogan’s in-laws. She asked a question that mirrored Turkey’s official position on the Syria incursion, prompting a visibly annoyed Trump to say, “You’re sure you’re a reporter? You don’t work for Turkey with that question?”