Both Turkish and Syrian civilians were reported killed as Turkey pressed a cross-border assault on a Kurdish militia and President Recep Tayyip Erdogan struck a defiant tone in the face of international criticism. 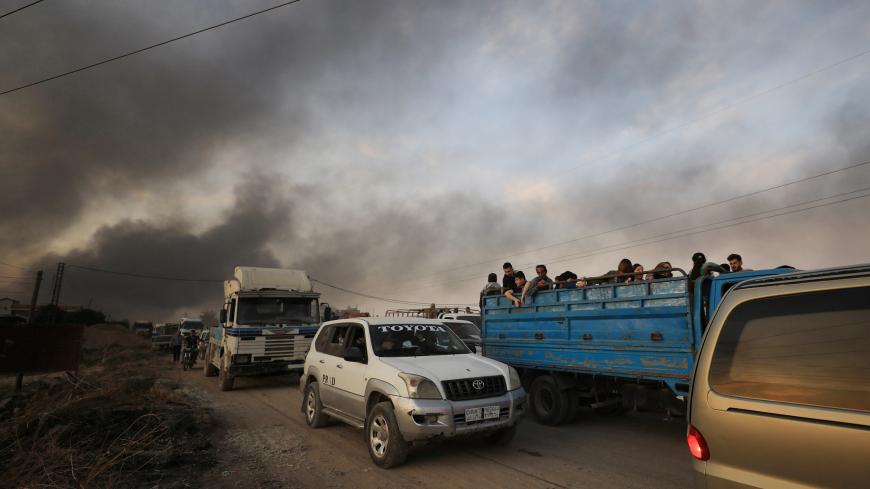 ISTANBUL — Turkish artillery pounded Kurdish militant targets in northern Syria for a second day on Thursday, with both sides reporting civilians were killed, and President Recep Tayyip Erdogan slammed Western nations for failing to support the incursion into a neighboring country.

Turkey’s attack on a roughly 120-kilometer (75-mile) stretch of Syrian territory south of its border has sparked an international backlash, with the United States — which has supported the Kurdish-dominated Syrian Democratic Forces (SDF) for half a decade in the fight against the Islamic State — threatening economic sanctions and the European Union demanding Turkey halt the military action or risk unleashing more turmoil in the region.

An infant and an employee at a tax office were killed by mortar fired launched from Syria that hit two Turkish towns on the border, the provincial governor said in a statement. More than a dozen other civilians were wounded when shells struck a total of four towns, reported the Anadolu news agency.

Across the border, the Kurdish Red Crescent said seven civilians were killed. The Syrian Observatory of Human Rights said more than 60,000 civilians have fled the fighting and put the death toll of SDF fighters at 23. Erdogan said 109 SDF militants had been “neutralized” and denied Syrian civilians had perished. The Defense Ministry reported no Turkish soldiers had died.

Turkish forces have struck more than 180 targets and sent ground troops across the border, forcing the SDF out of seven villages around the Syrian towns of Tell Abyad and Ras al-Ain. Witnesses said the Turkish armed forces continued to rain artillery shells on border towns a day after launching the offensive, dubbed Operation Peace Spring, on Wednesday to beat back the SDF from the Turkish border.

The SDF runs a large swath of northeast Syria after capturing the territory from the Islamic State, backed by American firepower. The collaboration has outraged Turkey, which sees the militia as an extension of the Kurdistan Workers Party (PKK), listed as a terrorist group by Turkey, the United States and the European Union for its three-decade insurgency in southeast Turkey that has killed more than 40,000 people.

The United States and Turkey agreed in August to jointly patrol a buffer zone free of the SDF, but Erdogan had grown increasingly frustrated that US forces continued to cooperate with the Kurdish fighters and persuaded President Donald Trump on Sunday to let him attack.

European governments as well as Israel, Iran, Saudi Arabia and Egypt are among those objecting to Turkey’s unilateral incursion. Erdogan accused the EU and NATO of disloyalty and reiterated his threat to “open the gates” so that 3.6 million Syrian refugees living in Turkey could storm Europe if Brussels defined his operation as a military occupation.

“Underlying our cross-border operation is preventing a terrorist state from being established to our south,” Erdogan said in a speech to ruling party officials. “We are a member of NATO. You have no right to remain silent when these terrorist organizations attack Turkey. … We can’t just say, ‘Fine,’ if you are going to choose a handful of punk terrorist groups over Turkey.”

Yet Erdogan held his fire against the United States, despite a tweet from Trump this week that he could “obliterate” the Turkish economy and plans by members of the Senate to severely sanction Turkey for attacking the YPG. The two presidents are due to meet next month in Washington.

Trump has vacillated between support and criticism of the Turkish invasion. Erdogan was only able to launch the assault after the American leader withdrew US special forces from the area now under bombardment and he has criticized the Kurds (including a bizarre rant about how they had failed to fight in World War II). However, anger among Republican lawmakers for reneging on an American promise to protect the Kurds has also prompted Trump to warn Turkey against crossing limits that he has not elucidated.

Erdogan has said Turkey wants to control a "safe zone" 400 kilometers (250 miles) long and 30 kilometers (18 miles) deep within Syria just south of its border where he can dispatch up to 2 million Syrian refugees. But the relatively small scale of the operation so far indicates Turkey is first seeking to secure its border before expanding the offensive to gradually take more territory, said Hasan Selim Ozertem, an independent political analyst in Ankara.

“At the beginning they will try to control a 120-kilometer [75-mile] length borderline, with Tell Abyad as one of the main milestones … with a depth of five to 10 kilometers [three to six miles], and will then try to move to the east or west,” he said. “The Turkish army will be opening up pockets with smaller groups [of soldiers] and then will join them together later.”

The SDF is outgunned and outmanned by the Turkish military, NATO’s second biggest, and the fighters appear to be withdrawing to areas they can more easily secure, he told Al-Monitor. “It’s not total war,” he said. “They know that a harsh countering of the Turkish army will end with total destruction.”

Until now, the SDF has largely avoided confrontation with Turkey, even after Erdogan’s peace talks with the PKK collapsed in 2015. Some analysts questioned why the United States failed to encourage a resolution between Ankara and the Kurdish militants when it had the chance.

“There’s no hiding" the YPG’s connections to the PKK, "but the PKK launched its Syrian affiliate to focus on Syria & to operate in line with [Kurdish] needs in Syria," tweeted Aliza Marcus, author of “Blood and Belief,” a history of the PKK. She explained that for years, the group has focused on "governing & providing [for] civilians while deliberating seeking peace with Turkey."

She said that any legitimate concerns in Turkey “could have been answered [through] negotiations," adding that the United States should have pushed Ankara to open direct talks or resume the peace process and concluding, "The answer isn’t [to] back a Turkish invasion.”

Back in Turkey, the authorities are seeking to rein in dissent. A prosecutor has opened an investigation into five parliamentarians from the Peoples’ Democratic Party, whose base is overwhelmingly Kurdish, for their criticism of the assault. Among those accused of spreading terrorist propaganda and insulting Erdogan’s government are the party’s two leaders.

Police are taking legal action against 78 people who questioned the operation on social media. Two journalists for leftist news outlets were detained after tweeting about the operation. One was released while the other remains in custody.

But the incursion has the backing of most Turkish political parties in a country where a large majority of citizens are proud of their military’s prowess and blame Kurdish nationalism for the long war in the southeast. Still, the lack of international backing left Erdogan sounding wistful.

“Historical realties show that we have no other friends but one another; we have no one but each other to lean on,” Erdogan said in his speech.