Turkey had seven net gains and six net losses from its two-week Operation Peace Spring against the Syrian Kurdish groups. 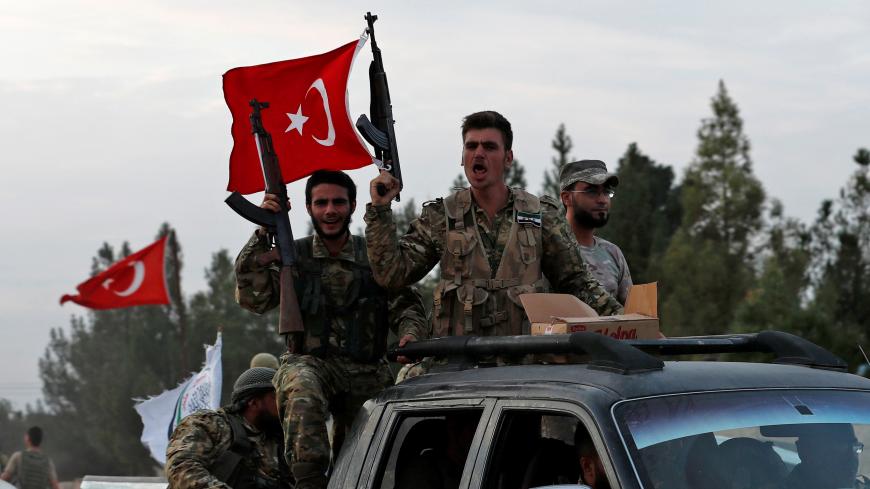 Turkey-backed Syrian rebel fighters drive on top of a truck to cross into Syria, near the border town of Akcakale in Sanliurfa province, Turkey, Oct. 17, 2019. - REUTERS/Murad Sezer

Turkey's gains from Operation Peace Spring in northern Syria are greater than its losses.

The Turkish Defense Ministry announced after an Oct. 22 meeting between the Russian and Turkish presidents in Sochi that a new operation in northern Syria was not needed and that Turkey's two-week Operation Peace Spring had concluded. A post-mortem is now needed, as well as a discussion on what comes next militarily and diplomatically.

Was the operation's political objective achieved? According to Turkish decision-makers, the operation had two political goals. First, Turkey sought to control the terrain stretching from the northeastern Syrian town of Kobani to the Iraqi border and create a safe zone 30 kilometers (18 miles) deep. Second, Turkey aimed to eliminate the military capacity of the Kurdish People’s Protection Units (YPG), an offshoot of the Kurdistan Workers Party (PKK), which Turkey and other Western powers consider a terrorist organization. Turkey currently controls the land between Tell Abyad and Ras al-Ain stretching to the strategic M4 highway in the south. The size of the area under Turkish control amounts to some 20% of Turkey’s goal.

According to data provided by the Turkish Defense Ministry, Turkey has neutralized some 702 militants, comprising about 1% of 70,000 YPG militants.

Some important points emerged following head-spinning diplomatic traffic in the past weeks, beginning with US Vice President Mike Pence visiting Turkey a week ago and ending with a summit between Vladimir Putin and Recep Tayyip Erdogan in Sochi. The important points are:

What are Ankara’s net gains after the operation and the Sochi summit?

Erdogan's political gains can be summarized as follows:

What about Ankara’s net losses?

Where to from here? The military situation, apart from Idlib in the north and Deir ez-Zor in the south, is static. No large scale military action is expected.

However, there are still some unknowns, including: How will Assad’s forces take over border security from the YPG? How will Turkey-Russia joint patrols be conducted? And can Russia permanently maintain three or four battalions east of the Euphrates?

What will be the future status of the YPG’s 70,000 members? Will they be incorporated into the Syrian regime army, become an autonomous force or be demobilized? Will they be used under Russian sponsorship to fight the Islamic State? Or to restrict the pro-Iran and pan-Shiite militias that so bother Russia and Assad? The YPG could also be used to impose control over the Turkey-backed FSA factions that, to varying degrees, possess jihadi ideologies.

Will Ankara accept the Russian guarantee of preserving the YPG's military strength, or will it insist on disarmament?

More importantly, what is Russia’s vision for the Kurds in Syria and at a regional level? Russia, unlike the United States, was careful not to establish military ties with the YPG, but will it maintain this policy?

Will the PKK’s leadership remove YPG commander Mazlum Kobane? Kobane gained enormous sway through his recent contacts with Trump and Russian Defense Minister Sergei Shoigu. The PKK would probably like to remind everyone who is the real boss. Will the YPG extract itself from PKK domination and become a rival group in Rojava?