The Aramco attack and the rise of nonstate actors

The attack against Saudi Arabia's Aramco facility points to a crucial change on how one traditionally understands armed conflict in the Middle East. 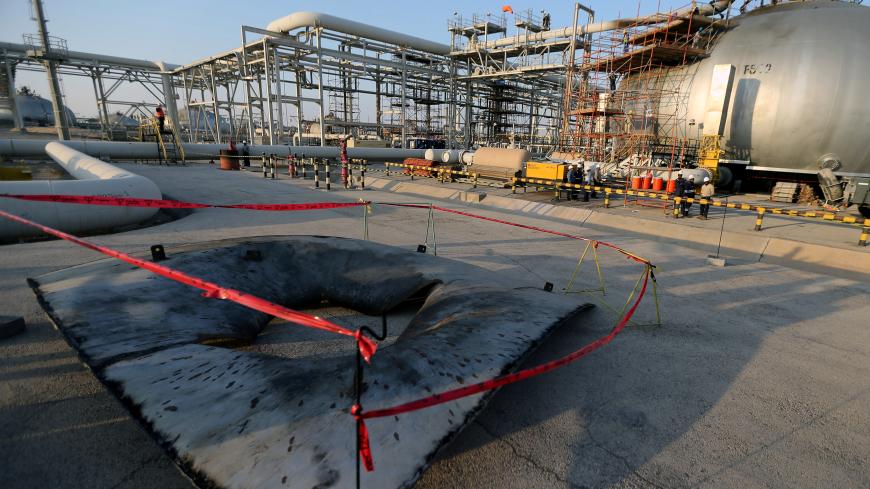 In the early hours of Sept. 14, a bizarre attack, the perpetrator of which is still officially unknown, hit at the heart of Saudi Aramco, the company that earns over half of Saudi Arabia's annual gross domestic product.

This drone-supported cruise missile attack not only demonstrated just how vulnerable Saudi Arabia, the world's largest oil exporter and the country with the highest defense spending per capita in the world, is to an asymmetric attack as such, but also shockingly revealed how a violent nonstate actor, if equipped with sophisticated military technology and expertise, can have an impact. No matter who the suspects — say, Iran-backed Houthi rebels in Yemen or Iran-backed proxies in Iraq — an analysis of the attack and its aftermath points to crucial changes on how armed conflict in the region is traditionally understood.

The characteristic of the attack that made it so unusual is that although the targeted oil facility was a strategic military target, it was badly damaged through the use of a simple tactical design.

If the harm inflicted on Aramco targets had been done by a country’s task force of warplanes, it would be a “casus belli” — a reason for war. That is, the United States and Saudi Arabia would have definitely responded with a counter air attack. But when the perpetrator is not firmly identified, strategic numbness prevails. Saudi Arabia and the United States have been passive in the attack's aftermath, while also saying Iran is to blame.

The Aramco strike shows how violent nonstate actors can procure armed drones and cruise missiles and use them effectively.

International watchdogs note that more than 70 countries have cruise missiles and nearly all of them are working very hard for modification of those missiles. Currently, armed drones of more than 20 countries have been widely used in military operations. Those numbers are rapidly increasing as sellers, particularly China, introduce the drone technology into the world arms market and, more importantly, the unmanned aerial vehicles are becoming cheaper. Today anyone with a few hundred thousand dollars can easily build an armed drone squadron that can be effective in 20-30 kilometer (18-25 mile) range while someone with tens of millions of dollars can do the same for a squadron that can operate in 100-150 kilometer (62-93 mile) range.

Experts had been predicting an upsurge in such drone use since the summer of 2014 after seeing the sophisticated utilization of armed drones by the Islamic State.

According to Russian officials, Syrian rebels are launching on average 20 drone attacks per week toward Russia’s critical Khmeimim air base in Syria. Drone attacks have become most encountered threats the Saudi army faces in Yemen.

Nonstate actors in the region seem to have embraced drones, which enable effective attacks to be launched at low cost and low risk.

State actors appear to be unaware of how to prevent access to drones and how to stop attacks made by aerial vehicles.

“Middle East countries have become a useful testing ground. It appears that Israel, Iran, Turkey and Arab countries are likely to be frequent targets of such attacks,” Ozen added.

This in turn means that from now on, confrontations between a state and a violent nonstate may not take place purely on the ground but very well may involve multi-domain battle. Violent nonstate actors now have air capabilities and states will have to acquire low-, medium- and even high-altitude air and ballistic defense capabilities against them. Of course, cyberspace shouldn’t be ignored as well as the saga of the Aramco attack and Saudi Arabia’s failure in preventing it has become serious propaganda material on the internet, mostly in social media.

Another unusual feature of the Aramco attack was its first-ever application and the surprise it created. To be sure, surprise is a principle of war, but such an unexpected attack prompted by a bright idea made Saudi Arabia’s multibillion dollar air defenses ineffectual.

Ozen said that previously, nonstate actors could have used drone attacks in a 5- to 30-kilometer (3- to 18-mile) range but the Aramco attack showed the possibility of their acquiring a capability of attacking, from a 500-600 kilometer (310-370 mile) range, strategic targets deep inside enemy states.

“In the Aramco attack, the most likely range was 600 kilometers. A strategic target was struck with tactical ability. This success that cannot be achieved so easily in a conventional war has created both a new opportunity as well as the need to be on guard to the utmost,” Ozen said.

Another characteristic of the Aramco attack was that it was the first successful application of drone (or drone and cruise missile) swarming, a tactic aiming to maximize target saturation, and thereby overwhelm or saturate the defenses of the principal target. The attack was so multipronged and happened so quickly that Saudi Arabia, which does possess counter capabilities, did not even find a way to respond.

The most prominent lesson learned from the Aramco attack is that there is no more easy military victory for state actors in their confrontation with violent nonstate actors. This will require the state actors to think twice before intervening militarily in other countries.

Saudi Arabia’s Operation Decisive Storm, which it launched for an easy victory in Yemen, has been going for more than four years. Violent nonstate actors that are weaker asymmetrically are able to adapt to new situations; indeed, in the long run, violent nonstate actors seem to be able to get the upper hand by simply not being defeated. If these actors have armed drones, cruise or ballistic missiles and also have skills involving cyberspace and hacking, the conflicts can become costly on financial and political terms for state actors.

President Donald Trump, who has a reputation as a warrior leader, knows all this; could he be taking a softer military posture against Iran as a result? For Trump, whose most-uttered foreign policy goal is to bring American soldiers home from Afghanistan and the Middle East, a military intervention in Iran would mean a new military surge and perhaps the beginning of a new military engagement, as was the case with Iraq in 2003.

I am sure Tehran is so relaxed because it knows this restraint on Trump so well.