Why Syrians in Jordan refuse to return home

Not many Syrians have returned from Jordan since the Nassib-Jaber border crossing was opened last year, for fear of military conscription and arrest by government forces. 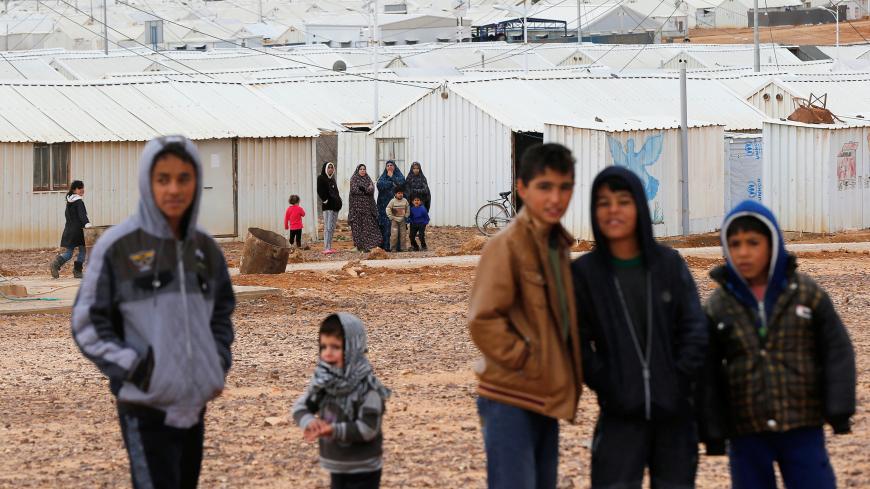 Syrian refugees look at the camera as they stand in front of their homes at Azraq refugee camp, near al-Azraq city, Jordan, Dec. 8, 2018. - REUTERS/Muhammad Ham

ALEPPO, Syria — Although the Nassib-Jaber border crossing between Syria and Jordan opened Oct. 15, 2018, the number of Syrian refugees returning home from Jordan remains low. This has sparked questions about the reasons preventing their return to their hometowns in southern Syria, as the battles between the opposition and government forces have ended and calm has been restored following reconciliation agreements under direct Russian brokerage since mid-2018.

The Jordanian Ministry of Interior released a statement Sept. 17, which Jordan's Ammon News published, saying that 153,000 Syrians entered Syria through the Nassib-Jaber border crossing since its opening mid-October 2018, and that 33,000 of them have refugee status. The rest are Syrian nationals who entered Jordan to visit their relatives and then returned to Syria, and also traders and Syrians living in Jordan since before the 2011 revolution broke out, who do not have refugee status in Jordan.

The ministry reiterated that “Jordan is commitment to the voluntary return principle for Syrian refugees and its facilitation of the needed measures for them to leave Jordan.”

Ayman Abo Noqta, a media activist from Daraa in southern Syria, told Al-Monitor, “The figure that the Jordanian Ministry of Interior mentioned in its statement includes all Syrians who entered through the crossing, and many of them came from Syria to visit their relatives in Jordan. The number of refugees returning to Syria — which the statement said amounted to 33,000 — is exaggerated and exceeds the estimates of the UN High Commissioner for Refugees in Jordan. The UNHCR said that 20,000 refugees returned from Jordan to Syria since border opening.

He said, “Opening the Nassib-Jaber border crossing encouraged many Syrian refugees to return to their hometowns and houses in Daraa. But the Syrian government forces arrested hundreds of refugees after returning home, which scared the refugees. Consequently, those who wanted to return changed their minds for fear of facing a similar fate.”

Abo Noqta added, “Other reasons demotivated refugees from returning, including the deteriorating living conditions in southern Syria and the lack of electricity, health care facilities and potable water in their cities and towns of origin, such as Daraa and Quneitra, not to mention the devastation of their cities and villages. Many refugees do not have the financial means to restore their destroyed houses, if they choose to return. For that reason, they would rather remain in Jordan for now. Besides, unemployment and lack of job opportunities are discouraging Syrians to return, as the Syrian government has not taken any serious, reassuring and encouraging steps.”

According to the UNHCR, there are 666,596 registered Syrian refugees in Jordan. But Jordan claims it hosts 1.3 million Syrians, which includes those who fled the war and those who already lived in Jordan before 2011.

UNHCR Jordan spokeswoman Lily Carlisle told The Jordan Times July 5 that 20,000 Syrian refugees returned home since the crossing opened, including 14,000 who returned in 2019. The UNHCR reported that many Syrian refugees in Jordan prefer not to return to Syria because of the conscription risk for Syrian men, not to mention the lack of services and opportunities.

Ahmad Amar, a civil rights activist from Daraa, said that most Syrian refugees in Jordan live in cities instead of refugee camps such as Zaatari, Azraq or Emirati-Jordanian Camp (also known as Mrajeeb al-Fhood).

Amar told Al-Monitor, “Most refugees in Jordan do not want to return. They are poor and cannot live in Syria amid the rubble and lack of services and opportunities. Refugees in Jordan manage to make ends meet, but if they return to Syria they will not be in a better situation. They cannot trust the government forces and its security apparatus that does not miss any chance to retaliate against these modest citizens.”

Amina Haurani, a refugee teacher who lives in Irbid, told Al-Monitor, “We cannot return home under the current security situation in Hauran. All the refugees I know who returned regret it. They have no access to basic services, gas or electricity. Their houses are destroyed and there are no jobs.”

Civil activist Ahmad Majaresh who lives in Amman told Al-Monitor, “Jordan is one of the countries that was impacted by the Syrian refugee wave since the 2011 Syrian revolution broke out. The Syrian government and its Russian ally are trying to repatriate Syrian refugees living in Jordan, because their reluctance to returning after the battles desisted and supposed calm returned to their towns embarrasses the government and its allies. The latter want refugees to return to tell the international community indirectly that southern Syria is in the hands of the government and its allies and that stability has been restored.”

Majaresh added, “Fear of conscription in the Syrian army is the most worrying for Syrians in Jordan and is delaying their return. Families are concerned for their children and would rather they stayed in Jordan. Most returning refugees are old, but the youth do not consider returning for fear of arrest and conscription.”

Abu Mohammad Yassin, a civil activist and refugee who lives in Azraq camp, told Al-Monitor, “The Syrian government and its Russian ally have been trying to repatriate refugees since the crossing was opened. They tasked people and associations with helping whoever wants to return and have been covering the embassy expenses or helping refugees solve their problems at the Syrian Embassy in Amman. Many refugees returned in the first few months after the crossing was opened. However, the numbers gradually dropped and practically stopped four months on, when Syrian visitors came to Jordan to see their relatives and told them about the security hazards of returning, the arrests and youth conscription, the lack of services and the tough living conditions in their towns in Daraa and Quneitra provinces.”