Residents of the village where Islamic State leader Abu Bakr al-Baghdadi was staying spoke to Al-Monitor about what happened on the night of his assassination. 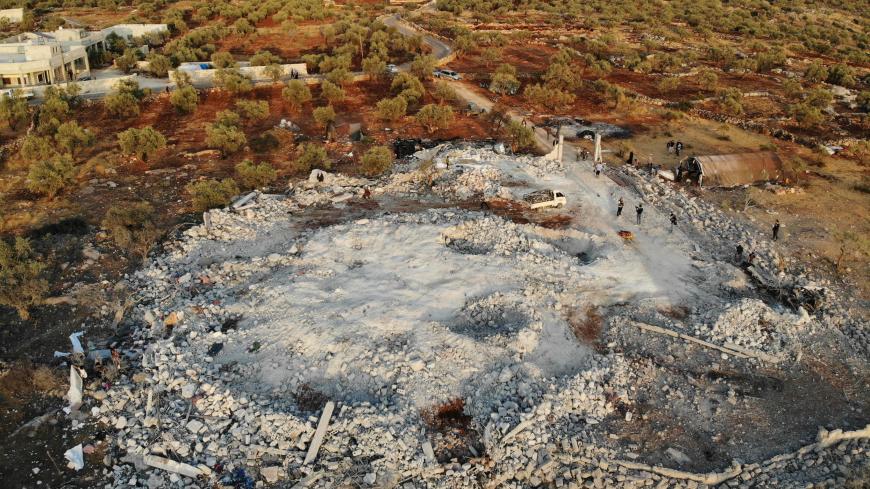 An aerial view shows the site of a US operation in Barisha, Syria, Oct. 27, 2019. - OMAR HAJ KADOUR/AFP via Getty Images)

The sound was confusing, but then grew clearer. “It was not a single helicopter, but several. The sky was dark, nothing was clear up there. The sound got closer and louder. It seemed that the helicopters were very near.”

Abu Ahmed’s heart pounded and he grew increasingly tense as he wondered who sent them. “Is it the Syrian regime, Russia or Turkey?” He never imagined that the eight helicopters were on a “dangerous” and “daring” US nighttime raid, as described by US President Donald Trump, to assassinate the leader of the Islamic State, Abu Bakr al-Baghdadi.

The following morning, Al-Monitor went to the scene: a small, remote village called Barisha, located 26 kilometers (16 miles) north of the city of Idlib and only 6.5 kilometers (four miles) from the Syrian-Turkish border.

The house where Baghdadi lived was 600 meters west of the village. The residents directed us to an unpaved secondary road to reach it. We knew we were close when we saw a charred passenger car on the side of the road.

At the site, everything was leveled except for the remains of a wall and two concrete columns. The house was completely destroyed, with two rocket holes in the middle of the rubble.

The rubble was next the wreckage of a car and the remains of a motorcycle. Next to the ruins of the house, there is a spacious tent and another small one. Olive trees surround the place.

Dozens of residents and journalists were inspecting the scene. Residents chatted about what they saw and heard the previous night.

Abu Ahmed told Al-Monitor, “After we heared the sound of the helicopters, machine guns started shooting at the helicopters, and they returned fire. This lasted for about half an hour. Then soldiers descended on ropes from helicopters. I heard someone speaking in Arabic through loudspeakers, saying, ‘Abu Mohammed Salama, surrender yourself! Abu Mohammed Salama, surrender yourself!’ They broke into the house after bombing the wall with a bomb or an RPG.”

Abu Mohammed Salama is the owner of the house where Baghdadi was sheltered. The inhabitants of the village thought Salama was a civilian working in the food industry. They told Al-Monitor he was displaced from Aleppo three years ago and built his house here.

Satellite imagery shows that the house was constructed in late 2017.

In small villages like Barisha, villagers are usually very close and visit each other often. But according to Abu Mohammed, “No one has ever visited Abu Mohammed Salama’s house. They merely greeted him when they saw him on the street.”

He continued, “After the soldiers stormed the house, sporadic clashes and shooting continued until 2:30 pm. Then it was calm.”

The Pentagon announced Oct. 28 that US forces detained two men during the operation who are now in “a secure facility.”

Neither the villagers nor the local press knew what was going on or who the attacking force was. At 3:23 a.m., Trump tweeted, “Something very big has just happened!”

Village resident Abu Sadiq, also a pseudonym, arrived at the site at 4:30 a.m. He told Al-Monitor, “After it was calm, the planes left the skies and I headed to the scene. There was a car burning, and next to it were the bodies of two men, neither of whom looked like Baghdadi or the owner of the house, Salama. ”

Medical sources estimated the death toll at seven, including three men, three women and a child.

Confirming Baghdadi’s death in an Oct. 27 press statement, Trump said Baghdadi “reached the end of the tunnel as our dogs chased him down. He ignited his [explosive] vest, killing himself […] His body was mutilated by the blast. The tunneled had caved in on it in addition.”

According to Pentagon sources, two of Baghdadi’s wives also killed themselves by detonating their explosive vests.

“When I reached the house, a group of villagers and ambulance teams were already there,” said Abu Sadiq.

A shepherd living in one of the tents near the house told Al-Monitor US soldiers handed him three children who had been evacuated from the house. He said they asked him to take them and his family a safer distance of one kilometer away.

“They told me I could return to my tent after the sound of three airstrikes,” he said. “The soldiers gave me an electric light so that airplanes would not target me.”

According to residents of the village, Hayat Tahrir al-Sham, which controls the area and sees the Islamic State as an enemy, detained the shepherd and the three children to interrogate them. The group has arrested several IS cells in Idlib, most recently on June 23.