Iranian Central Bank governor Abdulnaser Hemmati speaks in-depth about the re-imposition of US sanctions on his country, the unprecedented plunge of the rial and more. 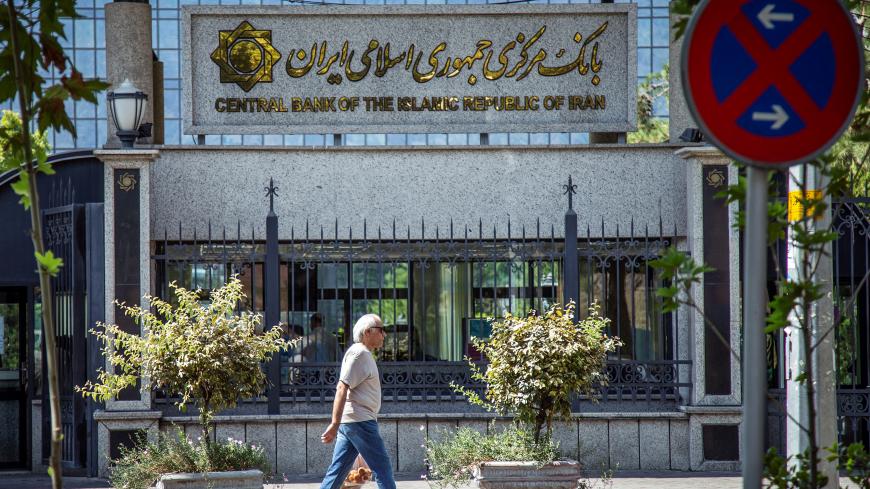 In an exclusive interview with Al-Monitor, the governor of Iran’s Central Bank, Abdulnaser Hemmati, said he has been able to strengthen the Iranian rial by 40% since the onset of new US sanctions in 2018 that led to the currency's free fall.

Commenting on INSTEX, a financial mechanism set up by Britain, France and Germany to facilitate Iranian trade in light of US sanctions, the Central Bank chief voiced his pessimism, stating, “I have come to the conclusion that the issue is not with INSTEX and its mechanism. The issue is that the Europeans seem to need US approval for their plans.”

Asked about the destiny of a $15 billion credit line proposal from the French, he answered that “it depends on the Europeans and the United States to work it out.”

The following is a transcript of Al-Monitor's interview with Hemmati, who was named as Central Bank governor in July 2018, coinciding with some of the worst days faced by the Iranian economy after the reimposition of US sanctions. It has been edited slightly for clarity.

Al-Monitor:  Following the re-imposition of US sanctions, Iran's rial plunged unprecedentedly, with one dollar currently being traded at about 20,000 rials. Some also attributed the rial’s plunge to mismanagement. What role did sanctions play in the devaluation, and what can be attributed to mismanagement?

Hemmati:  In my view, the exchange rate depreciation was mostly rooted in the expectations surrounding US sanctions. That being said, the restrictions imposed on the market during the unification of the [official and open-market] rates at 42,000 rials for one US dollar, which happened around the same time as the renewal of US unilateral sanctions and [Washington's] withdrawal from the JCPOA, also played a role. These two things, among other factors, led the exchange rate to depreciate. I can add to these factors the spillovers of sanction shocks, [US President Donald] Trump's relentless war of words about cutting Iran’s oil exports to zero, and the US' unilateral attempts to cut off our banking system from the rest of the world. Added to all of this, a number of US-backed media outlets were actively running misleading reports about the future of Iran’s economy, claiming that the exchange rate would free fall to 300,000 or 400,000 rials [to the dollar].

On the technical front, we had some issues too. We were lacking technical and software capabilities to monitor foreign exchange transactions for a period of time when the foreign exchange bureaus were shut down, and it took us almost two months to restore this key part of the market. We also lacked an integrated software system that would connect the banks and foreign exchange bureaus, preventing us from effectively monitoring the system and circumventing speculations. With the gradual weakening of the Central Bank supervision on [point of sale] terminals and banking transactions, everyone could transfer any amount using a debit card and a point of sale terminal, not only in Tehran but in Herat, Afghanistan; Sulaimaniyah, Iraq; Istanbul, Turkey; and Canada. This was unacceptable, and we mostly put an end to these practices.

Al-Monitor:  At the time of the currency's fall, there were some unofficial reports in Iran about the role of the United Arab Emirates in rial depreciation, as it was whispered in political circles that Abu Dhabi had closed down Iran’s exchange stores. Do you think the UAE played a role in the rial's depreciation?

Hemmati:  I also heard about these rumors. Some were also claiming that Saudi Arabia intervened in the foreign exchange markets in Sulaimaniyah and Herat. These were mere rumors, but the fact was that the UAE did, in fact, put restrictions on private Iranian foreign exchange bureaus as well as Iranian accounts in UAE banks. However, I have recently heard that some of those restrictions have been lifted, which is something that we, as neighbors, expect our neighbors to do.

Al-Monitor:  ​The rial’s plunge and liquidity growth have sent inflation soaring. What steps are being taken to address this?

Hemmati:  In the past few decades, the average growth of liquidity was around 20-23% [annually]. Therefore, the current liquidity growth of 23-24% is not a new issue. In my view, the key factor behind inflation was the exchange rate depreciation, which pushed up the prices of imported goods, including basic commodities and durable goods. Rising inflation continued until March 2019. Since then, we have seen that inflation is cooling off, which is evident in recent monthly inflation rates. Once we successfully curbed exchange rate depreciations, we were able to rein in inflationary pressures. As you well know, at the height of the recent sanctions, one US dollar was traded at around 20,000 rials. Today, it is about 11,400 rials, which translates into an almost 40% appreciation. We will continue to see further easing of inflation in the coming months. I must add that we are planning to apply a tool to manage liquidity, namely through open market operations. This is something that most central banks do, and we will also use it to the full extent.

Al-Monitor:  Is there a gradual process in place to unify the black market and official exchange rates?

Hemmati:  What you are talking about is the process to integrate the “cash” market with the rest of the [foreign exchange] market. This is already underway and will soon be completed. Now, we have two regulated systems: the NIMA system, which covers bank drafts and large transactions, and the cash market, which will converge with the larger foreign exchange market.

Al-Monitor:  People on the street are complaining about the dire state of the economy, and many have been forced to leave Tehran to live in suburbs as a result of the current economic situation. Moreover, there are many people who have emigrated or transferred their money to other countries such as Turkey and Georgia. What is your opinion on this matter? What is the solution to remedy these problems?

On the issue of capital outflow, I must say that cheap foreign exchange was a form of subsidy for those who wanted to move their assets abroad. I understand that when the exchange rate was about 37,000 rials, some people purchased real estate in Canada and were able to cover their mortgage payments with their domestic deposit interests; this is not possible anymore. In fact, we used to offer subsidies to people who purchased real estate in the United States, Canada, Georgia and Turkey. The adjustment of the exchange rate helped decelerate the process substantially.

Al-Monitor:  Is the Central Bank worried about the collapse of some of the private banks in Iran? If yes, what are you doing to prevent such events?

Hemmati:  We are not worried, but we are vigilant. We know that some banks have difficulties in their balance sheets, but we are monitoring them and providing support in case they need it. With the new powers granted to the Central Bank, the troubled banks and credit unions will be effectively supervised and managed. We have a long-term program for banking system reforms.

Al-Monitor:  Has this happened yet?

Hemmati:  Yes, we have taken over three credit unions and started the reforms.

Al-Monitor:  A few banks belonging to the military organizations were recently merged. Were they also on the verge of collapse?

Hemmati:  Some of those banks even had a positive performance, but they were merged following the order of the Supreme Leader that the armed forces must withdraw from the banking sector. The process is going well and will be completed in the near future.

Al-Monitor:  EU officials have repeatedly spoken about transactions being done based on INSTEX, the special purpose vehicle launched by the Europeans in January to facilitate non-USD transactions that won’t break US sanctions. What is the current status of INSTEX and have any transactions been made through it?

Hemmati:  To not give the Europeans any pretext [for stalling this process], we established a corresponding company, named a managing director and pledged its required capital, even sooner than the Europeans. Only after a long delay of four months, the Europeans were ready and a $4 million transaction was made through INSTEX, by which we purchased medical equipment for one of the provinces. After that, no transaction has been performed. The Europeans always claim that it should first begin the work by goods that are not subject to sanctions, but INSTEX was launched exactly to facilitate transactions of sanctioned goods. Therefore, I am not sure that INSTEX will be an extraordinary and special vehicle for Iran.

Al-Monitor:  Why were no transactions made after the first one?

Al-Monitor:  So you mean you are not optimistic about INSTEX?

Hemmati:  I have come to the conclusion that the issue is not with INSTEX and its mechanism. The issue is that the Europeans seem to need US approval for their plans. They have failed to find any solution to this problem. That is why I see no point to remain optimistic.

Al-Monitor:  Is there any news about the French $15 billion credit line, or has it reached a dead end?

Hemmati:  France has put so much effort into this, and we had told them that we would accept it on the condition that they pre-purchased our oil. We want to export our oil, and if they do not want to purchase our oil, then I do not see any use for this. I must also add that $15 billion is not much compared to what we have been able to provide to our importers, which has totaled $20 billion since early April 2019. They wanted to take a step and prove that they were able to buy oil within the JCPOA framework; but despite their efforts, it turned out that the United States has not allowed them yet.

Al-Monitor:  You mean that the French proposal is gone with the wind?

Al-Monitor:  Is it true that even the French Central Bank was not willing to guarantee the credit line?

Hemmati:  No, all the issues were discussed between the representatives of the Iranian Central Bank and French, German and British officials. However, they simply made everything subject to US approval.

Al-Monitor:  ​Is the door still open for negotiations to save the JCPOA?

Hemmati:  The president of the Islamic Republic of Iran announced that if Iran were to negotiate with the United States within the framework of JCPOA and P5 + 1, the US sanctions should be lifted.

Al-Monitor:  On the issue of the Financial Action Task Force (FATF), which has extended Iran's deadline a few times, is it true that Russian and Chinese banks have warned Iran that they will not accept to have any financial transaction with Tehran if FATF puts Iran on the blacklist again?

Hemmati:  Joining the FATF is one of the requirements of international banking transactions. So it is natural that all the banks would require compliance with FATF regulations.