Turkey has faced a barrage of recrimination for launching a military operation against Syrian Kurdish militants, but its president vows to maintain the “struggle for survival,” even as the death toll mounts and a humanitarian crisis looms. 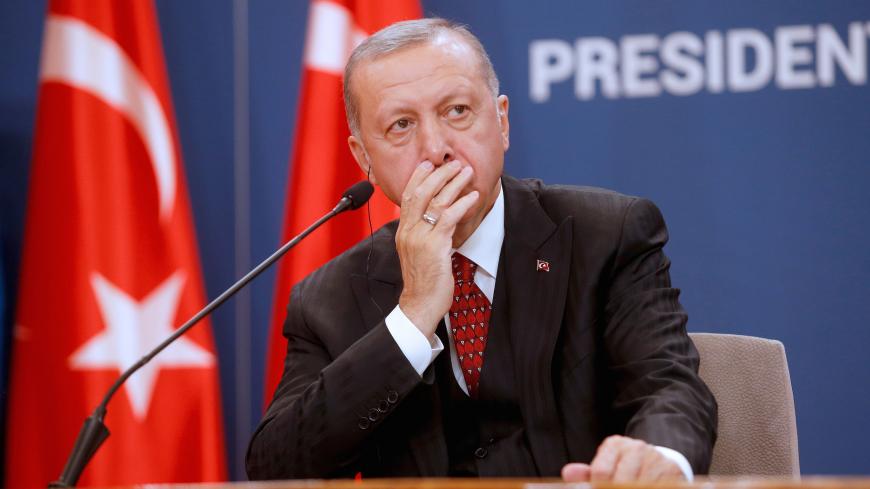 ISTANBUL — President Recep Tayyip Erdogan on Tuesday fended off an international backlash over Turkey’s offensive in northeast Syria that has wrought US economic sanctions and a widening arms embargo from Europe as fighting with Kurdish militants entered its seventh day.

Russia stepped into the lurch left by the United States’ about-face last week to abandon its Kurdish partners in Syria. Russian fighters Tuesday took over a US base and began patrolling a new frontline between Turkey and the Syrian government army that Moscow backs after the Kurdish-dominated Syrian Democratic Forces (SDF) turned to Damascus to ward off the Turkish assault.

President Donald Trump’s decision to withdraw US troops after a phone call with Erdogan has reconfigured the battle lines in an eight-year war that has already claimed hundreds of thousands of lives. In one week, Trump’s reversal of US policy has allowed Syrian President Bashar al-Assad to send troops to areas they left in 2012, severely tested Turkey’s ties with its traditional Western allies and expanded Russian clout in the region.

For Turkey, continuing the offensive despite condemnation from Western governments was “a struggle for survival. … We will maintain our struggle until we reach our objective,” Erdogan said during a visit to Azerbaijan. Turkey sees the SDF as a grave national security threat because of its ties to a decadeslong Kurdish insurgency within Turkey.

Erdogan also said his army has wrested close to 1,000 kilometers (620 miles) of territory from the SDF, which, backed by American firepower, had taken control of about a third of Syria by defeating the Islamic State.

Heavy bombardment of SDF positions in the towns of Manbij and Ras al-Ain continued Tuesday, Turkish television channels reported. And the death toll continued to climb. Kurdish rockets and mortar shells have killed at least 20 Turkish civilians since the start of the offensive Oct. 9. The Syrian Observatory for Human Rights said 71 Syrian civilians have perished. The Turkish Defense Ministry said 611 Kurdish fighters have been "neutralized" and six Turkish soldiers killed, including two in Manbij on Tuesday.

Turkey may be held responsible for war crimes committed by an opposition militia that it backs after video footage appeared to show three Kurdish captives being executed over the weekend, a spokesman for the UN human rights commissioner said Tuesday. The allegations have focused attention on why NATO’s second-biggest army is relying on fighters with purported links to jihadi groups.

Trump on Monday announced a package of penalties against Turkey, singling out three ministers, raising steel tariffs and halting trade talks. But the measures were far less punitive than Turkey had feared and may have been aimed more at subduing the outcry from members of Trump’s party in Congress, whose support he needs if he is to survive an impeachment inquiry into his contacts with foreign leaders.

The Turkish government dismissed Trump's offer for US Vice President Mike Pence to mediate, saying it would never negotiate with “terrorists.” Pence revealed to reporters that Trump had told Erdogan in a Sunday call that he wanted an immediate cease-fire, which the Turks have shrugged off so far in another sign of the diminished influence Washington exerts over Turkey as the two sides hurtle toward a split after years of acrimony over Syria policy.

Close Turkish ally Britain on Tuesday joined seven other European countries to suspend sales of some weapons to Turkey and urged Ankara to end military action that was serving the interests of Moscow and Damascus. European Union members pledged to halt arms exports at a meeting Monday.

German Chancellor Angela Merkel urged Turkey to end the incursion because it was creating human suffering and weakening the fight against the Islamic State. Even the leader of the breakaway Turkish Cypriot administration, which relies on Turkey for funding and security, questioned the operation.

The Kremlin, too, sharpened its rhetoric Tuesday, with President Vladimir Putin’s envoy to Syria calling the Turkish operation unacceptable and denying it had been greenlighted by Moscow. He also said that Russia would not allow fighting between Turkish and Syrian government forces and that Ankara was in talks with its archrival Damascus.

While the Kurds’ pivot to Assad appears to have vastly complicated Turkey’s battle plan, it had been widely expected should the United States withdraw and spells an abrupt end to Syrian Kurds' experiment in self-governance, which Turkey would surely welcome, even if it helps secure Assad’s and, by proxy, Russia’s victory in Syria.

“Putin’s greatest triumph has been to separate Turkey from its Western alliance, from the US and NATO, and to remove the US from Syria with Turkey’s hand, without lifting a finger,” Aydin Selcen, a former senior diplomat who served in Iraqi Kurdistan, told independent broadcaster Medyascope. “But after a half-million people have lost their lives and millions have been displaced, it has to be said that no one has won anything here.”

In Baku, Erdogan again sought support for his plan to settle up to 2 million Syrians in the “safe zone” Turkey wants to carve out along a 480-kilometer (300-mile) stretch of Kurdish-controlled territory in Syria. Turkey hosts 3.6 million Syrians, the largest population of refugees from the war, and Erdogan has long fumed at the EU for only taking about a third as many across the entire bloc.

“Absent an alternative plan to deal with the refugee crisis, the international community should either join our efforts or begin admitting refugees,” Erdogan wrote in The Wall Street Journal.

But the Turkish advance into northeast Syria is threatening a new humanitarian crisis. As many as 160,000 people have fled their homes in the past week, the UN said. The Security Council is expected to meet Wednesday for the second time since Turkey began its offensive.

Erdogan has withstood the fusillade of condemnation from abroad, bolstered by support from most political parties and deeply nationalist Turks who are proud of their military’s prowess and view Kurdish autonomy in Syria as an existential threat that could ignite separatism among Turkey’s population of 15 million ethnic Kurds.

What little dissent exists is not tolerated. Scores of people have been arrested for criticizing the campaign on social media. Authorities are intensifying a crackdown on Kurdish politicians in Turkey and detained the mayors of four predominantly Kurdish towns in dawn operations Tuesday.