Lebanese citizens are living day by day the repercussions of the dollar scarcity crisis, as the fuel sector threatens an open strike next week if the government fails to find a proper solution. 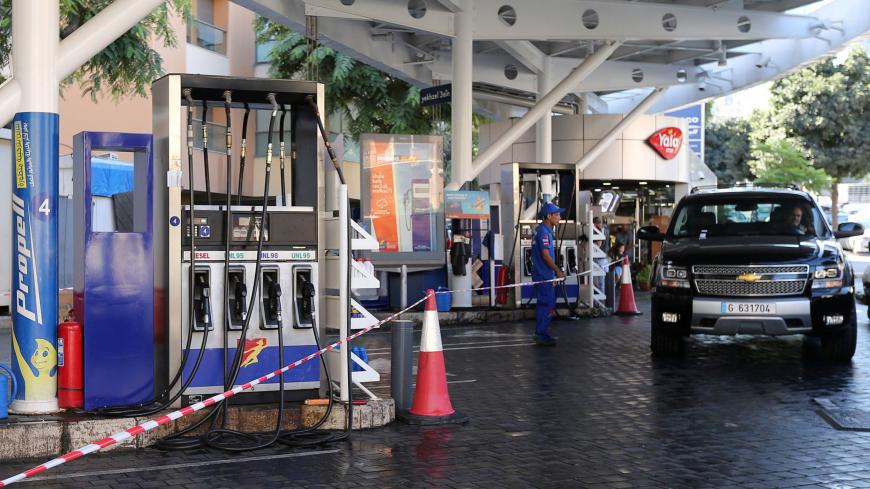 A gas station closes in Beirut during a protest against a tight supply of dollars in Lebanon, Sept. 18, 2019. - REUTERS/Mohamed Azakir

BEIRUT — A scarcity of US dollars is causing a crisis for Lebanese citizens. In a Sept. 25 statement, the Syndicate of Gas Station Owners reiterated its commitment to uphold the 48-hour deadline it had given to the concerned parties to find a solution for fuel traders to the dollar shortage. “Any new deadline would be tantamount to a declaration of bankruptcy of all station owners,” the statement warned.

This comes against the backdrop of a Sept. 24 statement by the governor of the central bank, Riad Salameh, confirming that he would issue a circular next week regulating the financing and importation of wheat, medicine and fuel in dollars. Salameh took his decision after consulting President Michel Aoun, Prime Minister Saad Hariri, Finance Minister Ali Hassan Khalil and other ministers.

The hydrocarbons sector had threatened to stage a sudden and open strike if the consultations with Hariri and the concerned parties fail to provide the dollar liquidity needed by fuel traders to buy their goods.

Fadi Abu Shakra, the representative of the union for fuel distributors and gas stations in Lebanon, told Al-Monitor that consultations are ongoing to avoid the strike. Yet he also pointed out that “97% of gas stations abided by the one-day strike carried out by the hydrocarbons sector in Lebanon on Sept. 18, with a full abidance by oil importers.”

At a press conference following the meeting, association President Georges Fayad announced that Hariri promised to meet with other officials and was inviting the delegations to discuss the proposed solution Sept. 25. Fayad said that as a result, "We will freeze our strike for 48 hours.”

The one-day warning strike, which involved gas stations and companies that import and distribute oil derivatives, was carried out across all Lebanese regions. It aimed to “urge the concerned parties to find a solution to the crisis for the traders, who are unable to secure the dollar liquidity for the purchase of hydrocarbons,” Abu Shakra said. “Things are going to escalate if the stakeholders do not respond to the demands of the hydrocarbons sector.”

He added, “All measures have been frozen for the time being, pending the efforts exerted by stakeholders after the return of Prime Minister Saad Hariri from France on Sept. 22. If things are not resolved within the coming few days, we will take a firm resolution on escalation and declare an open strike by the entire sector.”

The owners of the stations and oil distribution companies revealed about a month ago their difficulty in securing dollar liquidity for the purchase of hydrocarbons.

This comes after Lebanese banks, which usually sell the dollar at the official rate applicable at the Bank of Lebanon — 1,507.5 Lebanese pounds to the dollar — stopped providing dollars to their clients, including owners of the stations and oil distribution companies, to preserve the financial institutions' hard currency reserves. This forced companies to exchange the Lebanese pound for dollars at currency exchange offices.

Abu Shakra said, “A number of money-changers sold traders the dollar at prices above the official exchange rate — that is, at a price of 1,560 Lebanese pounds to the dollar, which caused them significant losses, as they now bear the burden of the currency exchange difference.”

However, things did not stop there. After the hydrocarbons sector strike, the majority of cellphone vendors and distributors boycotted the purchase of prepaid cards from Alpha and Touch, the two mobile phone operators in Lebanon, because they could not secure the dollars to buy these cards sold to the consumer in Lebanese pounds.

Some cellphone stores stopped selling these cards Sept. 20, showing that the crisis of the oil sector is linked to a crisis plaguing the Lebanese economy as a whole and recently manifested in more than one form.

Some universities in Lebanon, including the American University of Beirut, have specified the US dollar as a single currency for the payment of students’ tuition. Meanwhile, most Lebanese banks have been holding onto their dollar reserves.

Economist Elie Yachoui told Al-Monitor that several factors have contributed to the scarcity of the dollar in the Lebanese market — most notably the decline in Bank of Lebanon foreign currency reserves, the diminished dollar liquidity in Lebanese banks, shrinking remittances of Lebanese expatriates, declining foreign investment, in particular from the Gulf countries, and accumulating deficits in the balance of payments. This is in addition to imports that far exceed exports. “This created a state of permanent need for foreign currency to import and to repay Lebanon’s foreign debts in tandem with a failure to secure the entry of foreign currency liquidity to the country,” he said.

“At this point, there is a reality that we need to adapt and accept things as they are,” he said. He added that Bank of Lebanon “no longer has the ability to stabilize the exchange rate of the Lebanese pound as before. There is no central bank in the world that can stabilize its currency forever. Our economy in Lebanon is a market economy, subject to supply and demand, and therefore things are heading toward the rise of the Lebanese pound exchange rate against the dollar. It is of course the citizen who will end up paying the price.”

Nada Nehmeh, deputy chairman of the Consumer Protection Association in Lebanon, a local consumer affairs association, told Al-Monitor that the association has been receiving complaints about the crises involving fuel and rechargeable phone cards that have stemmed from the scarcity of dollars. “This crisis will inevitably have implications for Lebanese citizens. The consumer bill will rise in the coming weeks.”

Nehmeh added, “The citizen is now feeling the direct damage through the high exchange rate. The consumer bears the consequence of the chaos in the market. As for indirect damage, it will be reflected in commodity prices, and it will be manifested after about two weeks. Lebanon imports about 85% of its needs and consequently any cost increase for traders will translate into higher commodity prices.”

She said some observers are saying that distributors and sellers of some commodities have started to impose higher prices in the past few days under the rationale of having to pay higher prices for imported goods.

“Raising prices violates the consumer protection law,” Nehmeh said. “Article 25 of the said law states that the public and private sectors are required to have their bills in Lebanese pounds. But on the ground, the dollar has become the quasi sole currency traded in the consumer market, including schools, universities and even hospitals.”

Economist Jassim Ajaka told Al-Monitor that the buzz about the scarcity of the dollar is a bit exaggerated. “This is not really a crisis but rather a behavior that needs to be changed. I think the basic problem is that the transactions are made in cash. The solution would be the use of other means of payment such as checks or bank transfers.”

He said the solution is financial inclusion and the use of payment methods provided by banks offering guarantee and control over the fate and use of foreign currency. “This means that each transaction should be settled by a check, via bank card or bank transfer,” Ajaka said. “In this case, the exchange rate applied is the interbank exchange rate, which remains within the official margin set by the Bank of Lebanon.”

In this context, Aoun told reporters upon his return from the UN General Assembly on Sept. 27, “There is external pressure being exerted on Lebanon, namely on its economy. And these pressures are not new." He added, “There is no danger on the US currency in Lebanon, especially with regard to the dollar crisis.”