The IDF spokesman told a bald lie, then mumbled, then denied, and within a short time had to admit to the failure of his maneuver to outwit Hezbollah. 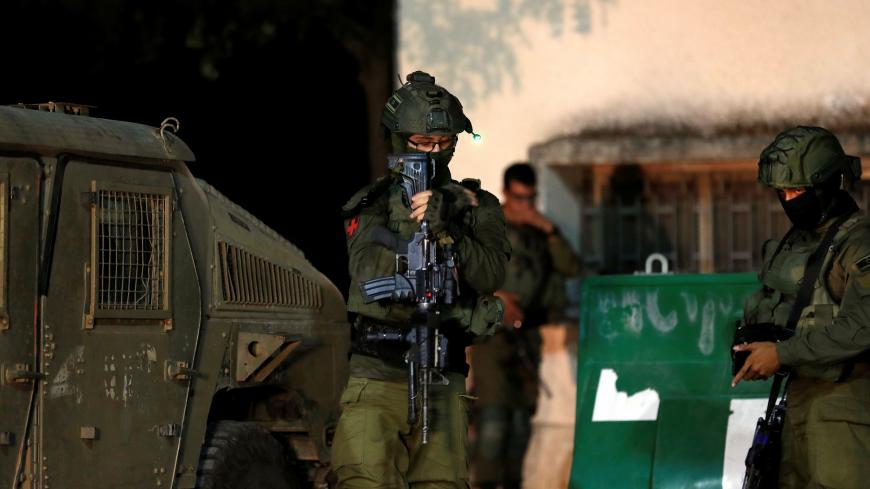 Israeli troops are seen at the northern Israeli village of Avivim close to the border with Lebanon, in northern Israel, Sept. 1, 2019. - REUTERS/Ronen Zvulun

Often, when a reasonable person decides to lie, he blushes, mumbles and sweats. When a professional liar lies, he’s at his best — confident, fluent and successful in creating, to anyone who doesn’t know him, a believable impression. “The IDF spokesman’s deception” Sept. 1 was, no doubt, the first instance. He told a bald lie, then mumbled, then denied, and within a short time had to admit to the failure of a maneuver to outwit Hezbollah. But the episode doesn't start and end with the IDF spokesman’s unit; it has very problematic ramifications for Israel’s conduct when it comes to its integrity. This isn’t someone’s youthful folly but certain damage.

Hezbollah Secretary-General Hassan Nasrallah announced his intention to seek revenge for the IDF’s actions in Lebanon and its killing of his militiamen. Nasrallah, like many mafia dons worldwide, has the reputation of someone who stands by his word. After the recent escalation on the northern border, Nasrallah made clear what the nature of his revenge would be, and the IDF prepared as the IDF knows to prepare. But this time someone in the IDF got the idea to “deceive” the enemy.

The well-known cycle of these escalation rounds always plays the same: Hezbollah wants blood, and the IDF makes an effort so that he doesn’t see blood, but then Hezbollah wants to continue to take revenge. So this time, the IDF thought it would be best to create a false show of injured soldiers (perhaps even more than just injured), who would be placed at such angles that would allow Hezbollah men to watch them. IDF helicopters would come to evacuate them, they would be placed on stretchers, transferred to the Rambam Hospital in Haifa, the IDF spokesman would announce that our forces were injured, Nasrallah could say he managed to attack soldiers and then leave us alone. So simple . . .

Everything went as planned. Almost. Hezbollah fired a few anti-tank Kornet missiles toward an IDF post and military vehicles, near the Avivim village, which had a long history of withstanding Katyusha rocket fire until we withdrew from the security zone in South Lebanon 19 years ago. The IDF responded by firing about 100 shells toward Marun a-Ras. The soldiers painted with blood coloring to simulate injuries were brought to the planned spot; the helicopters got there on time. The IDF spokesman reported some injuries and didn’t elaborate, but noted that the hospital received the injured. Hezbollah celebrated, announced Israeli casualties, and even added an especially strange statement identifying with Ethiopian Israelis’ just struggle for equality: It announced that it had not shot at an Israeli soldier because he was Ethiopian.

In the meantime, Yoav Galant, the Cabinet member and general (Res.), was interviewed, and reported, in innocence, that our forces had no injuries. When someone following the news hears the IDF spokesman speak of several casualties while a politician, on the eve of an election, says there were no injuries, it’s hard to think that the listener would believe the politician. But Galant, who apparently wasn’t briefed on the clever deception maneuver, ruined the show for the IDF spokesman. Thus, the spokesman released the following strange announcement: “To continue the initial report on the event in the Avivim area, several anti-tank missiles were fired from Lebanon toward an IDF base and vehicles in the area. There are a number of injuries. The IDF returned fire toward the source of the missiles and toward targets in southern Lebanon. Details are being checked and will be reported. We ask [the media] to refrain from any unofficial and irresponsible report that has not been transmitted by the IDF spokesman.”

This is Israel. This is the end of the second decade of the 21st century. The world is already flat, everyone sees everyone, almost everything is transparent, and the IDF spokesman is reporting from the 1948 War of Independence! How long did the IDF spokesman think he could sustain such a lie? What did he think to do about public officials who were supposed to arrive at Rambam Hospital to visit our wounded heroes and speak with the worried families? How did he think to explain the fact that the names of soldiers painted red were not reported? And maybe he thought to announce their names and grant them a commendation for not bursting into laughter as they were transferred to the hospital, only so that Nasrallah would think they were truly injured and wouldn’t want to continue to seek revenge?

This is, in my view, an especially grave episode in several respects:

I don’t think that the spokesman can remain in his position after this deceit, whether he initiated it or he wasn’t strong enough to reject it out of hand using the just argument that this would be a move that could destroy the establishment he heads. IDF chief of staff Aviv Kochavi will have to explain whether he was involved in this strange decision, and make a note to himself.

And as for Prime Minister Benjamin Netanyahu, the fact that he was part of it will have to be a consideration for anyone who thinks that this is the experienced man who can be depended on even after the Sept. 17 election.