Iraqis are divided over the government's three-month closure of Alhurra’s Baghdad office for a controversial report alleging corruption in religious institutions. 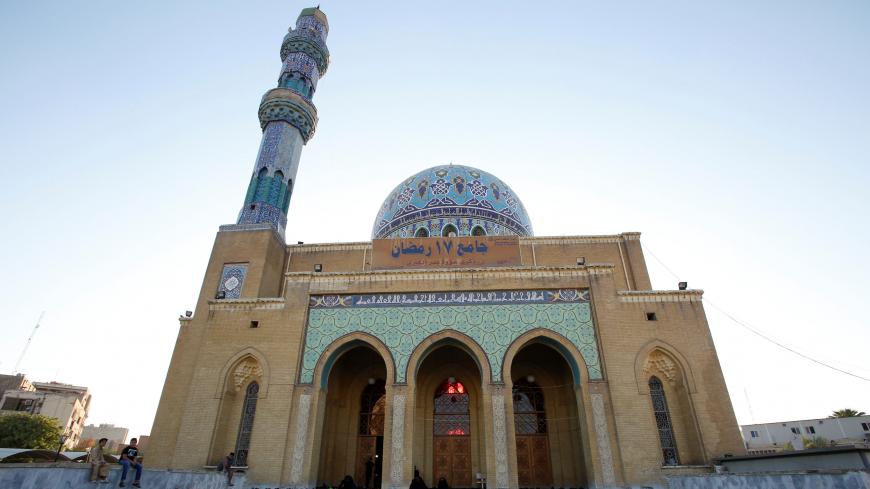 Sunni worshippers attend prayers at a Sunni mosque on the first day of the Muslim festival of Eid al-Adha in Baghdad, Iraq, Sept. 12, 2016. - REUTERS/Khalid al Mousily

The Iraqi government has shut down TV broadcaster Alhurra's offices in the country and suspended its license after it aired a report some describe as investigative journalism and others claim was a US-engineered attack on Iraq's religious institutions.

Alhurra is a US government-funded, Arabic-language satellite broadcaster based in the United States. In late August, it ran an investigative piece alleging corruption within Iraq's Sunni and Shiite religious endowments. The report, "Religious Corruption in Iraq," talked of out-of-control institutions that hide under shrine's domes and religious turbans.

The result was widespread outrage among Iraq’s religious authorities and politicians, prompting the government to close the station's local offices beginning Sept. 2 for three months. Some observers see the story as related to ongoing tensions between the United States and Iran and Iraq's concerns of being caught in the middle.

Alahad TV, a local satellite channel owned by the Shiite paramilitary group Asaib Ahl al-Haq (AAH), called the report part of Washington's alleged soft war against Iraqis. AAH reported the United States is attacking the cohesion between religion and society and supporting social media "puppets." AAH, which is funded by Iran and one faction of Iraq's Iran-backed Popular Mobilization Units, even claims Washington established the Islamic State to destroy Iraq.

Civil activists found themselves in the middle of the fray as online groups possibly linked to powerful pro-Iran factions accused Iraqi activists, journalists and scholars of seeking "normalization with Israel.”

Iraq’s Communications and Media Commission (CMC) accused the Alhurra reporters of using anonymous sources to defame and cause moral injury and demanded a formal apology. In a statement, the CMC said Alhurra must “correct its position."

The parliament has threatened to sue Alhurra, calling the reports "false, fabricated and figments of imagination.”

The Fatah Alliance, led by Hadi al-Amiri, called on the Iraqi government to "take legal action against this US-funded channel for its intentional offense and deliberate attack on the nation’s positions of power."

In response to the allegations, Alhurra issued a statement saying its story was “fair, balanced and professional."

"During the extensive preparation of the report, the individuals and institutions involved were given the chance to reply, which they declined. ... Given the major political, economic and social challenges the region faces, there is a need for greater transparency and honesty, not less," the statement read.

The US Embassy in Baghdad said the State Department has no censorship authority over Alhurra's content, and the outlet stated it's up to the Iraqi government to respond to reporting it considers inaccurate.

The report's corruption allegations include the Shiite endowment’s investment projects in tourism, health, education and agriculture that employ thousands of people. The report also claimed the Sunni endowment had spent large sums of money on a previous campaign to combat extremism that went to a local media outlet owed by the endowment, and allocated unreasonable amounts of money for competitions to memorize the Quran.

The Iraqi public had varying reactions to the report.

“Many people are increasingly certain about the religious establishment’s corruption; it is evident from clergymen’s luxurious lifestyle. Still, it is not as depicted in Alhurra’s hostile, biased report,” Khalid al-Waeli, a veterinarian from Baghdad, told Al-Monitor. “Fighting corruption is the duty of citizens and the government, which is unfortunately the most corrupt party in Iraq.”

Waeli accused Alhurra of firing employees who did not promote the channel's American propaganda.

“The channel is sectarian. It expelled its Shiite employees several months ago and is now targeting the Shiite authority,” he said. “This was two points against it and it's time for revenge.”

He welcomed the suspension as a way to prevent future targeting of religious symbols like the endowments, saying, “We don't have to wait. The best means of defense is to attack."

Aziz al-Enezi, an Iraqi pharmacist based in London, partially agrees with Waeli regarding the report’s political motivations.

“Alhurra has been one of my favorite TV channels, but since the arbitrary and sectarian dismissal of some of its employees, my view of it has changed,” he told Al-Monitor. “Recently, Alhurra has been publishing programs focusing on Syria and Iran in a way that's affecting its credibility.”

However, Enezi denounced the decision to suspend the channel in Baghdad. “I am in favor of conducting such investigative reports and totally against the decision to suspend Alhurra. It indicates a decline in press freedom," which he said was one of the few gains after 2003, when a US-led coalition invaded Iraq. “Ironically, a US-funded channel is shut down by a government brought about by the US itself."

A dentist from Babylon who asked Al-Monitor not to disclose her identity also blames the United States for bringing such a corrupt government to Iraq. Also, “The report aims to create confusion among the public,” she said. “Shutting down its offices means nothing, and it will keep broadcasting as before.”

Still, she thinks those who condemned the report are the beneficiaries of corruption in one way or another. “Religious institutions have swallowed all the investments in the country,” she added. “Their projects are funded by the state, yet the profits are for them alone.”

Fadi Germanus, an Iraqi lecturer at the University of Vienna, admires Alhurra's efforts to expose corruption.

“Suspending the channel indicates fear,” he said. “However, what I can't understand is the oppressed's desperate defending of this ruling class!”

Suha Hassen, an Iraqi doctoral student in counterterrorism at George Mason University in Fairfax, Va., said the ruling parties depend on the public's defense of unifying religious symbols.

“It is a psychological defense. The majority of Iraqis are ready to lose everything rather than their symbol,” said Hassen. “Many Shias aren't ready to discuss such corruption objectively. Others, both Shia and Sunni, welcomed the report for ideological reasons because they revere other symbols. None of these groups are ready or aware enough to discuss corruption" that threatens their own identities.

“You can't touch this religious umbrella, which is used by the political parties to protect themselves,” she said. “Doing so is an existential threat and not a mere discussion of corruption. The people won't accept it whatsoever.”