In an exclusive interview with Al-Monitor, Yusuf bin Alawi bin Abdullah, Oman’s minister responsible for foreign affairs, describes his country's role as facilitator, not mediator, to resolve the region's conflicts, including Iran, the Israeli-Palestinian conflict, Yemen, and the embargo of Qatar. 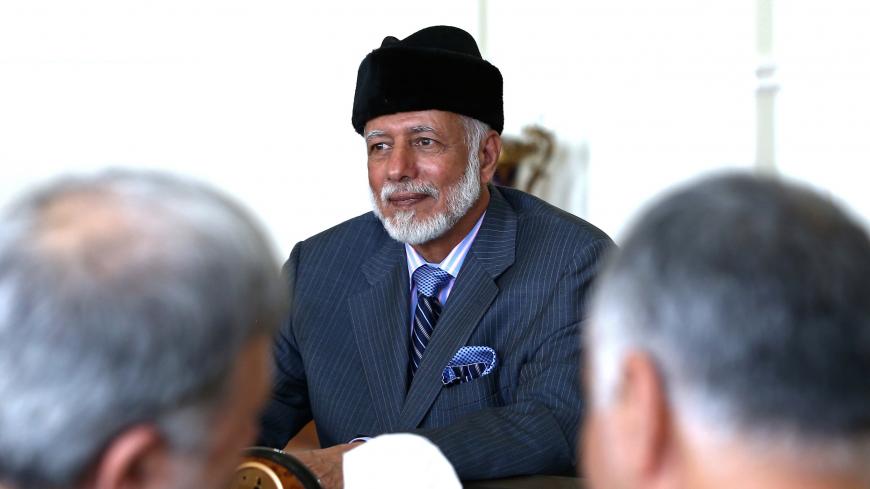 Rouhani briefly described the initiative in his Sept. 25 speech at the United Nations.

“We haven’t seen it,” said bin Alawi, referring to the details of Rouhani’s plan, but “if the theme … of that [plan] is based on stability, of course, we will support it.”

In an exclusive interview with Al-Monitor on the sidelines of the UN General Assembly, bin Alawi emphasized that Oman is a facilitator, not a mediator, in the current crisis in the region.

“Oman will assist,” he said. “We are not playing role of mediator. What we choose for ourselves is the role of facilitator.”

Asked about Oman’s role in Yemen, bin Alawi said, “We always facilitate any attempt for parties to talk to each other, or any efforts by [UN Special Envoy for Yemen] Martin Griffiths to keep or bring parties from Yemen to meet in Oman.” He added, “If that becomes required, of course, Oman would be prepared to propose such a thing.”

With regard to the blockade of Qatar by Saudi Arabia, the United Arab Emirates, Egypt and Bahrain, bin Alawi said, “At the moment, I don't have any indications there is a desire from some of the GCC [Gulf Cooperation Council] member states [that are parties] to this crisis that they are willing to reconcile." He added, “To reconcile is better. … They should figure out how to overcome or at least defer them for some other time.”

Asked whether Oman, which in June announced plans to open an embassy in Ramallah, would consider establishing relations with Israel if an Israeli-Palestinian peace process takes shape, bin Alawi said, “We'll see, everything is on the table.”

The interview was conducted by Al-Monitor President Andrew Parasiliti. A lightly edited transcript of the full interview follows:

Al-Monitor:  Mr. Minister, again, thank you for taking the time today. Oman is well known for its effective and discreet diplomacy and its commitment to dialogue with all parties, including Iran and including Israel, and friendly relations with all regional countries. What is Oman's perspective and role on how best to deal with Iran and the broader issues of security in the Gulf, and do you consider yourself a mediator in this dispute?

Bin Alawi:  Well, I mean, where this issue of Iran — as the circumstances of the day — there are many voices which have said that the resolution of this crisis is through the use of diplomacy. Both sides, or even all the sides, have one way or another expressed their wish to engage in some sort of diplomacy — diplomacy on the platform or diplomacy behind [closed] doors. And those are good things.

Oman will assist. We are not playing the role of mediator. What we choose for ourselves is the role of facilitator.

That is how we see things right now. But, of course, the vision or views of anyone through the crisis of the day — as a result of the attacks on Aramco — is a vision of reaction. When it becomes surprises, the reaction will be tough. Then after there will be another vision, a clearer vision of that actions. We are still in that time.

In another week or so, we will see people start talking about what is the best [way] to resolve [the crisis]. Saying all these things that indicate no one really wishes to use force the hard way. Even when the leader says all options are on the table, they do not mean using power, but they mean that they are determined to resolve the problem.

Al-Monitor:  Does Oman support President Rouhani's security plan that he laid out here?

Bin Alawi:  Well, President Rouhani, his plan, we haven't seen it. The details will be put out later on. But if the theme and base of that [plan] is based on stability, of course, we will support it.

Al-Monitor:  And do you see anything in the Russian Gulf Security Initiative?

Bin Alawi:  Well, the Gulf region is becoming an important area for the rest of the world because of the energy. So Russia has the right to propose a plan, or ideas, or whatever it may be, to help stop further retaliation. Russia is a big country. Russia, of course, is an oil producer. Russia is in the Security Council. So from all the angles, Russia should also be involved on the world stage outcome of this crisis.

Al-Monitor:  What more do you think can be done to end the war in Yemen, and what do you see as Oman's role? Is Oman playing a facilitating role here as well with the Yemeni parties?

Bin Alawi:  We always facilitate any attempt for parties to talk to each other, or any efforts by [UN Special Envoy for Yemen] Martin Griffiths to keep or bring parties from Yemen to meet in Oman. That is what we are always doing. So if that becomes required, of course, Oman would be prepared to propose such a thing.

Al-Monitor:  What are your expectations regarding the Trump administration's peace to prosperity effort? I know the plan has not been rolled out yet, and we are waiting for a new government to be formed in Israel, but again, here, what do you see as Oman's role, and what further steps will your country take to further this effort?

Bin Alawi:  Of course, we don't know the content of that, but what we know is [it is a ] diversion from the old methods of negotiation between the Palestinians and the Israelis. That was based — all the Palestinian-Israeli talks and all talks. The major point in most is based on the border, and that's why the border was not easy [to resolve].

What I feel — I'm not speculating, but this is what I feel. President Trump is doing something totally different. Maybe he is not going to follow the method of the previous administrations. I think he will try to see the feasibility of his idea to help convince the parties and beyond the parties for more resolving this 70-year-old problem. That could include a lot of details — two, three different details from the details before. It would require the two governments — the Israeli government, the coming government, and the Palestinian Authority government — with the support of regional governments.

Al-Monitor:  Oman is one of the few countries that has maintained very strong relations with the Palestinians and the Palestinian leadership, and you also hosted the prime minister of Israel in Oman. Assuming this process takes shape, would Oman consider something like establishing formal relations with Israel?

Bin Alawi:  We'll see, everything is on the table.

Al-Monitor:  Do you see any progress at this point toward reconciling the dispute between the four Arab states and Qatar, and what does this mean for the GCC?

Bin Alawi:  This crisis is a local crisis, a domestic crisis. It does not have any linkage with any other crisis or with others [outside the GCC] — this is a domestic GCC crisis. At the moment, I don't have any indications there is a desire from some of the GCC member states [that are parties] to this crisis that they are willing to reconcile, because [while] some sort of reconciliation exists in their vision, [it is] not a full reconciliation, and they [do not] categorize it as a high priority. Maybe right; maybe not right; it depends on how you look at it. But to reconcile is better. At least we see the GCC facing all these challenges not far from them. They should figure out how to overcome or at least defer them for some other time. The issue is handled by the state of Kuwait, and they are putting a lot of effort [into the matter], led by His Highness, the emir of Kuwait, and his staff in the Foreign Ministry and other related aliases.

Al-Monitor:  Last question. You met with Syrian President Bashar al-Assad in July. How do you see the situation evolving in Syria?

Bin Alawi:  I think it's very promising. They are still fighting some pockets of terrorists in the north, but in general, they feel it's a hopeful and very promising situation. And I see that the committee of — the constitutional committee — has been agreed, so [they] should start putting together the [new] constitution. Within a year, probably, people might vote for their representative, and that will give more hope, more promise to the people of Syria.

by Murielle KASPRZAK and Joseph SCHMID | AFP | May 26, 2022
END_OF_DOCUMENT_TOKEN_TO_BE_REPLACED