The films at the Duhok International Film Festival in Dahuk, Iraqi Kurdistan, show how conflict and trauma are hallmarks of collective memory in the region, from Tunisia to Palestine to Iraq. 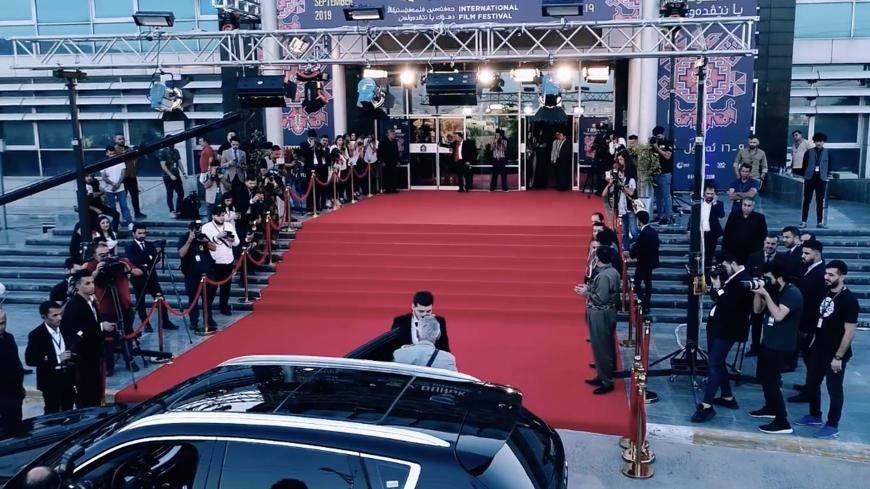 People arrive for the opening ceremony of the Duhok International Film Festival in Iraqi Kurdistan, seen in a still from a video uploaded Sept. 10, 2019. - Facebook/duhokiff

The theme of this year’s festival is coexistence and acceptance, with a focus on films from across the Middle East. Shawkat Amin Korki, the festival’s artistic director and a well-known film director, told Al-Monitor, “[Dahuk] is a city situated in a region that has been the cradle of various religions, ethnicities and languages. With this theme, we want to underline that genuine coexistence is possible yet fragile.”

Other festival staff highlighted that cinema acts as crucial social infrastructure; diverse groups convene together and can understand one another and become more tolerant. Korki sees cinema as a tool for coexistence. “The two are deeply connected. A good film enables you to understand the feelings of your friends and enemies. That is key to coexistence,” he said.

From Tunisia to Palestine to Iraq, conflict and trauma are hallmarks of collective memories in the region. French-born Syrian director Soudade Kaadan will compete in the World Cinema Feature section with her wildly mercurial film, "The Day I Lost My Shadow," which won the Lion of the Future Award at the Venice Film Festival. “I am looking forward to feature my film here. I have always felt that the story would resonate more with an audience that has felt war before,” Kaadan told Al-Monitor when asked about the festival’s focus on coexistence between fragile communities. At its core, the film focuses on a mother trying to cook for her son during the coldest winter in Syria. “This very human struggle can be applied almost anywhere and particularly here," she said.

Kaadan walked away from a successful career in documentary filmmaking because she felt she could not be objective behind the camera and that only fiction could express the fog she was facing. “The war made me feel that I lost my shadow so I started writing a magical realism story,” she said, which cuts between mundane acts of kindness and the freakish, exceptional trauma people experience during war. “Those who survive war are still alive but without a shadow.”

Palestinian director Annemarie Jacir employs laugher to engage with her audience. Her film "Wajib," which is part of the festival’s Focus Country section follows a mismatched duo of a traditional father and his spirited expat son who deliver family wedding invitations in Nazareth. Jacir told Al-Monitor, “This is a small story from Palestine, about a father and son living in a very specific context. But family tension is the same all over the world.” She believes "Wajib" will receive a strong reception at DIFF, “not just because of the strong family connection but also because we share a common history of being the underdog, of seeing our region being torn apart, and insisting to go forward with our lives and still have hope for more despite the blackness surrounding us.”

The festival comes at a time that Iraq is reeling from a war that extremists waged to eliminate exactly the social diversity that reflects the breadth of history of the country. In July, Nobel laureate Nadia Murad blamed ongoing tension between the central government in Baghdad and the autonomous Kurdistan Region in Erbil as the key reason for displaced Iraqis to return back to their homes. However, the two sides now seem to be trying to improve their relations.

One panel at the festival this week will explore how the two can cooperate to grow Iraq’s film industry.

DIFF will also feature films that promote harmony within Iraq. In "Son of Babylon" a boy and his grandmother travel through the country to search for answers about his father who went missing during the Gulf War in 1991. This film will resonate with Iraqis who know someone who went missing, which was recently estimated at between 250,000 to 1 million. The director, Baghdad-born Mohamed Al Daradji, told Al-Monitor, “The audience will experience how human voices are still heard, even during the chaos of war.”

The festival opened Sept. 9 with the film "Camion" about a young Yezidi woman and her son fleeing to Iran after the Islamic State invaded their village. Nada Azhari Gillon, an Arab and Asian film critic, was ecstatic about the rest of the festival. A member of this year’s jury on Kurdish Cinema, she sees this as a unique opportunity to watch Kurdish cinema due to often limited distribution in the region. “Just one film can change your thoughts,” she told Al-Monitor, “about anything and anyone.”