Who is pulling the strings in Egypt's irreverent puppet show?

A new satirical puppet show in Egypt has thousands of fans — but there is a major debate on who is behind it. 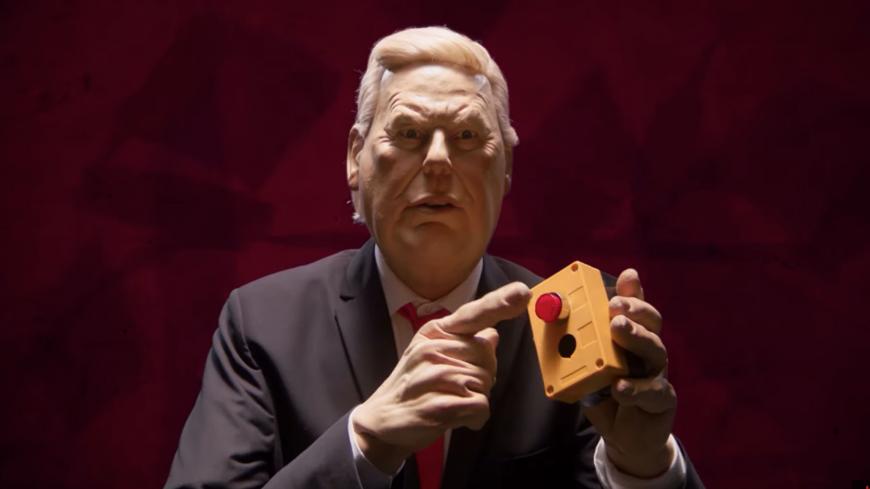 A puppet of US President Donald Trump is seen in a still from an episode of "Waraa el-Setara" uploaded Aug. 17, 2019.

CAIRO — Is it clever, acid-tongued satire or blatant fake news and propaganda? "Waraa el-Setara” ("Behind the Curtain"), the Egyptian version of the British satirical puppet show “Spitting Images” and the French “Les Guignol,” is being hotly discussed on Egyptian social media.

Ever since its launch on YouTube on July 1, “Waraa el-Setara” has been poking fun at regional leaders from Israeli Prime Minister Benjamin Netanyahu to Turkish President Recep Tayyip Erdogan. Other global leaders such as US President Donald Trump, former Libyan President Moammar Gadhafi, former Israeli Prime Minister Golda Meir, former Supreme Leader of the Islamic Revolution in Iran Ayatollah Ruhollah Khomeini and Emir of Qatar Tamim bin Hamad Al Than also get their share, though so far Egyptian President Abdul Fatah al-Sisi has not appeared.

The program says on its website that it is “totally biased toward enlightenment in the face of darkness” and “supports reason rather than stupidity.” Its six episodes have already mocked Iran's late Supreme Leader Ruhollah Khomeini's belligerent speeches by showing him as a drum player beating war tunes on a night club stage. It portrays former Qatari Prime Minister Hamad Bin Jassim as a poker player whose cards all feature the face of Tamim, the emir. Erdogan is shown being tried and convicted of “the murder of secularism, the rape of journalism and bigamy — for marrying both the Muslim Brotherhood and the Islamic State.”

The show has attracted thousands of subscribers on YouTube, but the satire has drawn a mixed reaction. Facebook user Ahmed Halima wrote July 30, “The lies, deceptive ideas and misleading information are massive. Does saying the 'Waraa el-Setara' is not neutral in its description make lies acceptable?”

Another Facebook user, Nida Aouina, commented in a July 17 post, “Everything in it is suspicious: the unreasonable mockery of Qatar, the fact that it never mocks Saudi Arabia, the UAE or Sisi, the lame ridiculing of Islamists … and description of Islamists as puppets in the hands of colonial countries.”

Critics point out that the names of its producer and production team have never been revealed. Al-Monitor tried to contact the production team by emailing the address given on the program's website, but there has been no reply.

Wissam al-Mouji, an Egyptian writer of plays for puppet theater, told Al-Monitor that under Egyptian law, puppet shows need the consent of everyone they portray. “If the person portrayed by the show is dead, the consent of their parents is then required, and this is almost impossible with the figures portrayed in the program.”

“I believe the reason the names of the production team are not made public is that they fear that the persons portrayed in the program will sue them,” he said, adding that if they were supported by a foreign country or political party, “they would have revealed their names without fear of prosecution because their sponsors would have protected them.”

Mouji believes that the public confuses objectivity with impartiality. “The program uses news reports and documented sources, even if it involves some comical exaggerations,” he said. “It uses some sources and some news and disregards others. But this [selectivity and bias] is normal in political theater, which often reflects the views of its producers. Given that it is a political program for adults, the audience can easily do their own research on an issue addressed in the program and come across different views from other sources.”

Hani El-Banna, a puppet theater director at the Egyptian National Theater, told Al-Monitor that the show appeals to Egyptian and wider Arab audiences because satirical puppet shows were part of their heritage.

Puppet shows in Egypt were very popular among children and some adults. For example, the puppet show “Elly Fat Sat” was very successful in the 2000s. This show's puppets portrayed classical artists, singers and intellectuals.

Bahjat said, “This program could have been done with actors instead of puppets. But puppets were specifically chosen because they give the impression that the politicians are being controlled by larger forces, and this strongly attracts the audience that opposes the current regional political reality.”