The Middle East and North Africa region faces serious water risks, but experts say the collective action needed to address the problem is still far off. 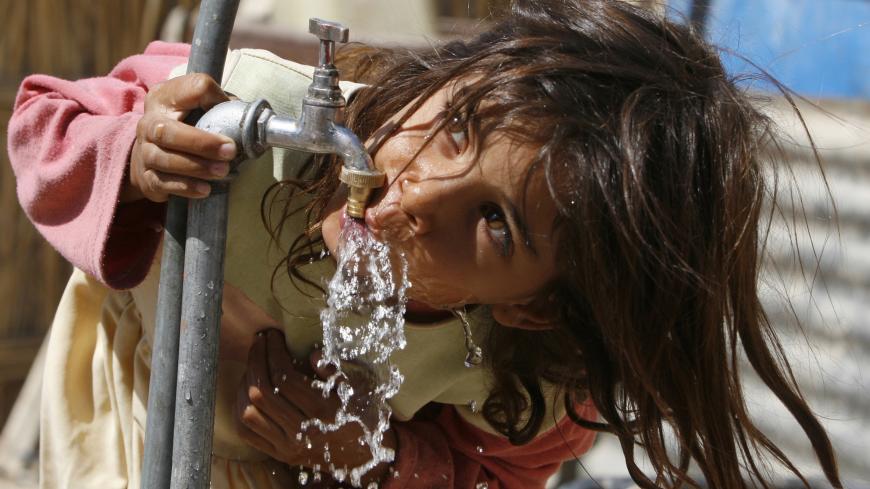 Of the 17 countries that face water stress, 12 of them are in the Middle East and North Africa (MENA), placing the region at not only economic and environmental risk but also political risk, according to a global report.

“When taps run dry, it can lead to massive unrest,” Rutger Hofste, an associate at the World Resources Institute (WRI), told Al-Monitor, referring to data on global water stress and risk released by the organization Aug. 6. “The stakes are high.”

The data was collected over three years, from 2016 to 2019, and made into interactive maps in a project called Aqueduct 3.0.

“The literature shows that if [BLWS] exceeds 40%, you are in this high category, which means you are at risk if a drought hits or any other external factor has an effect on your basin,” explained Hofste, one of the co-authors of the report. “In the extremely high category — when more than 80% is withdrawn annually — the risk of not being able to satisfy water demands when there is a drought is just extremely high.”

All of the 19 MENA countries were placed in either the high or extremely high category, making it the world's most at-risk region. Qatar, Lebanon and Israel topped the list. Hofste pointed to the arid geography of the region but said the rankings are also significantly influenced by climate change and socio-political issues.

With five of the warmest years on record taking place since 2010, global warming leads to irregular rainfall and puts a strain on reservoirs.

“The scenario will depend on how effective we are, as humankind, in reducing the amount of CO2 and greenhouse gases in the atmosphere,” warned Hofste.

However, he also noted that climate change is by no means the only culprit behind water stress, saying, “In our analysis, socio-economic change is often a bigger factor and often ignored.”

Such issues include the region's poor approach to recycling, with 82% of wastewater going untreated, as well as insufficient water management. More than half of Lebanon’s 50,000-80,000 private boreholes — deep, narrow holes dug to locate water or oil — being illegal.

Projections indicate an unsustainable supply of water, with the worst-case scenario of supply decreasing by over 1% in much of the region by 2030.

“We are building up to these problematic situations when you only leave a very small buffer between supply and demand,” Hofste explained, adding, “Extremely high BLWS sets the stage for a crisis situation, but the trigger might be an extreme weather event.” Irregular droughts and floods are likely to increase with climate change.

To address this precarious situation, WRI recommended countries improve irrigation practices (agriculture consumes as much as 90% of fresh water in some MENA countries), build reservoirs for times of drought and build effective water treatment facilities.

Some countries have already taken measures — such as Oman treating 100% of its water and reusing 78%, and Morocco introducing a nationwide groundwater management program that regulates water used for agriculture.

However, Johan Schaar, the author of a recent report on water, climate change and security in the region, told Al-Monitor that individual countries cannot adequately address water stress, with every state in the region sharing at least one aquifer and 60% of the region’s rivers and lakes crossing borders.

“You cannot address the water issue in isolation. … You have to address the security framework, water and climate issues together,” said Schaar, an associate senior fellow at the Stockholm International Peace Research Institute. “This of course is a pretty tall order, but it is difficult to see another way. … These threats of water stress and climate change are of a nature that they have to be addressed collectively … [but this] increases tensions massively and adds to already existing tensions between states.”

Water scarcity also causes issues on a local level. In 2013 a majority of rural conflicts in Yemen were over water. “There has been a lot of debate about the drought that preceded what happened in the 2011 [Arab Spring]. … One side says this was a major factor, and the other says it was only a contributing factor,” Schaar said.

There are also more indirect ramifications of water stress. With agriculture consuming the largest proportion of water, many Middle East and North Africa countries are turning abroad for food.

“The dependence of nations in the Middle East on food-producing nations outside of the region is likely to increase,” Schaar said, explaining that Gulf states have purchased large tracts of arable land in Sudan. “I don’t think there has been a general awareness of the degree of ownership or leasing of land to Gulf states in Sudan and how that became one of the issues and grievances in the political changes that happened recently. It may be that we see similar developments in countries where Gulf states have a direct interest in agricultural production.”

He said that these examples show how interconnected water is to security concerns and the wide-ranging fallout if not properly addressed. However, the very scope of the problem may be one reason the situation has gotten so precarious.

“What might happen is so dramatic that one sort of stays away or hesitates to really go into and understand the long-term implications or consequences of what will happen,” Schaar said, "I think we are still a little bit behind in our analysis and planning and we do not yet see the major transformations needed to avoid the dramatic impacts that climate models show us.”

Aqueduct 3.0 aims to prompt people to face the issue and begin preparations.

“Hopefully people will realize this is a very problematic situation and we are just waiting for this extreme weather event to get into a crisis,” Hofste said. “What I hope people will get from it is putting it on the radar. … Your water stress is not your water fate. It can change.”