Several reasons pushed President Mahmoud Abbas to suddenly end the services of his advisers, most notably his intention to downsize the number of his many advisers amid the crippling financial crisis hitting the PA. 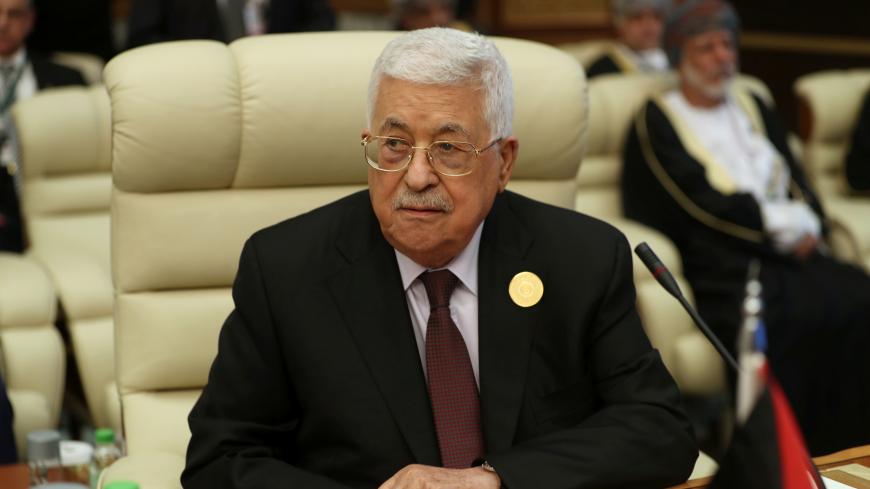 RAMALLAH, West Bank — Palestinian President Mahmoud Abbas decided to fire all his advisers Aug. 19, regardless of their title or ranking. He also canceled all “the decisions and contracts related to them,” and suspended the rights and privileges they received in their advisory capacity.

Abbas’ decision, published by the Palestinian official news agency Wafa, made no mention of the reasons behind the move or the exact number of the fired advisers. But on the same day, Wattan news listed 10 advisers who were allegedly fired, most notably, religious affairs adviser Mahmoud al-Habbash, diplomatic affairs adviser Majdi al-Khalidi and legal affairs adviser Ali Muhanna.

Nabil Shaath, Abbas’ adviser for foreign affairs and international relations, told Al-Monitor that the president's decision is linked to the economic crisis that the Palestinian Authority (PA) is battling. “The number of his advisers has increased over the past years, so he sought to keep only a restrained group,” he said. “I asked the president whether I was affected by the decision, he said no.”

Kamal al-Sharafi, an adviser to the president for human rights and civil society, was fired. “I think Abbas’ decision comes within the framework of restructuring and rebuilding the overstaffed presidency institution,” he said.

He told Al-Monitor, “Money and the advisers’ entitlements have nothing to do with this decision. We are in the process of restructuring and there are a large number of advisers to the president, around 20. Abbas felt that they were not needed, especially as some of them occupy senior positions in the state.”

The PA has been hit by an acute financial crunch as a result of Israel's withholding around $10 million in funds since February. This could be a motive behind the president's decision. A presidential adviser receives the same salary as a minister, $3,000 per month according to the law, in addition to other rewards and privileges.

Abbas not only fired his advisers, he also issued another decision the same day asking the former government of Prime Minister Rami Hamdallah to return the financial allocations they received during the period preceding his approval of their raises and rewards in June 2017.

According to the text of the decision, published by Wafa, the concerned ministers shall repay these amounts in a lump sum. Also, all ministers who fail to provide proof that they were renting a house during the same period shall be bound to repay any rental allowances they could have received.

Following the discussion of these documents, the government of Prime Minister Mohammad Shtayyeh decided May 31 to refer the issue to Abbas, who decided on the same day to stay the execution of the measures taken by the previous government to increase the salaries of its ministers. Abbas also decided to set the salaries of the current ministers and their advisers as per Law No. 11 of 2004, which capped the prime pinister’s salary at $4,000 and a minister’s salary at $3,000.

The salaries and privileges of advisers and ministers has preoccupied Palestinian public opinion and local media. Activists, journalists and citizens criticized the PA for paying such high salaries to government and presidential officials as it complained of a financial crisis and failed to pay its employees’ salaries.

Abbas' decision came in a timely manner, if not a little late. The financial crisis entered its seventh month, and it was necessary for Abbas to apply austerity measures, starting with his office. The decision to fire his advisers has won Abbas remarkable praise and support from analysts, writers and citizens, mainly on social media.

According to a Facebook post by the spokesman for Fatah, Munir al-Jaghoub, during a meeting in Ramallah June 15 with the Fatah Youth Movement, Abbas said, “We made a mistake but we rectified it. Everyone has to right a wrong. However, continuing to do wrongful things is not acceptable and those who took a penny that was not theirs have to return it.”

Ajyal Radio Network reported June 17 that the president requested that the head of the Palestinian Anti-Corruption Commission, Ahmed al-Barrak, review the files of the previous government’s ministers, starting with the prime minister.

Abbas made the decision after a special committee set up in June submitted a detailed report on the amounts paid to PA senior officials, especially advisers, AFP reported Aug. 19.

Jihad Harb, a writer and political analyst, told Al-Monitor that the president’s decision about his advisers is ambiguous, but he cited three possible reasons behind this step. Harb said that this decision would allow Fatah leaders to dominate the Palestinian political scene should they be appointed as advisers in the future. Second, this is a message to Palestinian society that the president has embarked on an austerity plan starting with his own office, ending the benefits of his advisers and reducing their numbers. “Also, a third reason might be that some of the advisers have proved to be incompetent, advancing their personal interests over the greater interest,” Harb said.

Tawfiq al-Tirawi, a member of the Fatah Central Committee, called on Abbas in a press release Aug. 7 to intervene to stop the encroachment of unnamed officials on state land.

Tirawi said he had previously warned Abbas about this issue and the latter requested his legal adviser to follow up on the issue with the security apparatus.

“I referred to said adviser several times but to no avail. Unfortunately, the encroachments have increased,” Tirawi said.

Khalil Shahin, the director of the Palestinian Center for Policy Research and Strategic Studies - Masarat, told Al-Monitor, “Abbas’ decision is a positive step and should be encouraged because it puts an end to a bad political phenomenon, which is the high number of advisers, some of whom are not competent. This issue had been criticized in the public sphere as a form of corruption.”

Shahin added that since the era of President Yassir Arafat, Palestinian leaders who were not appointed to a main PLO or PA committee would be compensated with an adviser appointment. “Abbas’ recent decision should be an incentive to promote integrity, transparency and to combat corruption and restore public confidence,” Shahin said.

“Advisers work on a consultancy basis," he said. "The president needs a committee of advisers to offer him insight and a vision on strategic, economic and political issues. Finding a competent advisers committee to work with the president has become an urgency to end the random appointment of advisers.”