A win-win solution on the Temple Mount

Many have tried, but always failed, to resolve the issue of tensions occasionally flaring over praying on the Temple Mount/Haram al-Sharif, but the solution is not so difficult. 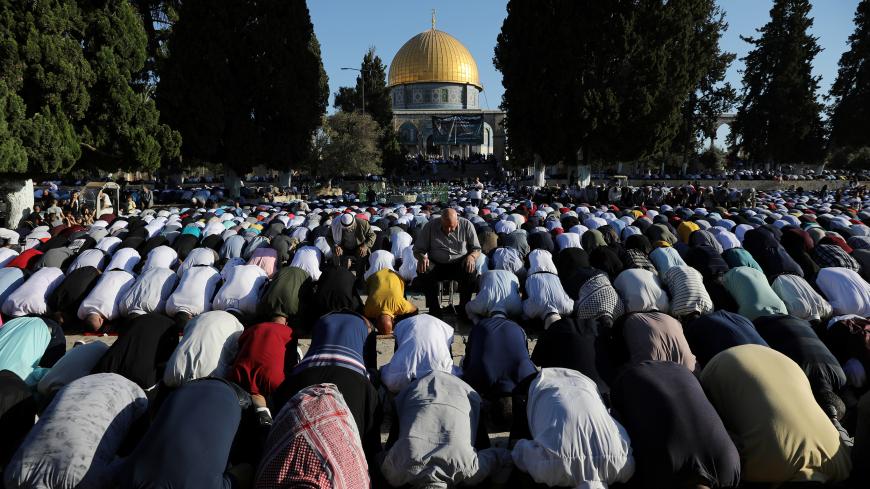 Palestinian men pray as they mark the Muslim holiday of Eid al-Adha on the Haram al-Sharif in the Old City of Jerusalem, Aug. 11, 2019. - REUTERS/Ammar Awad

On Eid al-Adha, the Muslim Festival of the Sacrifice, Jews are prohibited entry to the Temple Mount/Haram al-Sharif compound as per the status quo determined 52 years ago at the direction of Moshe Dayan, the then-all-powerful Israeli defense minister. While Israel claims sovereignty over the Temple Mount, the site is managed by Jordan, through the Jerusalem Islamic Waqf.

It is difficult to explain to a foreigner why this place generates so much division and violence. The leadership regimes of the Israelis and Palestinians are primarily secular, and Orthodox Jews actually oppose visiting the Temple Mount. In fact, the chief rabbinate has decreed that ascending the Temple Mount is forbidden. Following the destruction of the Jerusalem Temple, all Jews for generations to come are considered impure, thus they cannot enter the holy site where the Temple was located. Those Jews who do enter the area are secular or “somewhat religious” national extremists.

According to regulations, Jews are forbidden to pray on the Temple Mount, and if someone is caught mumbling a silent prayer there, he or she is immediately detained and removed from the site. The Israeli Border Police screen those who visit the sacred area, and permission to enter (especially in terms of the age of Muslim male worshippers) depends on the security situation and the estimation of the likelihood of violence erupting between Muslims and Jews.

On the Israeli side, the entry of Jews is sometimes temporarily prohibited and sometimes prohibited for several years. At times entry by members of the Knesset is prohibited, and right-wing extremists set on praying there to prove Israeli sovereignty or to unfurl the Israeli flag are typically barred entry.

While Muslims observe a lunar year, the Jewish year is a combination of a solar and lunar year. Thus, the dates of the two religions' holidays sometimes, though rarely, coincide. This year, for instance, the Ninth of Av, the day of mourning for the destroyed First and Second Temples, began during the Muslim Eid al-Adha, marking the conclusion of the annual pilgrimage to Mecca. Those Jews who enter the Temple Mount despite the rabbinic prohibition, do so especially on the Ninth of Av, and thus 2019 presented the problem of maintaining the status quo by preventing Jews from violating the holiday celebration of the Muslims.

The Israeli security Cabinet decided this year to allow the entry of Jews, in principle, to the Temple Mount for the Ninth of Av, depending on estimations of the risk their entry might entail in light of the level of tensions on the ground. The police decided initially to delay their entry, but later allowed it. Rioting ensued, there were injuries and arrests, but no one was killed. Everyone breathed a sigh of relief.

For more than a quarter century, Israelis and Palestinians have debated a solution to the issue of the Temple Mount. The secular representatives who have attempted to negotiate the future of the Old City of Jerusalem have already considered giving up on sovereignty by any earthly institution and assigning sovereignty to God, agreeing on mutual sovereignty and establishing a committee with the participation of several Muslim countries along with the United States and Israel to manage the site, which isn't even a square kilometer (0.4 square miles) in size. All sorts of solutions have been suggested, but none adopted. Pseudo-historical and half-religious claims provocative to the other side have always lurked at the margins of the talks.

For instance, the late PLO leader Yasser Arafat remembered from his youth how Jews prayed in the narrow span between the Western Wall and the Mughrabi neighborhood, which Israeli destroyed at the end of the 1967 Six-Day War. He knew that the Jews' faith does not allow them to visit the Haram al-Sharif and therefore did not understand why they would want to do otherwise. He invoked his archaeological “knowledge” to claim that the Temple had actually been in Samaria on the West Bank, not in Jerusalem.

The Israeli side often repeated that Jerusalem is never mentioned in the Quran, but is cited an infinite number of times by that name and others in the Hebrew Bible. This reasoning was to cast doubt on whether the Prophet Muhammad indeed rode the flying horse Al-Buraq from Mecca to the “outer mosque” and from there ascended to heaven. In fact, in Islam the Haram al-Sharif is only the third holiest place, after Mecca and Medina, while for the Jews there is no holier place in the world! Regardless, neither side has been convinced by the other's historical analyses.

The most reasonable solution is the one reached in the Geneva Initiative (2003), according to which sovereignty over the Temple Mount would be transferred to the Palestinian state established through negotiations while Israeli sovereignty over the Western Wall would be recognized. That, however, is insufficient.

The Israeli right claims that Israel has failed to assert its sovereignty over the Temple Mount, walks on tiptoe when it comes to the issue and gives in to pressure in order to avoid reliving the events of 1929 that led to the massacre of the Jews in Hebron or to the second (Al-Aqsa) intifada, sparked in September 2000 when opposition leader Ariel Sharon provocatively entered the Temple Mount compound accompanied by a thousand men. While the right is correct that Israeli sovereignty hasn't been implemented over the Temple Mount, it doesn't mean that it should be. Rather, Israelis must rethink the significance of this sovereignty, which no entity in the world recognizes, including the US administration of Donald Trump.

Israel conceding sovereignty over the Temple Mount would essentially be a concession of something that Israel doesn't actually possess and that it doesn't need to possess. In the framework of a future peace accord between Israel and a Palestinian state, it would be possible to decide that sovereignty be transferred to a Palestinian or Muslim body and that the status quo that Israel unilaterally imposed after the occupation of East Jerusalem be annulled.

The alternative must entail that anyone who wishes to enter the Temple Mount after it's determined that he poses no security risk is allowed entry and anyone who wishes to pray at the site be allowed to do so, even if it means erecting another building for worship. Prayer could be limited to certain hours or days. Thus, for instance, if a Muslim holiday clashes with a Jewish holiday, several hours of entry and prayer could be allowed for Jews and several others for Muslims without hurting anyone's feelings and avoiding heightened tensions before each holiday for fear that the unnecessary hatred erupts again.

The Palestinians would have sovereignty over the Haram al-Sharif in their hands, a historic gain, while the Jews who wish to enter the complex despite the rabbinic prohibition would not have to hide their mouths as they mumble their prayers. Each could live by his own faith.